Berberine is an herbally-derived supplement with a laundry list of health benefits. Among the most noteworthy berberine benefits: It’s one of the few supplements that has been shown to work as well as prescription drugs in clinical trials[*].

Berberine can reduce inflammation, lower your blood sugar levels, improve your gut health, and help protect your heart. Studies suggest it has an array of other health benefits and minimal side effects.

Berberine is an isoquinoline plant alkaloid derived from the amino acid tyrosine.

It occurs naturally in a variety of plants, including:

Therapeutic use of berberine by humans date back to 3000 B.C.E or earlier[*]. The first recorded mention of berberine as a medicinal herbal compound was in the ancient Chinese book “The Divine Farmer’s Materia Medica”[*].

Berberine has a bitter taste and is found in many systems of traditional botanical medicine. Asian traditional medicine systems tout berberine for its properties of clearing damp-heat, quenching fire, and counteracting poison[*].

How Does Berberine Work?

Berberine works in various ways in different tissues and organ systems. But a primary mechanism of action is through the AMPK (AMP-activated protein kinase) pathway[*][*].

Scientists have called AMPK a  “metabolic master switch”[*]. AMPK is found in cells of different organs throughout your body, including your heart, brain, kidneys, liver, fat cells, and muscle tissue[*].

Berberine also affects DNA transcription (turning genes on or off), receptor expression (controlling the behavior of cells), and the interaction of other molecules with cells in your body, including antioxidants[*][*][*][*].

Researchers initially assumed that oral absorption of berberine was poor because they found low blood levels of the compound. But newer evidence suggests that berberine is well-absorbed, but quickly metabolized by your body.

When you take berberine, it’s rapidly absorbed and then transformed in your liver — so quickly that it’s impossible to measure in your blood. Most of the effects of berberine in your body probably come from metabolites (byproducts) of berberine created after you take it[*].

Here are some of the berberine benefits that can be good for your health. 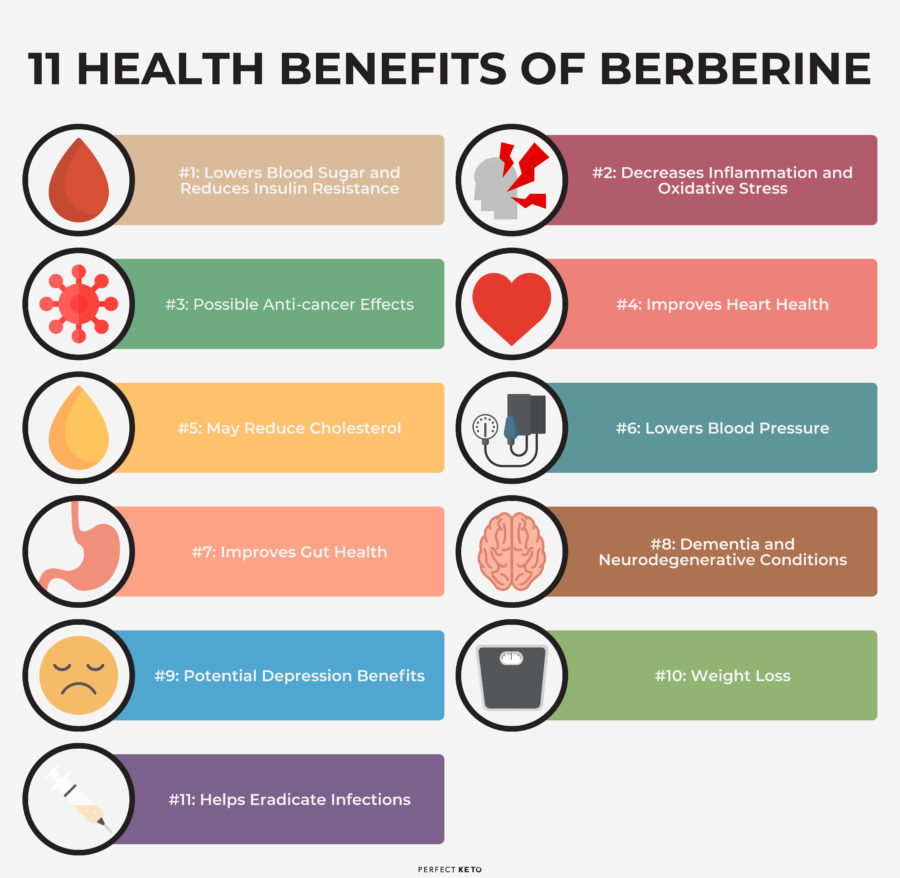 The effects of berberine on type 2 diabetes patients are comparable to those of metformin, a popular prescription diabetes drug[*].

A meta-analysis of 14 studies found that berberine is equally effective for improving insulin sensitivity and lowering blood sugar as prescription drugs metformin, glipizide, and rosiglitazone[*].

In a three-month-long study of 116 people with diabetes, a gram per day of berberine lowered their fasting glucose by 20% to healthy normal levels, reduced their hbA1c by 12%, and improved their cholesterol and triglyceride levels[*].

Berberine pairs well with healthy lifestyle changes and also works in conjunction with other drugs for lowering blood sugar[*]. In a rat study, berberine even protected against metformin-associated lactic acidosis, a medical complication that can occur in people who take the drug metformin[*].

Excessive inflammation and oxidative stress are related to many conditions, including[*][*][*][*][*]:

In your body, a delicate balance exists between reactive oxygen species (ROS) and antioxidants.

An unhealthy diet or certain health issues, like insulin resistance, can increase ROS formation, tipping the balance towards an inflammatory state.

But anti-inflammatory foods and plant compounds can help reduce inflammation in your body, protecting the cells of your brain, heart, and central nervous system.

Berberine exhibits anti-inflammatory and antioxidant effects in animal and human studies[*]. It is also proven to reduce inflammation in humans, in part through the AMPK pathway and by improving the metabolism of glucose (sugar)[*].

These pathways control inflammation levels in your body by affecting cell survival, DNA transcription, and the production of inflammatory signaling chemicals called cytokines.

While no human cancer trials exist using berberine, one group of scientists researching berberine has called it “an epiphany against cancer”[*].

Inflammation, oxidative stress, and insulin resistance are all linked to an increased risk of cancer, so it’s not surprising that berberine may help prevent the growth of cancerous cells[*].

Berberine inhibits cell proliferation (growth), which makes it harder for cancer cells to grow and spread[*][*]. It also works to fight cancer by improving mitochondrial function[*].

It may also help with cancer cachexia, the wasting syndrome associated with cancer[*].

As with cancer, inflammation and insulin resistance increase the risk of heart attack and other serious cardiovascular problems[*][*]. Berberine may help protect your heart by reducing inflammation, as well as in cardiac tissues[*].

A study using both in vitro methods and human subjects concluded that berberine improved heart health and decreased injury to the heart by preventing cell death through the AMPK pathway[*]. It also reduced the participants’ blood levels of C-reactive protein and other markers of inflammation[*].

In a separate study of 156 heart failure patients, 1.2 to 2 grams of berberine given daily for eight weeks improved their quality of life, strengthened their heart function, and reduced their risk of death[*].

Berberine reduces inflammation in the endothelium, the smooth cells lining your veins and arteries[*].

In vitro evidence suggests that berberine may also prevent heart arrhythmias from occurring[*].

Berberine appears to be effective for treating dyslipidemia (the technical name for high levels of “bad” cholesterol)[*].

One way berberine improves cholesterol is by increasing the number of LDL receptors to control LDL cholesterol levels more effectively[*]. It also reduces the synthesis of lipids (cholesterol and fat molecules) in the liver[*].

Some trials have shown that berberine is safe and effective for lowering blood pressure.

Berberine’s effects on blood pressure and blood flow are likely due to increased bioavailability of nitric oxide (a molecule that relaxes blood vessels) and inhibition of ACE (angiotensin-converting enzyme)[*].

Because type 2 diabetes, high cholesterol, and high blood pressure often occur together, some scientists have suggested that berberine could be an ideal first-line therapy to help with these issues, especially in patients who have difficulty affording expensive prescription drugs[*].

In traditional medicine, berberine has been used to relieve diarrhea[*].

Recent studies of berberine confirm that it has significant effects on gastrointestinal function and health and is therapeutically promising for diarrhea, gastroenteritis, and inflammatory digestive issues[*].

At this point, it won’t surprise you to learn that dementia, Alzheimer’s disease, and other neurodegenerative diseases like Parkinson’s have an inflammation component to their formation and progression[*].

Insulin resistance and chronic inflammation increase your odds of dementia and other neurological issues, which is why berberine can help improve your long-term risk factors for these conditions[*]. It also helps protect cells in your brain and nervous system from damage[*][*].

At this time no large human trials have been conducted to investigate berberine’s role in neuroprotection, but there are several promising animal studies[*].

A study of rats who were given toxic heavy metals to cause a condition similar to Alzheimer’s showed that berberine improved their cognitive behaviors and protected against memory impairment through its anti-inflammatory and antioxidant effects[*].

A study on the effects of berberine in rats with an Alzheimer’s-like condition found that it protected against memory impairment, reduced oxidative stress, and increased the rats’ brain antioxidant levels[*].

In diabetic rats with vascular dementia, berberine reduced inflammation and reversed impairments in learning and memory[*].

Preliminary evidence suggests that berberine could be a helpful supplement for people with depression[*].

By inhibiting inflammation and oxidative stress, berberine might reduce the likelihood or severity of depression.

Another way berberine may help in depression is by increasing production of the neurotransmitters serotonin, dopamine, and noradrenaline — similar to how many prescription antidepressants work[*].

Numerous studies in rats and mice demonstrate an antidepressant effect of berberine in different situations[*][*][*][*].

Berberine can also reduce the weight gain side-effects of antipsychotic medications in rats, and potentially in humans[*].

#10: May Help With Weight Loss

Berberine may be effective as a supplement for weight loss. Berberine can enhance weight loss by regulating insulin, adiponectin, and leptin.

It also may inhibit the growth of fat cells and stimulate the conversion of white adipose tissue to brown adipose tissue, which improves metabolism and fat-burning[*][*][*][*].

In one 12-week study of obese people, 500 milligrams of berberine taken three times daily caused an average of 5 pounds of weight loss[*].

In a separate 12-week study of obese men and women with metabolic syndrome, 300 milligrams of berberine taken three times per day reduced their body mass index (BMI) from 31.5 to 27.4 (from “obese” to “overweight”). The participants also lost belly fat and experienced other related health benefits[*].

Multiple studies show a positive correlation between berberine and the outcome of infections.

How to Take Berberine

In most of the studies mentioned in this article, participants took between 900 and 1500 milligrams per day of berberine orally. If you want to try berberine, consider taking 500 milligrams two to three times daily, before meals, with a glass of water.

Berberine powder is extremely bitter tasting and can stain your hands and mouth yellow. You are better off taking berberine capsules.

While berberine teas are available, there’s no added benefit from drinking berberine tea (unlike Gymnema sylvestre), and it’s less convenient compared to pills.

Most trials showcasing berberine benefits take two to four months of usage, but a few studies use berberine for up to a year with no negative consequences.

If you want to use berberine to improve your insulin sensitivity, reduce your cholesterol, or lower your blood pressure, be sure to give it time to work and measure your results over time.

For fans of traditional Chinese medicine, Rhizoma coptidis (Huang Lian or coptis) is a berberine-containing herb with a long history of therapeutic use.

Try 2 to 10 grams of Huang Lian powder, or 15 to 60 milliliters of tincture, a couple of times per day if you want to imbibe berberine the traditional way.

Berberine is remarkably safe, especially considering it performs as well as some prescription drugs[*]. Its toxicity is so low that there are numerous studies where no participants reported any side effects[*][*].

The most common side effects of berberine are digestive issues. There have been reports of stomach pain, cramping, constipation, diarrhea, and flatulence[*][*]. In studies where these effects were reported, they were usually temporary[*].

Because berberine lowers blood glucose, it has the potential to cause hypoglycemia (low blood sugar).

This effect is unlikely for most people, but if you have diabetes or take insulin or other drugs for blood sugar control, speak to your doctor before you take berberine, as it could enhance the hypoglycemic effects of prescription diabetes drugs.

Berberine can inhibit CYP3A4 and other enzymes in your liver that metabolize certain drugs, which may cause drug interactions. When these enzymes are inhibited, the effects of drugs like cyclosporin, lovastatin, clarithromycin, indinavir, sildenafil, and triazolam can be increased.

If you’re taking these or other drugs, ask your doctor whether you can take berberine safely.

If you are pregnant or breastfeeding, don’t take berberine. There’s no evidence that it’s safe for infants, so it’s best to play it safe.

The Bottom Line on Berberine Benefits

Berberine is a powerful yet relatively safe supplement. Some of the berberine benefits include positive effects on blood sugar control, inflammation, heart health, cholesterol, gut health, and perhaps even depression.

If you suffer from these issues, you should consider taking berberine.

If you’re currently healthy, berberine may be a good choice for protection against dementia, cardiovascular disease, and other problems associated with inflammation.

No one should blindly take a supplement without any reason. But if you’re looking for a highly effective health supplement with minimal risk, berberine should be at the top of your list, especially if you’re overweight or have insulin resistance.

2 thoughts on “Berberine Benefits: 11 Remarkable Health Benefits of This Supplement”