If you’ve been struggling with weight gain, the question “do calories matter?” has likely crossed your mind once or twice.

Some authorities talk about being in a calorie deficit like it’s the golden ticket to weight loss. Others claim long-term fat loss has more to do with a whole food diet plan and your activity level than calorie counting.

And what if you’re following a low-carbohydrate diet? Does the type of food you eat affect whether or not you need to count calories?

There are a lot of opinions out there advising how to fight body fat. Let’s take a look at what the science says.

One calorie (or Kcal) is the amount of energy it takes to heat one kilogram of water by one degree Celsius.

In other words, calories measure the amount of energy in your food. So when you refer to the calories in your food, you’re actually talking about how much energy your body can get out of what you’re eating.

Let’s break it down a bit:

All day every day your body is using energy (AKA calories) to keep things running smoothly. In fact, the average adult burns somewhere between 1800 and 2600 calories per day[*]. This energy is either coming from the food you ate, or from your fat stores.

So when it comes to weight loss, how your body is using calories plays a considerable role.

Not All Calories Are Created Equal

“CALORIES IN VS. CALORIE OUT” IS OVERSIMPLIFIED

For a long time people talked about weight loss as a simple “calories in, calories out” equation. The idea is that if you just burned more calories than you ate, you should lose weight.

In theory, this makes sense, and fundamentally it holds true. However, not all foods affect your body the same way, and not all calories are created equal.

“Calories in, calories out” is a bit too simplistic. Let’s take a look at the nuances of the calorie equation.

The thermic effect of food (TEF) is a concept that illustrates how much energy it takes for your body to break down certain foods.

For instance, your body has to work harder to break down protein than it does carbohydrates. It puts in more effort, which means more calories are burned, so the thermic effect of protein is higher than that of carbohydrates[*].

In fact, the TEF for protein is 25%, meaning 25% of the calories you eat from a protein source actually go into breaking down that food. For carbohydrates, that number is only 8%.

YOU DON’T BURN ALL CALORIES THE SAME WAY

Oxidative priority is another concept that exemplifies how all calories are not created equal.

As mentioned earlier, your body runs a tight ship when it comes to the fuel in your blood. Researchers have coined the term “oxidative priority”, or “oxidative hierarchy” to explain how your body chooses which types of fuel to use first when there are several options present in the bloodstream[*]. Oxidation is just another way to say “fuel burning”. 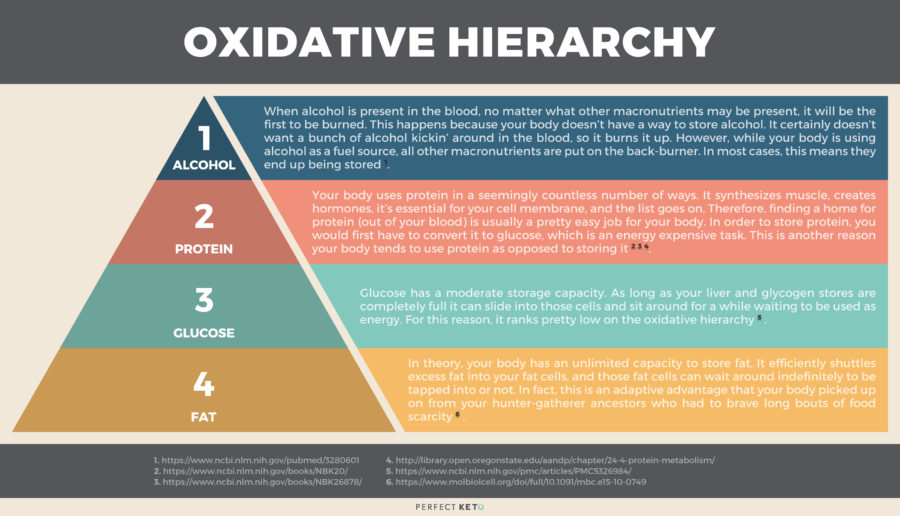 As you can see, calories coming from different macronutrients create a vastly different metabolic effect.

The first one is pretty self-explanatory, but hunger and cravings are a little more nuanced.

If you want to avoid cravings, you need to look at what you’re eating. Different foods can have a significant effect on your satiety and cravings, and ultimately your resolve to stick to your diet.

Protein is the most satiating macronutrient[*]. After eating a protein-rich meal, you will most likely feel more full and be less likely to reach for a sugary snack. Several studies have found that higher-protein diets are very successful for sustainable weight loss[*][*][*].

In addition to its satiety-inducing effects, protein may also increase your body’s sensitivity to the hunger hormone leptin. As a reminder — leptin is responsible for telling your brain that you are full and don’t need any more food[*].

Sugar, on the other hand, can trigger an addictive-like reaction in some people. The concept of “sugar addiction” has even been thrown around as one of the possible causes of obesity in the United States[*][*].

You can see how eating a 200 calorie snack coming from protein would have a much different effect on your diet goals than if you ate the same number of calories from sugar.

A final point to make on the “why all calories are not created equal” topic is the concept of food quality.

Let’s say you eat two meals –they’re both protein-rich, have the same number of calories, the TEF and oxidative priority are equal, but the quality of the food is different.

These two meals should have the same metabolic effect in your body, right?

You might think so, but when you consume calories that come from whole foods, you’re getting a wide variety of nutrients along with them. Whole foods are naturally rich in vitamins, minerals, and enzymes. All of these nutrients keep your metabolism running the way it should, which can make a difference when it comes to how satisfied you feel after a meal, as well as how many calories you burn[*][*][*].

On the other hand, getting the same macronutrients and calories highly processed foods that are devoid of nutrients can leave your body feeling unsatisfied and wanting more.

Calories Matter on a Ketogenic Diet

If your goal is weight loss, then you need to be aware of calories, even on a ketogenic diet.

When you’re eating keto, you’ll notice a natural decrease in appetite. Many people end up eating less because they feel more satisfied with less food and are no longer fighting sugar cravings[*]. A ketogenic diet is also quite thermogenic. A recent well-controlled study found that people in ketosis burn about 300 more calories a day than people who are not in ketosis, likely because of thermogenesis[*].

Keto can make you feel more satisfied with less food, while also increasing the calories you burn per day. That’s a great recipe for weight loss, and it highlights the importance of paying attention to what you eat, not just how much you eat.

However, if you do end up eating more calories than your body needs, they’ll still get stored as fat, even if you’re in ketosis. This is where, at a fundamental level, calories in calories out holds true.

What About Exercise for Weight Loss?

Exercise can be a big help when it comes to weight loss. It burns body fat, suppresses appetite, and increases muscle mass, which ultimately speeds up your metabolism (muscle burns more calories than fat does).

However, as the saying goes, you can’t outrun a bad diet.

So while exercise is great, it’s not an excuse to eat poorly. You’ll end up struggling to lose weight[*].

Keto is an amazing tool for weight loss. It can help you feel full with less food and it will speed up metabolism to help you burn more body fat. However, that doesn’t mean calories don’t matter. You should pay attention to your calories, even on a keto diet.

Weight loss is always hard, but keto makes it significantly easier. If you’re struggling to lose weight, it’s worth your time to try keto.

And if you don’t already know how many calories you should be consuming every day, our Keto Macro Calculator can help you figure out exactly how much fat, protein, and carbohydrate to eat for sustainable weight loss.