Is Aspartame Keto-Friendly? The Truth About This Diet Soda Ingredient

For decades, soda has caused some serious health concerns. Not only are these carbonated drinks packed with sugar, but they’re also filled with other potentially harmful artificial ingredients. This is why many soda lovers resort to Coke Zero, Diet Coke, and other diet sodas to satisfy their cravings — many of these include aspartame. So is aspartame keto-friendly?

While these sugar-free beverages have a lower carb count, the truth is that they may be worse than regular soda or fruit juice. Sure, they contain zero calories, zero carbs, and no sugar with the same sweet taste as high-carb drinks. But that’s because they’re sweetened with aspartame, an artificial sweetener that can be detrimental for your health.

What Is Diet Soda?

Diet soda is a carbonated beverage with table sugar taken out. In its place, manufacturers include a zero-calorie sweetener, or sugar alcohol. By removing sugar, the beverage loses its calories, sugar, and carb content.

To better understand diet soda on keto, take a look at one of the most popular brands today: Diet Coke. One serving of Diet Coke contains: 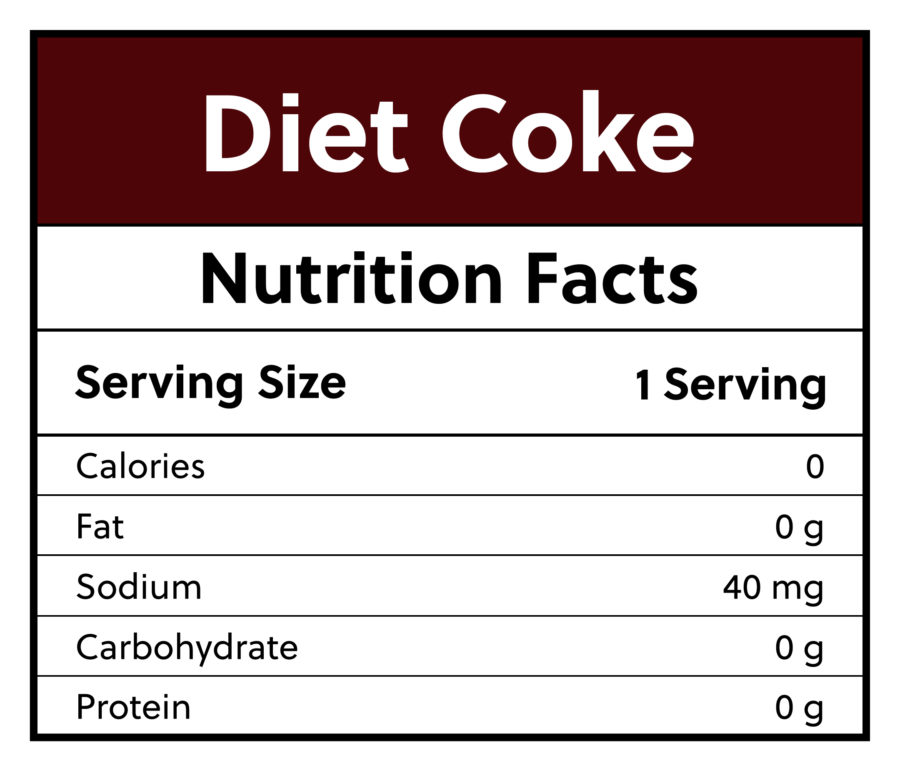 As you can see, diet soda doesn’t give you much nutritional value. With its basic mixture of carbonated water, artificial sweeteners, colors, and other additives, there’s no significant nutrition to be found in this beverage.

But even though the ingredients are nutritionally void, they do affect your health in multiple ways. For one of the top name brands out there today, the ingredients include:

*The “caramel coloring” is made by heating up corn or cane sugar to reach the desired caramel color.

Aspartame is a sugar-free, low-calorie sweetener. Aspartame can be found in (or referred as) Splenda, Sweet n’ Low, Equal, sucralose, saccharin, and Nutrasweet.

Unfortunately, the third chemical compound in aspartame, methanol, is easily converted to “free methanol” in hot temperatures. Once in this state, free methanol converts to formaldehyde[*].

Formaldehyde is a carcinogen that has the ability to cross the blood-brain barrier, which is a filter of capillaries that carry blood to the brain and spinal cord[*].

It’s not surprising then that aspartame has been linked to multiple health concerns, including:

Yikes. Perhaps drinking Diet Coke, Diet Pepsi, or any other diet soda is worse than you thought.

But you might still be wondering, since these beverages contain zero sugars, is diet soda keto-friendly?

Does Diet Soda Fit Into a Keto Diet?

Sure, diet soda may be a zero calorie and zero carb drink, but the artificial ingredients found in it don’t support the health goals of the keto diet.

The ketogenic diet is a complete metabolic transformation that puts your body in fat-burning mode instead of glucose-burning mode so you can reap numerous health benefits including more energy, an improved mood, weight loss, fat loss, and greater mental clarity and focus.

However, drinking low-carb beverages filled with artificial ingredients may do the opposite of what you want to accomplish with a healthy low-carb, high-fat diet.

Even if diet soda keeps your daily carb intake low, doesn’t raise your blood sugar, and doesn’t affect your ketone levels, the negative drawbacks far outweigh the benefits. Diet soda has been shown to damage many of the bodily functions a ketogenic diet would otherwise improve.

Aspartame can prevent weight loss, harm your metabolism, and contribute to conditions like:

Some of these problems actually seem to be worse in people who consume diet soda instead of regular soda.

Negative Side Effects of Aspartame, As Backed By Science

Is aspartame keto? It might sound counterintuitive that a sugar-free, low-carb soda would be worse for you than a sugar-loaded one, but it’s true.

In fact, one study showed the risk for depression increased for those drinking diet soda instead of regular soda.[*][*].

That’s not the only surprising statistic.

People who consumed diet soda over a long period of time also showed a 30% decrease in proper kidney function. This was a study conducted at Harvard over the course of a 20-year period[*][*].

Want more evidence? Cardiovascular disease is one of the top killers in the United States today, and diet soda may be a silent contributor. In a 10-year study that involved 2,000 adults, researchers found that those consuming diet soda on a daily basis were more likely to experience a stroke or heart attack[*].

Artificial sweeteners also affect your metabolism. When you consume them, your body detects a sweet taste and expects a corresponding increase in blood glucose and insulin levels. But because it’s a low-carb sweetener, this doesn’t happen. Over a long period of time, these mixed signals can trigger metabolic syndrome and type 2 diabetes[*].

This clearly shows diet soda is not only unhealthy for you, but it’s even worse than your regular sugar-filled soda.

Sugar Substitutes to Consume Instead of Aspartame

The allure of sugar alcohols like aspartame is that they contain zero sugar. However, there are plenty of other zero-sugar sweeteners that are much more beneficial to your health.

Monk fruit, stevia, erythritol, and Swerve are the four best sweeteners on a low-carb diet. Unlike natural sweeteners — honey, molasses, and cane sugar, for example — these four alternative sweeteners contain zero calories, zero sugar, and rank zero on the glycemic index. In other words, they won’t raise your blood sugar levels.

And unlike sugar alcohols and artificial sweeteners including acesulfame, xylitol, and aspartame, they don’t come with negative health effects or a bitter aftertaste.

It doesn’t matter that it’s carb-free and calorie-free — diet soda is particularly damaging to your health. The bottom line is that aspartame is not keto-friendly — it has been linked to a number of negative side effects, including depression, poor kidney function, and an increased risk in heart disease and type 2 diabetes.

Diet Coke and other diet sodas might be a go-to beverage for people who think they are following a healthier lifestyle, but these artificially sweetened drinks are not suitable for a keto diet (or any healthy diet for that matter). There are far better keto drinks that let you stay in ketosis and support a healthy ketogenic diet, such as sparkling water.

Instead of drinking beverages (or eating foods) sweetened with aspartame and other harmful artificial additives, look for those sweetened with monk fruit, stevia, or another keto-friendly sweetener.

Or, better yet, review this list of keto-friendly drinks to discover healthier options that will quench your thirst and won’t harm your health. (Naturally, water ranks at the top of the list.) Once you know what your options are, it’ll be much easier to avoid diet soda and then you can enjoy the multiple health benefits of a low-carb, keto diet.

11 thoughts on “Is Aspartame Keto-Friendly? The Truth About This Diet Soda Ingredient”