Ginkgo Biloba: How It Can Give You Clarity and Focus - Perfect Keto

Could a fossil improve your memory, boost your brainpower and fight off diseases?

Yes. The living fossil more commonly known as ginkgo biloba or maidenhair herb has been used to in Traditional Chinese Medicine for thousands of years to treat everything from poor memory to fatigue to sexual dysfunction.

If you’re having trouble staying focused or frustrated by forgetfulness, read on to discover how ginkgo biloba how can help. You’ll discover:

The Interesting History of Ginkgo Biloba

Another common name for ginkgo biloba is maidenhair, and it’s native to China, Japan and Korea. The name itself is a misspelling of the Japanese word gin kyo, which means silver apricot.

If you ever want to plant these 30-meter tall trees, you may want to look them up by the name maidenhair tree. It’s the same plant without the buzzword pricing.

This ancient plant was first introduced to Europe and the United States back in 1730s and 1780s respectively.

Ginkgo Biloba is known as a living fossil because it’s the only remaining species of the Ginkgophyta division, as all the other ones have gone extinct.

Since it’s been part of traditional chinese medicine for thousands of years, research is now uncovering its properties and health benefits. 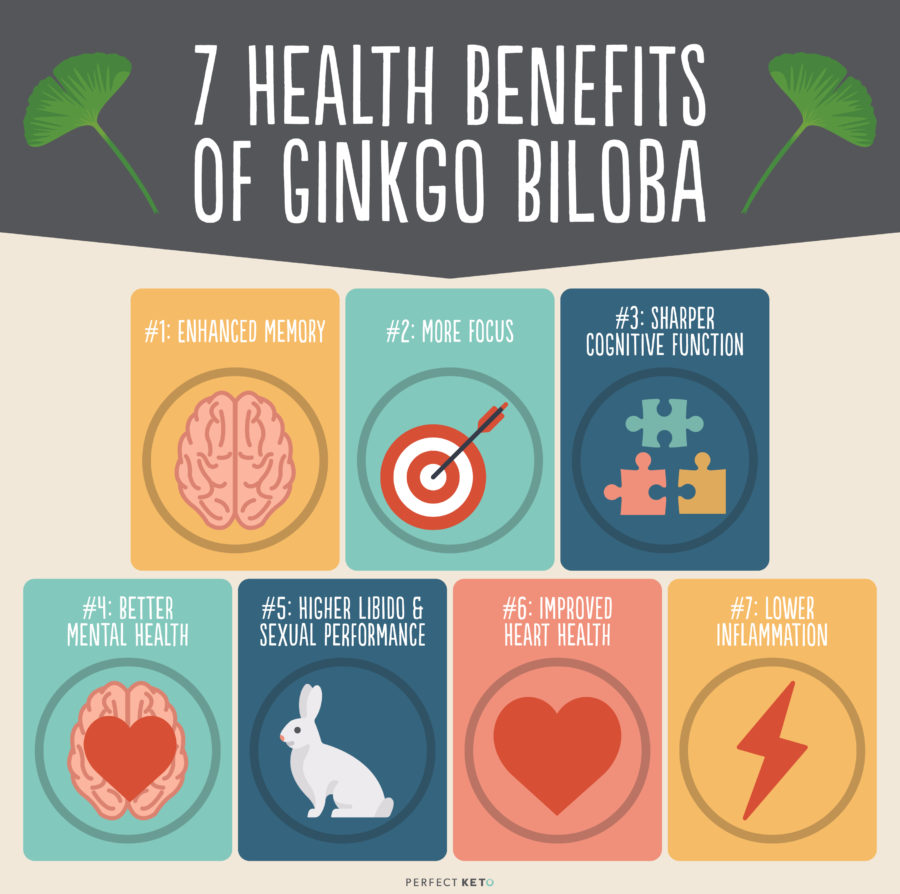 Ginkgo Biloba is commonly taken as a nootropic — a brain booster or cognitive enhancer to get more done.

It also has strong antioxidant, anti-inflammatory, and circulatory properties[*] that has made it helpful in the treatment and prevention of:

Research finds that supplementing with ginkgo biloba can provide these seven health benefits:

One of the strongest effects of ginkgo biloba supplementation is a boost in short-term and long-term memory.

Studies have shown that supplementing with ginkgo biloba leaf extract…

By improving your memory, this herb indirectly helps with stress reduction. Being able to recall the important details in life instead of constantly feeling you’re forgetting something is a relief and makes you more effective both at work and at home.

When you’re constantly unable to focus or finish the work at hand, it not only impacts your job performance, but also worsens your relationships and happiness.

Ginkgo biloba has been used to help treat ADHD in several studies[*][*] and patients have experienced significant improvements.

This research supports the use of ginkgo biloba as a treatment for scattered, unfocused thinking in traditional chinese medicine.

If you’re struggling to focus at work or school, supplementing with a high quality nootropic blend that uses ginkgo biloba, such as Perfect Keto Nootropic, can help boost brain power.

Takeaway: Ginkgo biloba can heighten focus and may even fight ADHD symptoms.

As you age, it’s normal to experience some cognitive decline or cognitive impairment. The most common condition associated with aging is dementia.

Supplementing with ginkgo biloba has been found effective against dementia with little side effects[*], according to a meta-analysis of randomized placebo-controlled trials involving over 2000 people.

Other research has found similar results:

Along with helping with memory, focus and cognitive function, ginkgo biloba leaf extract has been shown to reduce mental health problems both on its own and as part of an overall treatment.

Ginkgo supplementation has helped with conditions such as:

A 2015 meta-analysis study published in the CNS and Neurological Disorders Journal found that ginkgo biloba extract was a potential viable treatment for several mental health problems including anxiety, depression, dementia and schizophrenia[*].

Takeaway: Ginkgo biloba can help in the treatment of mood disorders such as anxiety and depression, as well as more serious mental health issues like schizophrenia.

Ginkgo biloba can help both your sex drive and sexual performance thanks to its anti-inflammatory, antioxidant and circulation-improving properties.

It has the ability to increase blood flow to your entire body, including your genitals. For men, this translates to improved erectile quality and that’s why you can find it in many herbal erectile dysfunction blends.

Adequate blood flow to genitals is just as important for women because it helps to increase and sustain sex drive.

If you’re on antidepressants, ginkgo biloba can be especially helpful for fighting low sex drive.

The class of antidepressants known as SSRIs is notorious for negatively impacting libido. Ginkgo biloba extract supplementation has been shown to reverse this negative side effect of the drug while contributing positively to mental health.

Ginkgo biloba is known for its ability to improve blood circulation, which is excellent for heart health.

It can also lower blood pressure and prevent the formation of clots in your blood vessels, which keeps your cardiovascular system running smoothly.

The majority of diseases can be traced back to chronic inflammation.

Ginkgo biloba has powerful anti-inflammatory properties that reduce chronic inflammation in your body and therefore help prevent the onset of inflammation-caused diseases.

One study found ginkgo bark was effective for both preventing and treating inflammatory and metabolic diseases, such as diabetes[*].

Takeaway: Ginkgo biloba has anti-inflammatory properties that reduce chronic inflammation in your body.

Now that you know the perks of supplementing with this herb, it’s important you know what to look for when shopping for one.

How to Buy and Store Ginkgo Biloba

When shopping for a ginkgo biloba supplement, follow these tips:

To store your ginkgo, simply keep it at room temperature or slightly below it.

Ginkgo biloba leaf extract comes with very few safety precautions or concerns. Due to its powerful blood flow-boosting effects, it is not recommended for people who are on blood thinning medications or have medical conditions that result in poor ability to clot blood.