You’ve likely heard about the upsides of fish oil supplements, but krill oil benefits can be particularly potent. Not only does this oil include the same anti-inflammatory properties as an omega-3 fatty acid fish oil supplement, but it offers additional antioxidants and phospholipids.

This guide will inform you about many krill oil benefits, how the supplement works, how to take it, and other essential information that will help you decide whether you want to add it to your keto diet plan.

What Is Krill Oil?

Krill oil contains the omega-3 fatty acids eicosapentaenoic acid (EPA) and docosahexaenoic acid (DHA). While the metabolic effects of krill oil are similar to those of fish oil, unlike fish oil, krill oil also provides antioxidants and phospholipids, which enhances its stability and bioavailability[*][*].

The word “krill” means “whale food” in Norwegian. While there are at least 85 known species of krill, most krill oil is harvested from Euphausia superba (Antarctic krill), a small, reddish-pink, shrimp-like crustacean about two inches in length found in the oceans of Antarctica.

Krill are an essential component of marine ecosystems — they feed on microscopic, single-celled phytoplankton (this is where the DHA comes from), and in turn, provide nourishment to birds, squid, fish, and whales.

Because krill are smaller and lower on the food chain than most fish, they don’t bioaccumulate toxins as big fish do. As such, they contain less mercury and other contaminants than larger marine species — a significant reason why more people are looking to krill over fish oil for their omega-3s[*].

How Does Krill Oil Work?

The main constituents of krill oil are the polyunsaturated fatty acids EPA and DHA, which are also found in fish oil. The fat content of live krill ranges from about 12-50%, depending on the season[*][*].

When you eat seafood or take omega-3 supplements like krill oil, omega-3 fatty acids can decrease systemic inflammation, lower your cholesterol, and reduce the risk of your blood platelets forming dangerous clots[*][*]. Systemic inflammation can lead to a host of health issues, including autoimmune disorders like rheumatoid arthritis.

Along with EPA and DHA, krill oil contains other fatty acids, including:

Phospholipids like phosphatidylcholine in krill oil not only improve the bioavailability of EPA and DHA, they also have brain and cellular health benefits thanks to their anti-inflammatory and antioxidant properties[*][*][*][*].

Krill oil contains vitamins A, vitamin E, B12, and folate, all of which are great for reducing and preventing inflammation and supporting brain health[*].

And because krill feed on marine phytoplankton, krill oil also contains astaxanthin, a carotenoid that can cross the blood-brain barrier and protect your brain and central nervous system from oxidative stress[*][*].

The health benefits of krill oil are many. They overlap with those of standard fish oil, in that they’re rich in omega-3 fatty acids. But they also stand apart in a number of ways. Here are 10 top krill oil benefits. 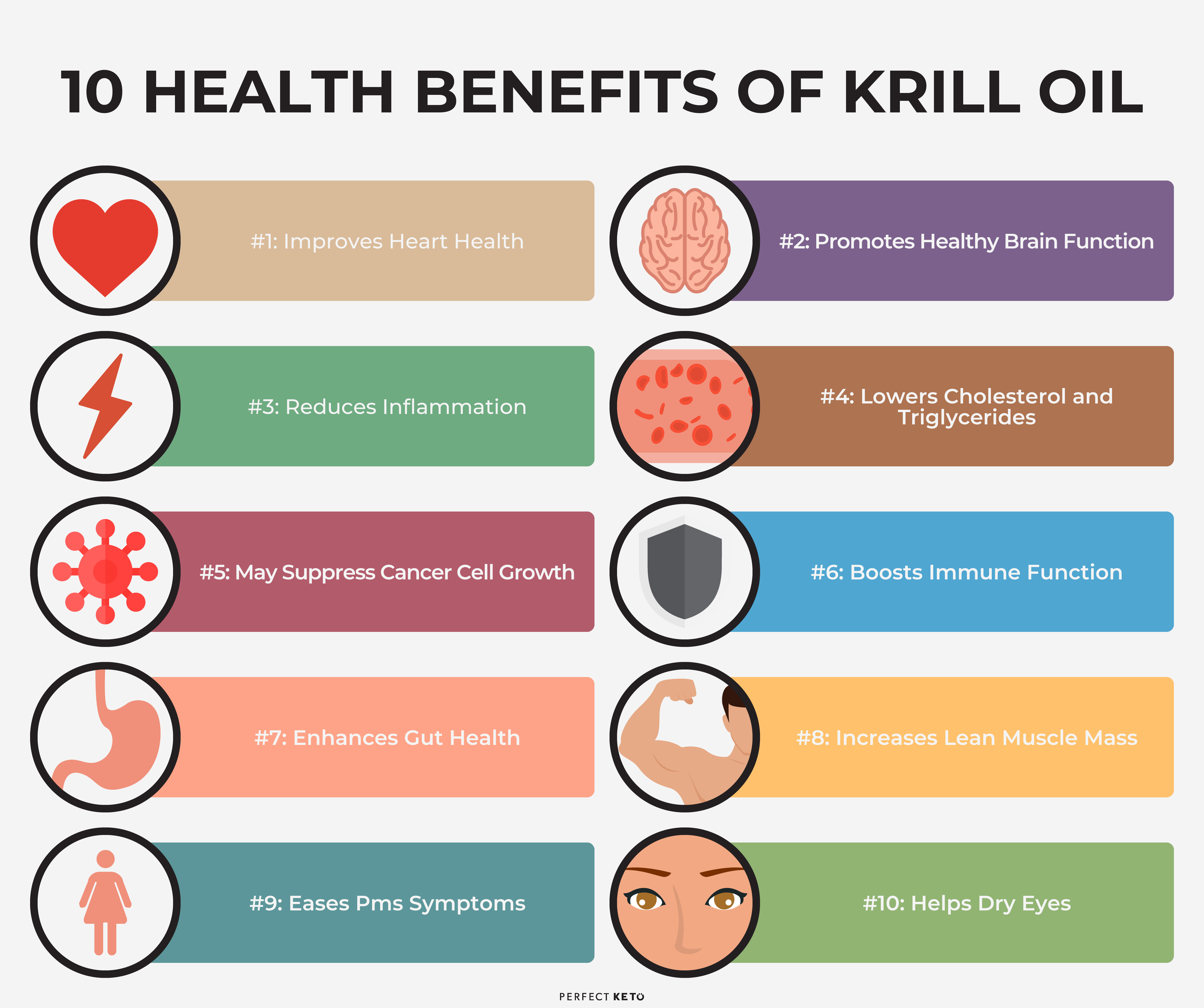 Heart disease is the number one killer of adults in developed countries, but taking omega-3 supplements like krill oil supports heart health and may reduce your risk of heart disease[*].

Krill oil does this in a couple of ways. Krill oil has been shown to increase HDL (“good”) cholesterol levels in people with high cholesterol, which is associated with a lower risk of heart problems[*].

Some human studies of krill oil supplementation have shown that krill oil can reduce C-reactive protein, an inflammatory marker that can predict cardiovascular issues[*][*].

In a mouse study of atherosclerosis (inflammation and narrowing of the arteries) the addition of krill oil to mouse diets inhibited plaque development and reduced the incidence of atherosclerosis.[*] Another rodent study showed that krill oil reduced blood pressure[*].

The omega-3 fatty acids, antioxidants, and phospholipids in krill oil may enhance brain function and protect your brain and central nervous system from harm.

The phospholipids in krill oil have additional antioxidant and anti-inflammatory benefits[*].

Phospholipids like phosphatidylcholine can reduce damage from oxidative stress and may prevent depression, dementia, and other forms of mental and cognitive dysfunction[*].

In a double-blind, randomized controlled trial of 45 men aged 61-72, taking two grams of krill oil per day for twelve weeks improved their performance of mental calculations as well as working memory tasks[*].

A study of the effects of dietary krill oil in aging mice found that the supplement enhanced task performance, protected against oxidative damage, and helped prevent neurodegenerative disease[*].

Inflammation normally happens when your body releases chemical messengers and immune cells to aid in the healing process after an injury.

However, low-grade inflammation occurs when your body releases these same chemicals in response to inactivity, obesity, high levels of blood sugar, or stress.

Chronic inflammation is linked to arthritis, heart disease, dementia, and other health issues, but taking omega-3 fatty acid supplements like krill oil can reduce inflammation in your body.

In a study of 90 patients with heart disease or arthritis, taking krill oil reduced their inflammatory markers compared to placebo and also reduced their stiffness, impairment, and pain[*].

Studies of krill oil in mice have found that it can also lower an inflammatory maker called tumor necrosis factor alpha (TNFα)[*][*].

The effects of krill oil on preventing cancer cell growth are even comparable to doxorubicin, a conventional chemotherapy drug[*][*].

In addition to killing cancer cells, krill oil has also been shown to strengthen your immune system.

More studies would be helpful, but these effects may point to possible anticancer activity and improved immunity to certain diseases for people who take krill oil.

A healthy gut microbiome is also good for immune health, and krill oil may help with that, too.

Krill oil supplements may alter your gut microbiome for the better, reducing intestinal inflammation, improving wound healing, and restoring integrity to the lining of your gastrointestinal tract (GI tract).

A mouse study examined the effects of krill oil on the microbiome and other health markers. The mice in question were fed a high-fat, high-sugar diet designed to cause high triglycerides, high cholesterol, and obesity[*].

Mice that received krill oil along with their unhealthy food regimen had lower cholesterol, less weight gain, and altered gut flora compared to mice that didn’t[*].

In a double-blind, placebo-controlled study of 21 healthy participants, three grams of daily krill oil during an eight-week resistance training program increased lean muscle mass and strength levels in participants who received the supplement[*].

Multiple studies have found that omega-3 supplements containing EPA and DHA can decrease pain during women’s cycles and mitigate other premenstrual syndrome (PMS) symptoms,  including depression, fatigue, bloating, and lack of focus[*].

Omega-3 supplementation can even lead to participants reducing their use of pain relievers[*][*][*][*][*].

A double-blind, randomized control with 70 female participants found that krill oil decreased their stress levels, improved their depression, lowered their irritability, and decreased their use of drugs for pain relief[*].

According to a study involving 32,470 women, diets low in omega-3 fatty acids are more likely to cause dry eye disease, a painful condition that can result in poor vision[*].

How to Take Krill Oil

Taking krill oil supplements is a safe and effective way to increase your intake of the omega-3 fatty acids EPA and DHA.

The best time to take krill oil supplements is before meals. You can take your daily dose of krill oil in a single dose or two divided doses.

If you’re taking krill oil for wellness and disease prevention, try taking between one and three grams of krill oil per day.

According to one study, krill oil has anti-inflammatory benefits when taken at a relatively low dose of 300 milligrams per day[*].

If you’re taking krill oil supplements for anti-inflammatory benefits, you could start with a 300-milligram daily dose to gauge the effects, then consider adding more after several weeks.

Possible Side Effects and Risks

Side effects of taking krill oil supplements are rare and usually mild. In studies, the most common reported side effects were fishy breath, headache, diarrhea, bloating, stomach cramps, and constipation[*].

If you have an allergy to seafood, shellfish, or crustaceans, don’t use krill oil without speaking to a physician first.

People with bleeding disorders, or who are taking blood thinners like coumadin or other medications or supplements with blood-thinning or anticoagulant properties (e.g. aspirin or NSAIDs), should use krill oil cautiously and with medical supervision.

Both krill and fish oil can increase the effects of blood-thinning drugs. If you have surgery coming up, stop taking krill oil for at least two weeks before and after surgery.

There is a chance that krill oil supplements could lower your blood sugar or enhance the action of hypoglycemic drugs. If you have type 2 diabetes, or use drugs to manage your blood glucose, monitor your blood sugar carefully and speak to your doctor first if you want to take krill oil.

Women who are pregnant or breastfeeding should also seek professional medical advice before taking krill oil.

You Can Reap Krill Oil Benefits

Krill oil is also more stable at room temperature than fish oil thanks to its antioxidant content, and it also contains vitamins and phospholipids not found in fish oil.

Because the EPA and DHA in krill oil are attached to phospholipids, it’s also more bioavailable than fish oil. That means a lower dose of krill oil has equivalent effects to a higher dose of fish oil[*][*].

Omega-3 supplements like krill oil are an excellent idea if you don’t eat seafood often, or if you want to improve your omega-3 to omega-6 ratios for disease prevention and better health.