You know your hormones are important. But did you know that they act as chemical messengers between your brain and body to affect every major system?

This article is going to focus on the hormone leptin, a satiety hormone that plays an important role in fat stores, weight loss, energy intake, and weight gain.

This article will cover how leptin works, how your diet affects leptin production, and how you can increase your leptin sensitivity to burn more fat.

Leptin is your “stop eating” hormone — it tells your brain when you’re full and controls your appetite and energy expenditure, which can decrease fat stores and help you with weight loss.

When leptin is working properly — when your cells are leptin sensitive — leptin helps you stay lean and healthy[*]. But high levels of leptin from eating a poor diet — especially one high in sugar — can lead to leptin resistance.

When you’re leptin resistant, you start a vicious cycle of putting on fat mass, which is why obesity researchers are looking at leptin resistance as one of the main roadblocks in weight management[*].

How Does Leptin Work?

Leptin also affects the reward center of your brain. It controls dopamine in the nucleus accumbens, the part of your brain lights up in response to pleasure.

That means the more leptin there is, the less rewarding food becomes. Leptin shuts down your motivation to keep eating, which is why dessert stops being so appealing after you’ve already had a helping or two[*].

Finally, leptin boosts energy expenditure by increasing the rate at which you burn fat[*].

Basically, leptin keeps you satiated. It’s only half of the story, though. There’s another hormone, ghrelin, that completes the cycle of appetite.

Leptin shuts down hunger and makes you feel full. Ghrelin is the other half of the appetite cycle.

When your stomach is empty, it starts pumping ghrelin up to your hypothalamus, the same appetite-controlling part of your brain that leptin interacts with[*].

Ghrelin is the hunger hormone: it tells your brain it’s time to eat, so you start getting hungry and craving food. In fact, when researchers injected ghrelin into unwitting mice, these mice ate nearly twice as much food and gained more weight than control mice did[*].

There’s a natural balance between leptin (the fullness hormone) and ghrelin (the hunger hormone). They follow one another, taking you through cycles of hunger and fullness[*]. To keep your metabolism running well and lose fat, you want a good balance between these two hormones.

What is Leptin Resistance?

You may have heard that it takes 20 minutes for your brain to tell your body you’re full and that it’s smart to stop eating before you’re completely stuffed — especially if you’re trying to lose weight.

That’s a frustrating way to interact with food, and it’s actually a sign your metabolism is in poor shape.

If it takes you 20 minutes to realize that you’re full, odds are you have leptin resistance.

Leptin resistance is when your brain is so flooded with leptin all the time that it has become desensitized to the “fullness” signal the leptin sends. If you’re leptin resistant, you need a lot of leptin before your brain registers that you’re full.

That can lead to overeating, weight gain, obesity, metabolic disorders, and so on[*]. And the more you overeat (or eat the wrong things), the worse leptin resistance becomes, driving an unhealthy cycle that’s difficult to break.

What you want is leptin sensitivity — when your brain is primed to pick up on leptin immediately. With leptin sensitivity, the moment a small amount of leptin enters your hypothalamus, it activates the fullness signal, you feel satisfied with your meal, and you stop eating.

The good news is that you can change your leptin signaling and actively increase leptin sensitivity, repairing your metabolism and changing the way you experience hunger at a neurological level. Let’s talk about how.

Carbs — especially refined carbs like sugars — can shut down leptin receptors in your hypothalamus, so it takes longer for you to realize that you’re full[*]. Fructose seems to be worse than other carb types, which is a compelling reason to avoid high fructose corn syrup.

This is one of the reasons it’s so important to be aware of your carb intake or try a low-carb or ketogenic diet. Excess carbs can scramble your hunger signaling and drive you to overeat.

A high-fat, low-carb diet, on the other hand, will increase your leptin sensitivity and repair your metabolism, getting you more in tune with your hunger.

Leptin Sensitivity And The Ketogenic Diet

A low-carb, high-fat diet — also known as a ketogenic diet — appears to have positive effects on leptin sensitivity. Here’s how it works: 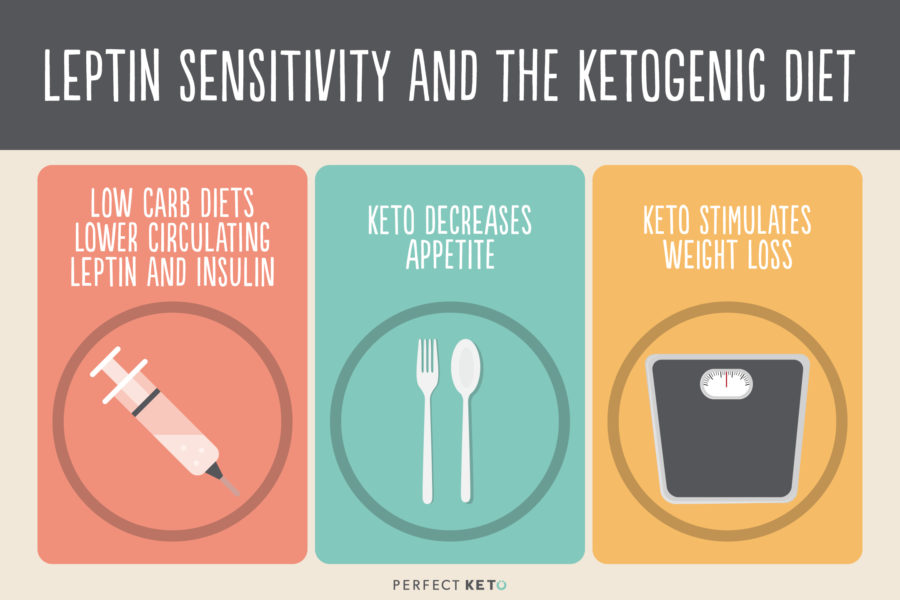 Researchers put 50 obese subjects on a keto diet for 10 weeks. After the program was over, the participants not only lost weight — they maintained long term reductions in circulating leptin and insulin levels at the 62-week mark post study[*].

In other words, a keto diet reversed leptin resistance and made people more sensitive to hunger. No more “20 minutes until you feel full,” which was likely one of the drivers of participants’ weight loss.

Keto aligns your hormones so that you feel satisfied with less food.

Keto makes weight loss much easier for a lot of people.

Many people lose weight easily on keto because they aren’t hungry, even when they’re in a mild calorie deficit. You can eat until you’re full without counting calories on keto, and you’ll still get leaner.

And even if you aren’t keto, there are other ways you can rewire your hormones to feel full with less food.

How To Increase Leptin Sensitivity

You can do several things to boost your leptin sensitivity and repair your metabolism. Here are a few of them: 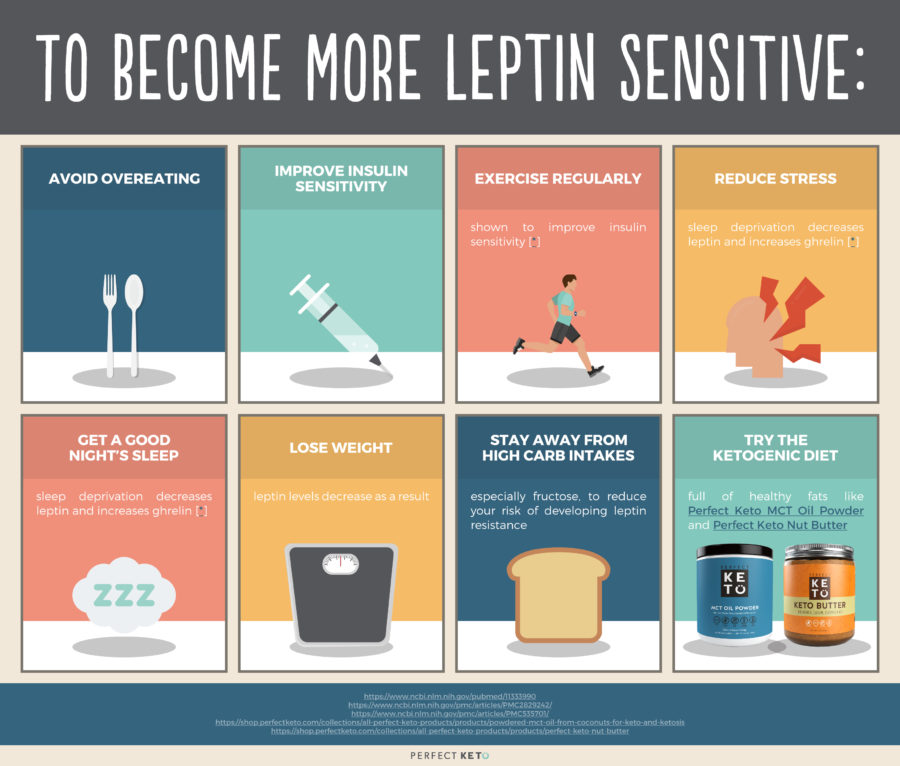 Boost Your Leptin Sensitivity to Control Hunger and Cravings

When it comes to regulating appetite, food intake, and energy balance, leptin is one of the most important hormones in your body. Leptin is what makes you feel satisfied after a meal. Leptin is also what tells your brain to stop storing fat and start burning it.

Use the tools in this article to increase your leptin sensitivity. You’ll lose weight more easily, overeat less, and keep your metabolism healthy.