It’s easy to confuse raspberry ketones with regular ketones. Even though it sounds like they are simply raspberry-flavored ketones, that’s a common misunderstanding.

What Are Raspberry Ketones?

In its true form, a raspberry ketone is found naturally in trace amounts in red raspberries and other fruits like blackberries, cranberries, and kiwis. It’s what gives berries their appealing scent and flavor.

Before being sold as supplements, raspberry ketones were mostly used within the food industry, sold in items like ice cream and soft drinks, and in perfumes and cosmetics.

How Do Raspberry Ketones Work?

The claim is that raspberry ketones help your body burn fat faster and more effectively because they supposedly increase levels of adiponectin — a hormone that regulates metabolism and blood sugar levels.

Adiponectin is linked to helping hair growth, breaking down fatty acids, and regulating glucose levels[*]. This inadvertently led to raspberry ketones being sold as a weight loss product.

Here’s the theory: Adiponectin typically increases when you lose weight[*]. Those with low levels of the hormone tend to have a higher risk of suffering from type 2 diabetes, obesity, heart disease, and fatty liver disease[*][*]. Supplementing with adiponectin would (theoretically) lead to reduced body weight and body fat.

Also, the molecular structure of raspberry ketones resembles molecules that are thought to boost metabolism: synephrine, a stimulant; and capsaicin, a component in chili pepper[*][*]. The claim here is that these ketones can also boost metabolism because of the similarities.

However, there are problems with these claims, which you’ll discover below.

The Difference Between Exogenous Ketones and Raspberry Ketones

People who take raspberry ketones for the same reason they take exogenous ketones: they support healthy energy levels and help mitigate keto flu symptoms when you’re getting into ketosis.

Taking ketone supplements may also help athletes — who may consume more carbohydrates for performance — get the full benefits of ketosis.

Raspberry ketones and exogenous ketones share these common goals. Therefore, there is quite a bit of confusion surrounding the two. Before you dive into the differences — both in definition and scientific research — it’s important to understand what exogenous ketones are.

What Are Exogenous Ketones?

There are three different types of ketones your body produces in the absence of carbohydrates: Acetoacetate, beta-hydroxybutyrate, and acetone. Beta-hydroxybutyrate (BHB) is the active form that can flow freely in the blood and that your tissues can use easily.

Lessen the Effects of a Carb Crash

If you eat a carb-filled meal, supplementing with exogenous ketones can help lessen the effects of a sugar crash. They give you a boost of ketones for energy and mental clarity, which helps when you go overboard with the carbs. And they work quickly. Most people feel the results of exogenous ketones within hours, if not less.

Getting Into Ketosis for the First Time

If you’re starting keto for the first time, you may experience what has been dubbed the keto flu. These are adverse side effects that range from nausea and difficulty concentrating to headaches and other flu-like symptoms. Supplementing with ketones typically lessens the impact of these symptoms.

Some athletes find it difficult to completely cut out carbs because of high-impact training. Therefore, athletes can supplement with exogenous ketones to get the full mental and energy benefits of ketosis while eating a higher percentage of daily carbs.

Exogenous ketones are not a weight loss supplement — they simply help give you the energy you need to burn more fat.

The Different Forms of Exogenous Ketones (That Work)

The following are common forms of exogenous ketones, all of which are more effective (as you’ll read later on) than raspberry ketones.

This is the raw ketone (typically BHB) that is not bound to another compound. Typically, your body can utilize ketone esters quickly, helping to raise ketone levels in the blood. Gastric distress can be a side effect.

A ketone body is typically bound to sodium, calcium, magnesium, or potassium. While it may not be as effective at raising ketone levels, it’s much easier on your digestive system.

Your body can use MCT (medium-chain triglyceride) oil, and other medium to smaller chain fats to help boost ketones. Your cells break down MCTs, indirectly creating ketone bodies. 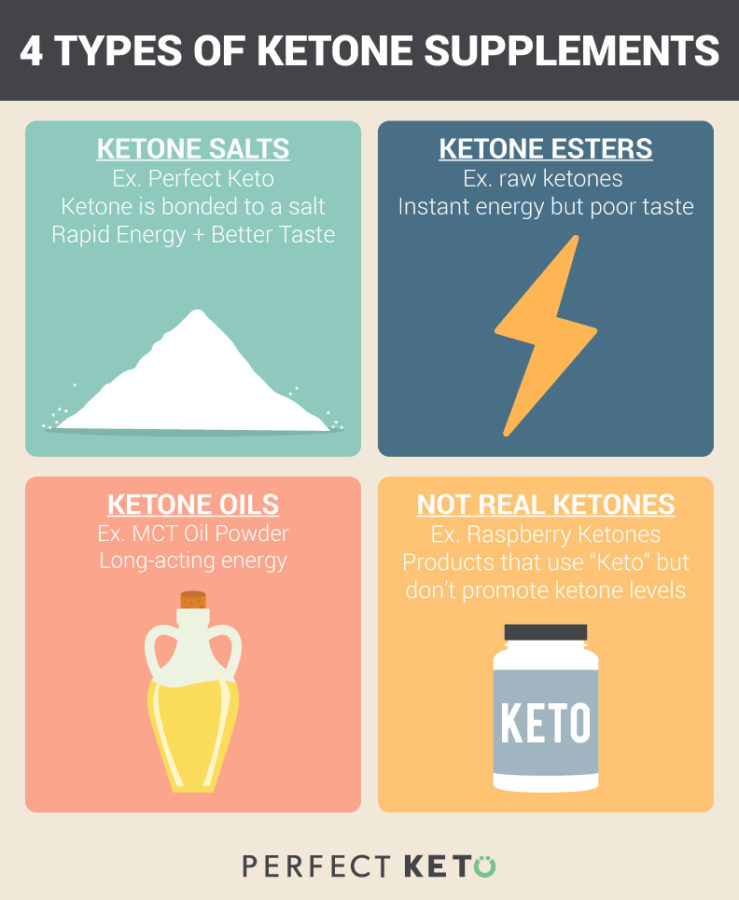 Why Beta-hydroxybutyrate (BHB) Is the Most Efficient Ketone

As stated earlier, beta-hydroxybutyrate (BHB, 3-hydroxybutyric acid or 3-hydroxybutanoic acid) is one of the three ketone bodies you produce. It’s also the most common found in blood, making up to 78% of total ketones in your blood[*].

Your body uses two forms of BHB: endogenous and exogenous. Endogenous is the type of BHB it makes on its own. Exogenous BHB is the kind you supplement with, typically in the form of salts or esters.

Endogenous BHB is derived from acetoacetate (AcAc) and is the main ketone used for energy. BHB is stable and found in greater supply within your body. But you can lose acetone through sweat and exercise.

Your body can use any of the three ketones for energy, but BHB is the most efficient. BHB has been shown to assist in the following:

It’s also a more efficient energy source than glucose. The physical and mental benefits of BHB are undeniable.

To get more BHB flowing through your blood, follow a strict ketogenic diet, experiment with intermittent fasting, and supplement with exogenous ketones and MCT oil. While your body produces endogenous BHB naturally, exogenous ketones boost your ketone levels faster.

Here’s the main issue with scientific research on raspberry ketones and human weight loss: There is none.

There are no human studies showing a ketogenic benefit from taking raspberry ketones.

Those selling these so-called weight loss supplements will cite a few studies with rats and mice to bulk up their credibility, but they aren’t as impressive as they’d have you believe. Here are some examples:

There are better, more natural ways to increase adiponectin in your body and reduce fat — following a low-carb diet, regularly exercising, and even drinking caffeine found in green tea and coffee.

Raspberry Ketones Have Nothing to Do With Promoting Ketone Levels

Because of the high cost of ingredients, most brands use fillers and artificial ingredients to keep the supplements affordable.

Long-Term Effects of These Ketones Is Unclear

Unlike exogenous ketones like BHB, which measurably increase your ketone levels,  you can’t be completely sure which raspberry ketones actually work.

The U.S. Food and Drug Administration recognized them as a “Generally Recognized as Safe” food additive. However, that occurred back in the 1960s — before people viewed them as a fat burning supplement.

Bottom Line: Raspberry Ketones Have Nothing to Do With Ketosis

Even though they might sound legitimate, raspberry ketones have nothing to do with getting you into ketosis or burning fat mass.

It’s easy to allow the product appeal to pull you in, but these ketones are completely different than those made by your body. Even if you weren’t trying to emulate ketosis and just wanted to use raspberry ketones to lose weight, you would be left with nothing more than a much lighter wallet and disappointing results.

If you’re looking for a quick boost to get into ketosis, use exogenous ketones. But do your research.

The best exogenous ketones are those which help raise BHB levels in the blood. BHB is the most abundant ketone, and more efficient than glucose for energy.

Best bet: Don’t waste your time or money on raspberry ketones. Put your energy into following a healthy, ketogenic diet for real results. Only spend your hard-earned dollar on quality ketone products (like Perfect Keto Base) that are more likely to further your health goals.