What Is Acetoacetate? What You Need to Know - Perfect Keto

When you’re following the ketogenic diet, your body switches into a state of ketosis. That means that your body will start to burn ketones from fat — rather than glucose from carbs — for energy.

Many people find it useful to measure ketone levels, whether from your blood, breath, or urine. But knowing more about each ketone type and what each does can help when it comes to ketone measurement and maintaining a state of ketosis.

There are three types of ketones, but this article is about one — acetoacetate (AcAc).

For most people, the primary energy source for the body is glucose. Glucose from carbohydrates is easily broken down, circulated through your bloodstream, and shuttled into your cells for energy in a process called glycolysis[*].

When you eat carbohydrates like bread, pasta, sugar, fruits, or starchy vegetables, your body breaks it down into glucose. It then uses that glucose for energy or stores it for later as glycogen. Glycogen is simply stored glucose and it hangs out mostly in your liver and muscles, waiting to get liberated for use.

Ketosis happens when you cut your carb intake — a lot — and replace those calories with dietary fat and protein. Then, your body makes a metabolic shift that breaks down fatty acids for fuel instead of glucose.

Once you’re in ketosis, you can use both fatty acids and ketones as fuel.

Once you’re in a state of ketosis, your body starts to make ketones via your liver. Ketones are molecules that your cells and brain happily use as fuel in the absence of glucose.

There are three primary ketones, or ketone bodies, that can be detected in your bloodstream during ketone body metabolism: 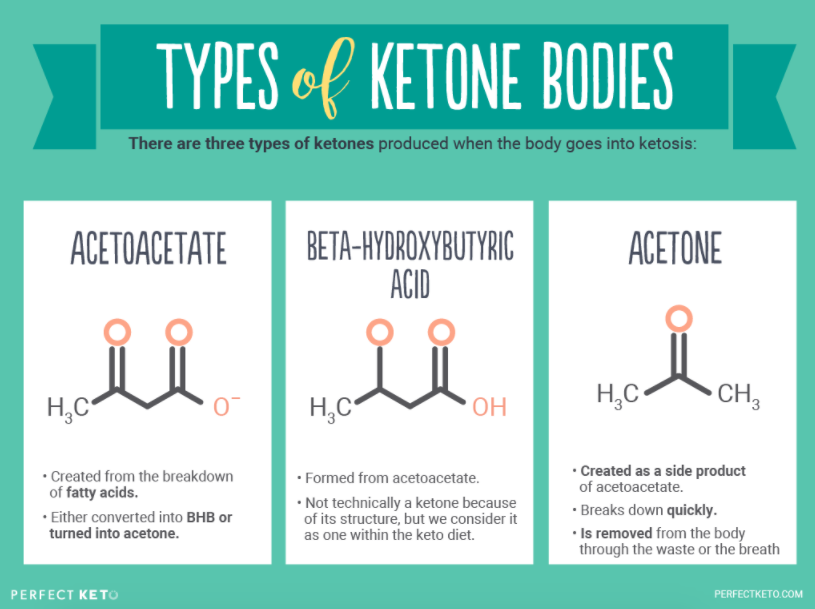 Your body creates AcAc first. Then, BHB is created from acetoacetate, and acetone is created incidentally as a byproduct.

Acetoacetate is converted into BHB, the rich source of energy for the brain[*]. This process of converting fatty acids to ketone bodies is essential because your brain is not able to efficiently use fatty acids for fuel. Ketones, however, can cross the blood-brain barrier and provide your brain with the energy it needs to function[*].

What Is Acetoacetate and What Does It Do?

Ketone bodies are produced in the liver during periods of starvation or when no carbohydrates (glucose) are readily available. To give you the science textbook definition, acetoacetate is a 3-oxo monocarboxylic acid anion that is the conjugate base of acetoacetic acid (also known as diacetic acid), a beta-keto acid derived from butanoic acid[*][*][*].

Like other ketone bodies, AcAc is produced from acetoacetyl-CoA within the liver’s cells during the process of ketogenesis, when carbs are so scarce that fatty acids are broken down for energy[*].

From there, ketones can supply your brain and body with fuel. Ketone bodies can make up to 70% of your brain’s energy and up to 50% of the energy used for fueling your body’s tissues.

Even though acetoacetate is made first during fatty acid synthesis, it’s made in relatively small quantities and is usually exhaled through the lungs[*]. What’s left can be used to form BHB. Both AcAc and BHB transport energy from your liver to other body tissues.

You already know that BHB is the most effective ketone body for energy. During the synthesis of AcAc and BHB, here’s what happens[*]:

Gluconeogenesis helps produce glucose in the body without using carbohydrates. Gluconeogenesis usually happens when protein is broken down into amino acids. These amino acids can be converted into pyruvate then glucose, which is why they’re called glucogenic.

However, a few amino acids — mainly leucine and lysine — can be converted into AcAc. Since AcAc is a ketone body, these amino acids are known as ketogenic[*].

To determine whether or not you’re in nutritional ketosis, it’s important to monitor the ketones present in your body. Thankfully, it’s fairly easy to detect acetoacetate.

When your body is in ketosis and ketone bodies are produced, excess ketones will “spill over” and excrete from your body in different ways. Acetoacetate is released through urine, so naturally, urine testing is the best method for measuring its levels. (BHB is found in blood, and acetone in the breath.) 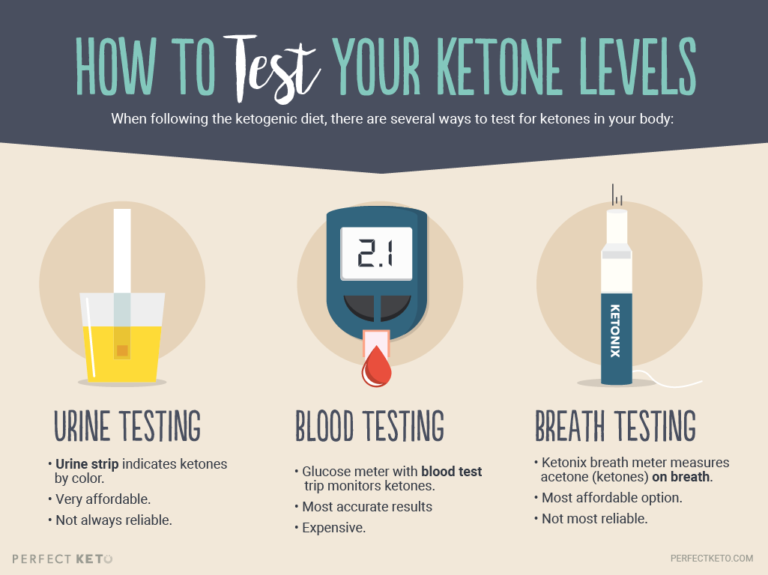 Urine testing can be done by peeing on a urine strip, which then changes color to indicate the ketone level. These tests are very affordable and can usually be purchased at your local pharmacy. There are certain companies that make urine strips specifically for testing ketones too.

However, keep in mind that sometimes urine strips aren’t a reliable method for measuring AcAc levels, especially if you’ve been in ketosis for a while.

This is because your body becomes more efficient at using acetoacetate and turning it into beta-hydroxybutyrate over time. Also, it’s impossible to account for the variable of hydration accurately. The more hydrated you are the more diluted your urine is.

As your kidneys adapt to the changes and become more efficient at reabsorbing acetoacetate, over time you might not see as much of these ketones spilling over into your urine — even though they are indeed working in your body.

There are many common misconceptions surrounding ketosis and hyperketonemia, or high ketone levels[*]. Many people believe ketosis is harmful because it’s confused with diabetic ketoacidosis.

Diabetic ketoacidosis (DKA) is a dangerous condition that can occur in those with type 1 diabetes who have a lack of insulin, either from not making enough or not injecting enough.

DKA can also occur in alcoholics if they’ve been binge-drinking for a prolonged period of time without consuming carbohydrates. In ketoacidosis, ketone blood levels might rise above 10-25 mmol/L, lowering the pH level of the blood. Those are much higher levels than the 5mmol/L maximum typically found on the keto diet. 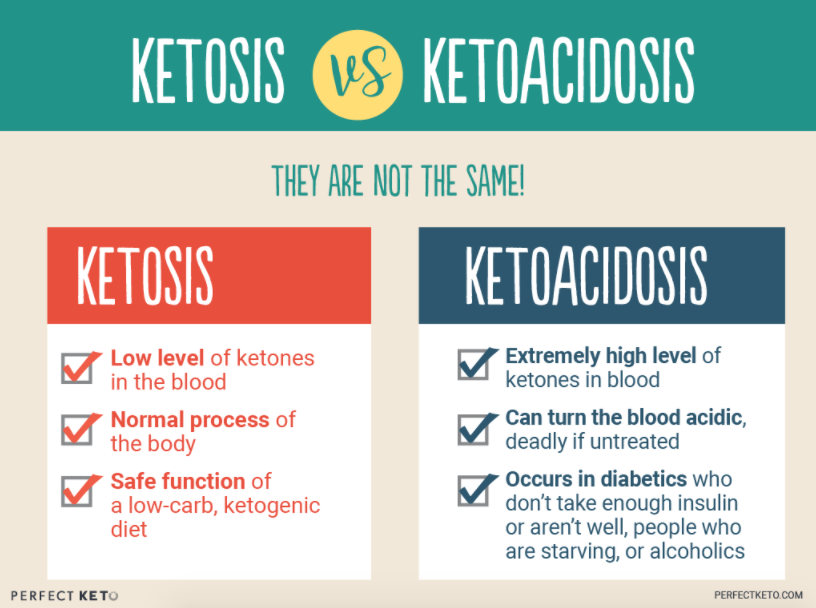 Remember that DKA is not the same as nutritional ketosis that comes from a ketogenic diet. Keto is a safe and healthy way to benefit overall health, lose excess weight, and burn fat while maintaining sustained energy and steady blood sugar levels.

The organic compound ethyl acetoacetate is a colorless liquid with a molecular weight of 130.143 g/mol, which may cause adverse health effects if inhaled. It is the ethyl ester of acetoacetic acid[*]. Unfortunately, many people confuse this with the AcAc ketone body.

Ethyl acetoacetate is found in coffee and fruit juices, and is commonly used as a flavoring agent. This organic acid can be used in the production of a variety of compounds, as well as dyes, inks, perfumes, and paint pigments[*].

On its safety data sheet (SDS), it is advised that you should not breathe in, ingest, or come into contact with ethyl acetoacetate.

Acetoacetate is the first ketone produced in the body during ketosis. It’s important because it’s the precursor to beta-hydroxybutyrate, which is a vital energy carrier when you’re in ketosis.

Acetoacetate is completely safe, but it is commonly confused with ethyl acetoacetate, which has various health warnings.

You can test your AcAc levels with urine strips. This is helpful when you’re just getting into ketosis, but testing blood ketone levels might be more accurate long-term.

One thought on “What Is Acetoacetate?”