Serrapeptase is a dietary supplement that comes from the gut bacteria of silkworms. It’s becoming popular as an anti-inflammatory and general pain reliever[*].

Serrapeptase may also help with asthma, carpal tunnel syndrome, blood clots, and ear, nose, and throat disorders. It even shows promise as a way to break down scar tissue[*][*].

You may be wondering if this is just another flash-in-the-pan nutritional supplement, or whether it’s right for you or not. Read on to learn how serrapeptase works and how it might help.

Serrapeptase — also known as serratiopeptidase or Serratia peptidase — is a proteolytic enzyme.

That means serrapeptase breaks down protein molecules into their amino acid building blocks. Serrapeptase is particularly good at dissolving dense, fibrous proteins, like those that make up scar tissue.

Serrapeptase is produced by two bacteria: Serratia sp. or Serratia marcescens. Serratia bacteria were originally found in the intestines of silkworms in the 1960s.

Scientists soon found that the serrapeptase generated by these bacteria allowed silkworm moths to dissolve their dense silk cocoons[*].

Though serrapeptase is a relatively new dietary supplement in the United States and Canada, it’s been used in Europe and Asia for several decades. The use of serrapeptase has shown promise in improving several health problems, from postoperative swelling to breast engorgement to bronchitis[*].

Nowadays, serrapeptase is becoming popular for its possible anti-inflammatory and pain-relieving properties, as well as for its ability to improve your immune system defenses[*].

How Does Serrapeptase Work?

Proteins are large, sprawling strands of hundreds (sometimes thousands) of amino acids, held together by chemical bonds. Serrapeptase comes in and splits those bonds, disintegrating proteins into smaller and smaller parcels, and eventually into single amino acids[*].

This is a good thing because the amino acids are the compounds that your body actually uses to rebuild tissues, create neurotransmitters, and produce hormones, amongst other functions[*].

Before moving on to potential serrapeptase dangers, find out why this supplement may be a good option for a variety of medical conditions, particularly when it comes to inflammation and pain relief. 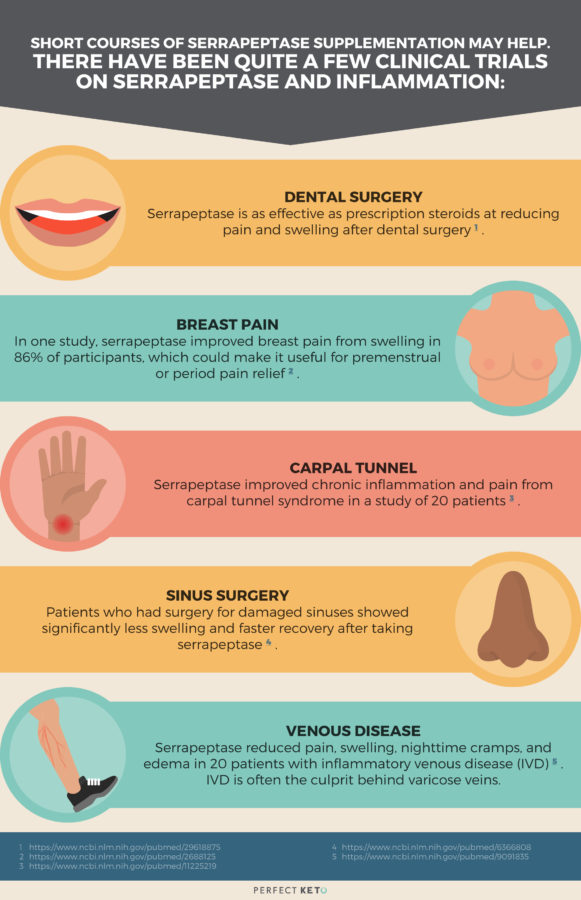 #1: It May Reduce Pain and Inflammation

Pain, swelling, and inflammation are all closely related. Your inflammatory response — if it’s working properly — generates pain and swelling in response to infection or injury, then starts to disappear as the problem goes away.

Swelling is a protective mechanism in which your body floods a damaged area of your body with immune cells. These immune cells help with wound healing.

Pain is protective too. It’s your body’s way of telling you that something is wrong. Without pain, you wouldn’t know when you’re injured.

But sometimes, pain and inflammation can get out of control. Serrapeptase supplementation may help.

There have been quite a few clinical trials on serrapeptase and inflammation:

Serrapeptase seems to be a strong alternative to over-the-counter painkillers, like ibuprofen, when it comes to relieving short-term pain, inflammation, and swelling.

That said, make sure you talk to a qualified healthcare professional for medical advice before using this enzyme after surgery or for a chronic illness. It’s important to learn all about potential serrapeptase dangers or side effects.

#2. It May Improve Respiratory Health

In one study, a group of Japanese researchers tested serrapeptase supplements (vs. placebo) in 29 patients with chronic airway disease.

In another double-blind study, people with chronic ear, nose, or throat disorders showed significantly more symptom relief than a placebo group after taking serrapeptase for a week. Serrapeptase reduced inflammation and cleared blocked passages of mucus and debris[*].

#3: It May Reduce Heart Disease Risk and Scar Tissue

Fibrin is a protein that helps clot your blood and forms scar tissue. You want the right amount of fibrin to heal wounds and prevent blood loss, but fibrin is also a major component of arterial plaques and can contribute to heart disease[*].

Fibrin is also a primary component of scar tissue. Serrapeptase has been shown to dissolve fibrin in rats and researchers suspect that it could break down and clear scar tissue in humans while keeping the living tissue intact[*][*].

Potential Serrapeptase Dangers and Side Effects

Serrapeptase has been popular in Asia and Europe for a long time, but it’s only in the last couple of decades that major research on serrapeptase has picked up[*].

Since it’s so new, there haven’t been good long-term safety studies. However, short-term human studies report rare and mild adverse reactions to serrapeptase, including[*]:

The major side effect to watch for here is a decrease in blood clotting. It can be a problem if you’re taking blood thinners, such as clopidogrel or warfarin, or nonsteroidal anti-inflammatory drugs (NSAIDs) like aspirin or acetaminophen.

Also be mindful if you combine serrapeptase with other natural supplements, like fish oil, which are mild-to-moderate blood thinners and can create problems.

If you have any health issues, always talk to your doctor beforehand to avoid any potential serrapeptase dangers.

How to Take Serrapeptase

Serrapeptase should be taken on an empty stomach — otherwise the enzymes will simply digest your food. That’s why most healthcare providers will suggest you opt for enteric-coated capsules, which will ensure the release of the enzymes is done in your intestine instead of in your stomach.

There are no published guidelines for dosage, but most clinical studies have used 10 to 60 mg of serrapeptase per day. This translates to 20,000 to 120,000 SPU (serratiopeptidase activity units) — the unit typically displayed on product labels[*].

You can get serrapeptase in pill form at most health food stores and online, and less commonly in liquid form.

It’s always a good idea to start with the lowest dose of any supplement and work your way up over a matter of weeks.

Do Serrapeptase Dangers Outweigh the Benefits?

Serrapeptase seems to be useful for managing pain, inflammation, and swelling, as well as for chronic breathing issues like asthma or bronchitis.

In theory, serrapeptase may help break up scar tissue and reduce the risk of heart attack, although there haven’t been human studies on it yet.

If you’re looking to manage inflammation or recover from an injury, it may be worthwhile to try serrapeptase. You can also use this complete guide to inflammation to learn how to get rid of inflammation and feel your best with diet and lifestyle changes.

If you’re looking for any more helpful healthy tips, consider checking out these articles: