You’ve probably heard a lot about coconut sugar and how it’s better for you than cane sugar or so-called healthy alternatives like agave syrup. But is coconut sugar keto, and is it truly good for you? What about other sugar substitutes?

Sugar lies at the root of many health problems, including heart disease, obesity, and the onset of diabetes. Unfortunately, sugar is getting increasingly harder to avoid, with hidden sugars in packaged foods, peanut butter, canned soups, and even marinara sauce.

For keto dieters with a sweet tooth, the idea of waving goodbye to all forms of sugar can seem daunting. Luckily, there are plenty of low-carb and low-calorie sweeteners that are better for you than sugar.

When you’re having those sugar cravings and looking for a sweet treat, you want something that won’t kick you out of ketosis or give you digestive issues. Many sweeteners claim to be healthy, but they come with troublesome side effects.

Here’s the ultimate guide to the best sugar substitutes you can use in your ketogenic diet. You’ll learn about the best keto sweeteners on the market as well as some sugar alternatives to avoid.

What Is Sugar and Why Isn’t It Low-Carb?

Sugars are a type of carbohydrate that provides your body with energy.

There are both man-made and natural sugars. Natural sugars are found in high-carb foods like fruit and starchy veggies, while others, such as granulated cane sugar, are extracted from foods to use during food processing, baking, and cooking.

Sugar from all sources will kick you out of ketosis because it spikes your blood sugar and makes your cells run on glucose.

If you’re looking for a low-carb sugar substitute, make sure there are no hidden carbs in the sweetener. Remember: sugar-free doesn’t always mean it won’t affect your insulin levels.

The Difference Between Sugars in Food and Sugars in Your Cupboard

The most common kinds of sugars are:

Sucrose is table sugar, made up of glucose and fructose. It can be extracted from sugar cane or sugar beet. Fructose and glucose are also in honey, fruits, and vegetables.

Lactose is commonly referred to as milk sugar due to its abundant presence in dairy products.

Maltose is the sugar found in beer and malted drinks[*].

The sugars you should be most concerned about are those in your kitchen cupboard. These include granulated sugar, caster sugar, icing sugar, and refined sugar.

One cup (or 200 grams) of sugar has a whopping 773 calories, including a shocking 200 grams of carbohydrates. Keep in mind this contains no fiber, which means these 200 grams are the total net carb count as well.

The good news is that there are plenty of low-carb sugar substitutes to choose from with fewer calories and carbohydrates. Some of the better options include stevia and monk fruit. 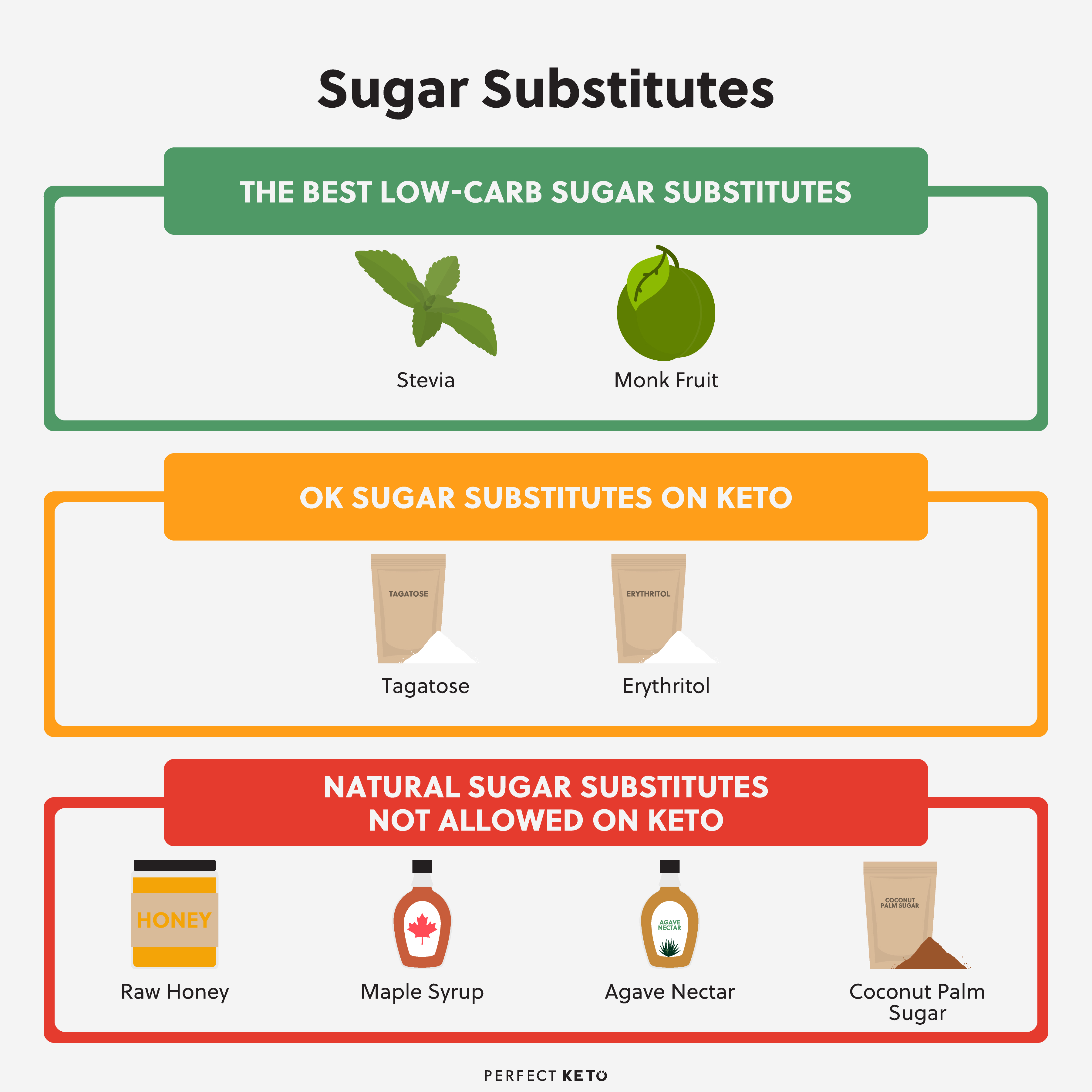 Stevia is one of the more popular sugar alternatives and for good reason.

While Americans may be more familiar with stevia coming in little packets, it’s an herb that belongs to the Asteraceae family.

Stevia comes in both liquid and powder forms. Some of the powdered forms may have added artificial sweeteners. Some brands may also sneak in dextrose (sugar) or maltodextrin, both of which are known to elevate blood sugar.

Dextrose is a sugar made from GMO corn. Maltodextrin is made from rice and may also contain MSG.

Stevia wasn’t always known as a sweetener. In 1931, it was discovered that when two glycosides — stevioside and rebaudioside — are combined, it gives stevia a perfectly sweet taste.

Randomized controlled trials have shown that, unlike sugar, stevia has minimal effects on blood glucose, insulin, blood pressure, and weight[*]. Plus, it contains zero calories and zero carbs.

Monk fruit (aka Lo Han or Luo Han) is a fruit native to China and Thailand, estimated to be 250 times sweeter than regular sugar. It has zero calories, zero net carbs, and it doesn’t spike your blood sugar.

The elements that give monk fruit its incredible sweetness are called mogrosides. Mogrosides are antioxidants that play an important role in fighting off free radicals and preventing inflammation[*].

It’s important to note that like stevia, monk fruit sweeteners may also contain dextrose and maltodextrin, so check your labels.

Other sugar substitutes aren’t quite as good as stevia or monk fruit, but they’re still better than blood-sugar-spiking sugar and honey.

Like other low-carb sugars, tagatose only has a small effect on blood sugar levels. Studies show tagatose helps increase HDL cholesterol levels (high-density lipoproteins)[*], which is beneficial for heart health.

Erythritol is a sugar alcohol, found naturally in watermelon, grapes, pears, mushrooms, and many fermented foods. Unfortunately, it’s becoming a common man-made product now that manufacturers are taking glucose and fermenting it with a yeast called Moniliella pollinis.

Note: Other sugar alcohols include sorbitol, lactitol, maltitol, mannitol, and aspartame (usually found in Equal). These are not keto-friendly since they are linked with a number of health risks.

There are plenty of supposed “healthy” sugar alternatives that are not permitted on the keto diet. This is primarily due to the total number of carbohydrates.

Although better for your health than regular table sugar, they still cause a blood sugar spike — which is what you’re trying to avoid on keto.

But raw honey is not permitted on keto because of its carb content. One tablespoon of raw honey contains 17 grams of net carbs — 16 of which come from sugar. It contains zero grams total fat, no dietary fiber, and only a tenth of a gram of protein[*].

Pure maple syrup is an unprocessed natural sweetener made by boiling sap from maple trees into a syrup. It’s filled with antioxidants (typically, the darker the syrup, the higher the antioxidant content)[*].

However, maple syrup is 99% carbohydrates, which isn’t exactly ideal for the keto diet. A single tablespoon contains 50 calories and 13.4 grams of carbs[*].

While this wouldn’t completely use up your carb allotment for the day, consuming maple syrup is not recommended as you could be getting those carbs from more nutritional food sources.

Fun fact: Agave comes from the same plant that produces tequila. While it’s marketed as a healthy alternative to sugar, it’s an incredibly processed product and should be avoided at all costs.

Agave contains compounds called fructans, which break down into fructose during processing. Although fructose ranks low on the glycemic index, it has been shown to cause weight gain and insulin resistance in the long term[*].

Coconut sugar comes from the sap of the flowers of the coconut palm tree. In appearance, it looks incredibly similar to brown sugar, but a little more grainy in texture. Like agave, it ranks low on the glycemic index, but with less fructose.

So, is coconut sugar keto? While it’s not overly processed, coconut palm sugar is simply too high in carbohydrates to be considered keto-friendly. It contains 15 calories per teaspoon and 4 grams of carbs —  all of which are from sugar[*].

Now that your question “Is coconut sugar keto?” has been answered, it’s time to learn about other sweeteners. These sugar alternatives should be avoided entirely, whether you’re following the keto diet or not, due to associated health risks.

Splenda, also known as sucralose, is the most widely used artificial sweetener in the U.S. Unfortunately, sucralose has been shown to cause inflammation and reduce the number of healthy bacteria in your gut[*].

Sweet’N Low is made with saccharin, a white powder that’s 200 times sweeter than sugar. Like other artificial sweeteners, saccharin is regulated by the FDA. The FDA has labeled saccharin as “generally recognized as safe,” although early studies showed an association between the sweetener and cancer.

Studies in the 1970s done with laboratory rats linked saccharin with bladder cancer. A similar link has yet to be found in humans[*].

Xylitol is another sugar alcohol found naturally in some fibers of certain fruits and vegetables. A low-digestible carbohydrate, xylitol is a derivative of xylose, which is a type of indigestible crystalline sugar. Unlike erythritol, xylitol can raise your blood glucose levels and is not keto-friendly.

Xylitol is a bit higher in carbohydrates than other low-carb sweeteners with about 10 calories and 4 grams of carbs per serving (or one teaspoon)[*]. One benefit: xylitol might improve oral health and prevent cavities[*].

High fructose corn syrup has been found to contribute to metabolic disorders and altered dopamine function[*].

Is Coconut Sugar Keto? No, But You Have Other Options

When it comes to sugar substitutes, opt for a low-calorie, low-carb alternative that’s free of adverse health effects.

Choose a sweetener that’s low on the glycemic index, natural, and minimally processed. Keep in mind that some natural sweeteners like raw honey, maple syrup, and coconut sugar are not permitted on keto since they are high in carbs.

There’s no shortage of recipes incorporating keto-friendly sweeteners. For different ideas on how to work these healthier sugar alternatives in your low-carb diet, click over and check out these keto desserts.

One thought on “Is Coconut Sugar Keto? The Best Sugar Substitutes on the Keto Diet”