You may know water chestnuts as the sweet, nutty additions to stir-fries, salads, and other popular Chinese dishes. With their light, crunchy texture and high water content, it’s tempting to think of water chestnuts as a keto-friendly food.

But not so fast.

What about their nutrition profile? Are they worth the carbs?

It turns out that there are some health benefits to water chestnuts, but you may want to get your nutrients elsewhere.

Learn the benefits of water chestnuts, their nutrient profile, and answer the question, “are water chestnuts a healthy addition to your keto diet?” (Spoiler alert: they are not.)

What Are Water Chestnuts?

These small tubers are crunchy and sweet, almost like an apple, and retain their crunch when cooked. This is mostly due to their high content of ferulic acid, a plant polyphenol that adds stability to the crosslinking of water chestnut molecules[*].

So, what are some of the health benefits of water chestnuts? That lies in their nutritional makeup.

Here are the nutrient facts for 100 grams (3.5 ounces) of water chestnuts, directly from the USDA database[*]: 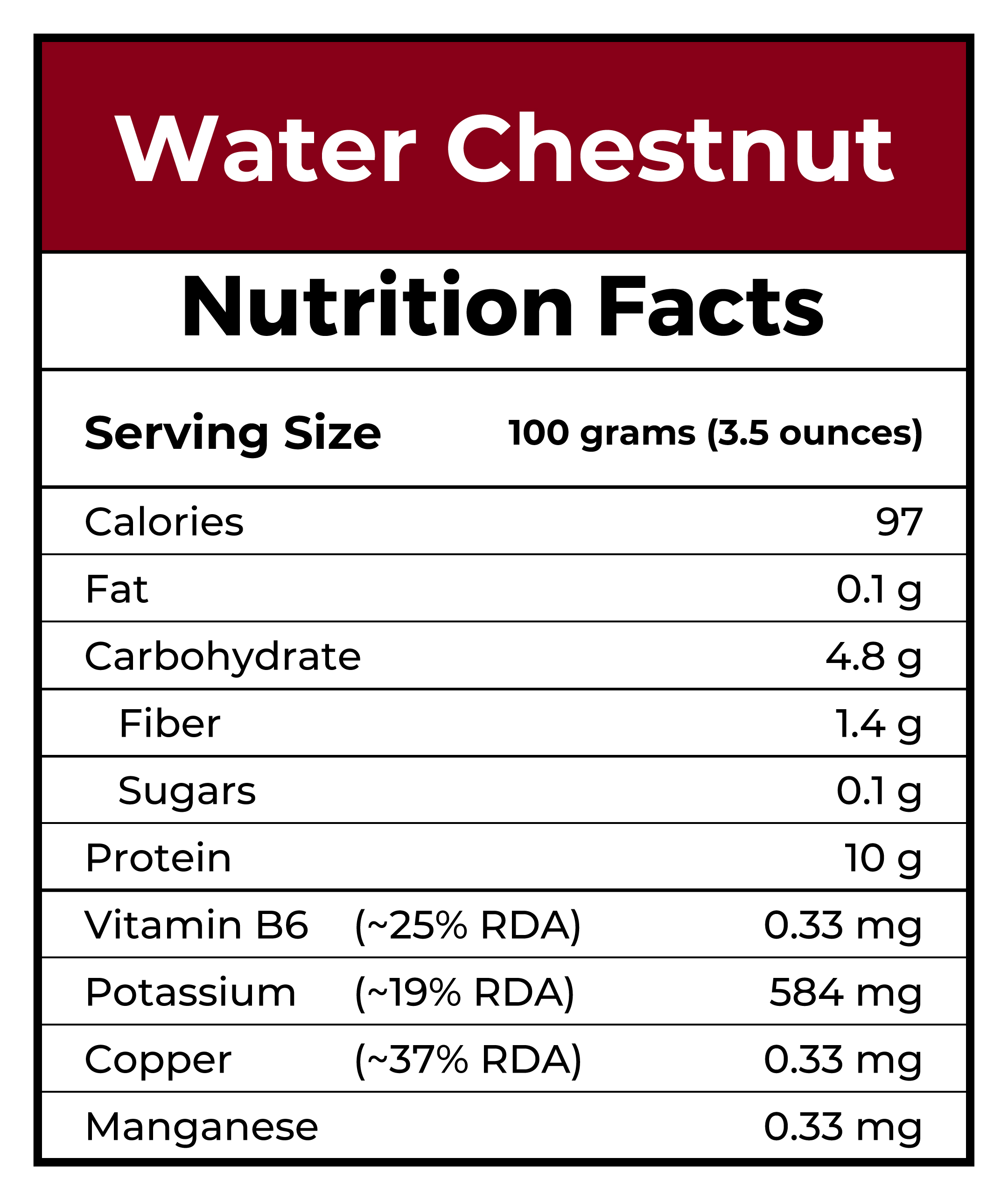 These are known as a very low-calorie food, due to their high water content. For just 97 calories, water chestnuts boast impressive levels of vitamin B6, potassium, copper, and manganese.

Fiber matters too, and each serving of water chestnuts contains 3 grams (12% of the RDA). Dietary fiber can, depending on the person, help with digestion, improve cardiovascular risk markers, and promote fullness[*][*].

However, these little tubers are packed with carbs. In fact, nearly all of the calories in water chestnuts from from starchy carbohydrates. This means water chestnuts will likely impact your blood sugar.

And keeping your blood sugar low is the most important part of a low-carb or ketogenic diet. High blood sugar, or hyperglycemia, has been linked to the progression of nearly every chronic condition from cancer to heart disease to Alzheimer’s[*][*][*].

The exact glycemic index of water chestnuts hasn’t been empirically measured, but consider the following:

So, while water chestnuts probably aren’t as high on the glycemic index as something like white rice, they’re still high in net carbs. And they probably aren’t low-glycemic either.

That means they’re likely to raise your blood sugar and may even kick you out of ketosis.

However, there are some health benefits to water chestnuts.

The benefits of water chestnuts come from antioxidants, nutrients, and — yes — even the water within this vegetable.

Learn about the nutrients in this crunchy vegetable and lower-carbohydrate swaps that will give you all the nutrients without the surplus of carbs.

Scientists have found a number antioxidant compounds in water chestnuts[*]. These include:

The first three antioxidants belong to a class of plant-based polyphenols known as catechins. The most famous catechin is EGCG (from green tea), but the catechins in water chestnuts may also improve health by:

Free radicals, also known as reactive oxygen species (ROS), are byproducts of normal human metabolism. That means, you can be living a perfectly healthy lifestyle and you’ll still experience some free radical damage.

ROS are actually valuable signaling molecules, but excess ROS cause damage and are linked to the development of chronic disease[*]. But that’s where antioxidants come in. Antioxidants like catechins can help battle ROS, reducing oxidative stress.

Catchenins have also been shown to prevent lipid peroxidation[*]. Ever smelled rotten fish? You were smelling oxidized lipids — the smelly byproducts of oxygen reacting with polyunsaturated fish fat.

Finally, the ferulic acid in water chestnuts may have anticancer properties, but this has only been shown in vitro (test tubes)[*].

Want the catechins and other antioxidant compound in water chestnuts without the carbs? Drink green tea — rich in the highly-researched catechin, EGCG[*].

#2: Water Chestnuts Are High In Potassium

Water chestnuts, then, contain about 20% of your daily need for potassium.

Potassium is best known for regulating blood pressure, partly due to its balancing effect on sodium. Adequate potassium status is also important for[*]:

Since potassium is found in large amounts in fruits (like banana and orange) and starchy vegetables (like sweet potato and butternut squash), you have to take special care to get adequate potassium from food if you’re on a low-carb diet.

Water chestnuts contain about 20% of the RDA for potassium — an important electrolyte mineral for your heart, nerves, and muscles — but there are plenty of keto-friendly foods that can also fulfill your daily requirement.

Some keto-friendly potassium-rich foods include:

#3: Water Chestnuts Are a Good Source of Fiber

The RDA for dietary fiber is 25 grams[*]. One serving of water chestnuts, with 3 grams dietary fiber, gets you 12% of the way there.

#4: Water Chestnuts Are High In Vitamin B6

Animal foods are the best sources of B6, and diets low in these sources may predispose someone to B6 deficiency.

A serving of water chestnuts contains 25% of your daily vitamin B6 requirement, but a keto-diet rich in animal foods should be more than sufficient to meet those needs.

#5: Water Chestnuts Are High in Copper

One serving of water chestnuts contains 37% of the RDA for copper. Copper is an essential mineral for collagen synthesis, immune function, and iron absorption[*].

Despite its dietary importance, copper intake is generally low in the modern diet. Why? People don’t eat enough liver, shellfish, and mushrooms — the best dietary sources of copper.

Water chestnuts are a good source of copper (an important antioxidant mineral), but low-carb folks can focus on other copper-rich foods like beef liver, shellfish, and mushrooms.

#6: Water Chestnuts Are High In Manganese

One serving of water chestnuts contains 0.33 milligrams of manganese[*].

You need manganese to form bone, to metabolize carbs, and to metabolize amino acids. Many enzymes in your body are dependent on manganese. One called arginase helps you form urea for urinary excretion, while another called glutamine synthetase helps you turn otherwise toxic ammonia into the beneficial amino acid, glutamine[*].

Manganese deficiency can lead to a form of dermatitis called Miliaria crystallina — a rash of small, clear blisters. Low intake is also associated with low bone density, low cholesterol, and slower growth of hair and nails.

Plant foods are the richest source of manganese. Pure carnivores may want to consider supplementation. But you don’t have to revert to water chestnuts.

Water chestnuts are high in manganese, which serves as a cofactor for countless enzymes in your body. Keto folks can get their daily values of manganese by eating plenty of non-starchy vegetables like spinach, collard greens, and kale; and nuts like almonds and pecans.

In one study, researchers gave 24 lean women three different pre-meal “snacks”: a casserole, a casserole with a glass of water, and a bowl of chicken soup[*]. Each snack was equal in calories, and the soup had the same ingredients (including water) as the casserole-water combo.

Results? The women fed the liquid-rich soup, but not the other two snacks, ate significantly less in the meal that followed — and they didn’t make up for it later, at dinner.

The interesting group was the glass-of-water group. They still ate more, despite having the same amount of liquid as the soup group.

Another way to curb appetite without eating watery, low-calorie foods? The ketogenic diet. Keto, in fact, has been shown to reduce circulating levels of ghrelin, your hunger hormone, which reduces cravings[*].

How Do You Even Eat Water Chestnuts?

If you want to eat properly-prepared water chestnuts, simply visit a Chinese restaurant. The Chinese have used water chestnuts in their cuisine for centuries, and the practice is still going strong today.

In Chinese cuisine, and many other international cuisines, water chestnuts can be eaten raw, steamed, sauteed, boiled, pickled, or grilled. Water chestnuts can also be ground up and used as a flour substitute.

To consume them raw, simply wash, peel, and chomp away. Water chestnuts have a crispy, apple-like flesh. Like apples, they taste fairly sweet. (Water chestnuts do contain several grams of sugar per serving, after all!).

To add texture to your dinner, you can also toss water chestnuts into a stir fry. Don’t worry, they won’t lose their crunch.

The Takeaway: Are Water Chestnuts Keto?

If you’ve read up to here, the next sentence will be no surprise. Water chestnuts are definitely not a part of a healthy keto meal plan.

Eating a low-carb ketogenic diet means, in many cases, eating less than 20 grams carbs per day. There are 24 grams of carbs in one serving size of water chestnuts.

But if you’re restricting your carb intake on keto, you’ll want to get these benefits elsewhere in your diet. Luckily, many keto-friendly foods fit the bill. Happy eating.

2 thoughts on “Are Water Chestnuts Keto?”