A healthy keto diet includes plenty of low-carb, colorful vegetables. But which veggies are best?

Asparagus is an extremely versatile vegetable that you’ve most likely come across in all types of cuisine from Chinese food, to Indian, to the American grill.

It’s got that perfect blend of crunchy and soft, and its dark green color can add a colorful pop to any dish.

But is asparagus keto-friendly? And just how much asparagus can you have per meal to stay in ketosis?

Let’s take a look at some of the health benefits of asparagus and determine whether or not this should be a staple in your keto meal plan.

Asparagus is known as a perennial plant, which means that it lives for more than two years. When you come across asparagus in the grocery store, you’re seeing the shoots or stalks.

Asparagus is a flowering plant, and you’ll notice that the tip of the stalk is actually a bud. These buds are responsible for absorbing sunlight and storing carbohydrates that the stalk can use for growth.

As far back as 5000 years ago, both ancient Chinese and Indian medicine used asparagus therapeutically for things like depression, diarrhea, and cancer[*].

As a native plant to Africa, Asia, and Europe, asparagus has found its way into agriculture around the world. Today you can find asparagus growing in North America, South America, New Zealand, and Australia.

In fact, you’ve probably experienced one of these compounds first hand … have you ever had interesting-smelling pee after eating asparagus? 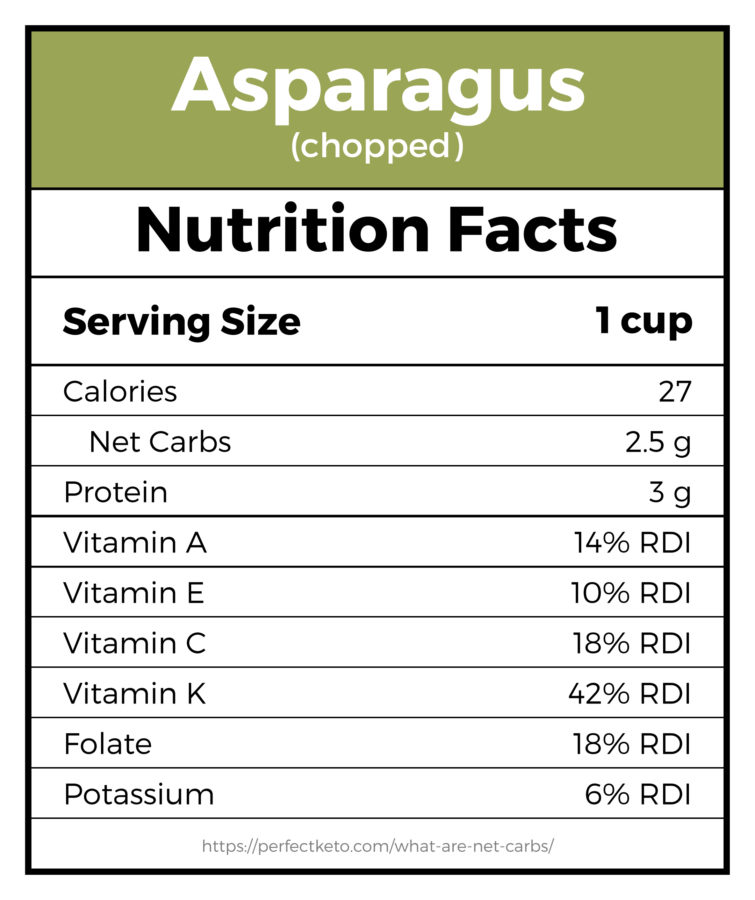 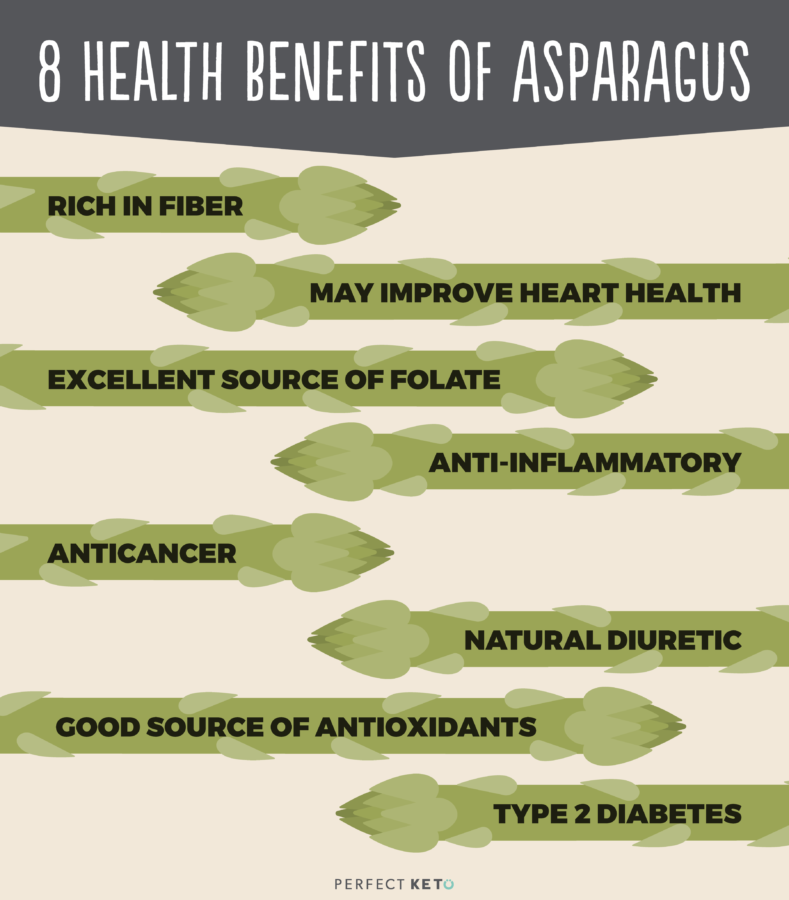 One cup of asparagus contains 2.8 grams of fiber, which is about 10% of your daily recommended fiber intake[*].

Fiber is essential for healthy digestion. It acts like a brush, cleaning out your colon as it moves through your digestive tract and removing unwanted bacteria and build up.

Fiber isn’t just great for your digestive tract, it also increases the size and weight of your stool; which is what allows it to move through your system faster[*]. That means less constipation and happier gut bugs.

Getting adequate, veggie-based fiber is good for a number of gut diseases and disorders, from hemorrhoids to colon cancer[*][*][*].

The path to more fiber on a keto diet? More low-carb vegetables. Without high-carb, high-fiber grains on the menu, vegetables like asparagus will be a go-to for you on a keto diet.

Stress, diet, and the natural aging process are all factors that can contribute to high blood pressure. As your body gets older your arteries stiffen a bit more, this can cause an increase in blood pressure naturally. But there are things you can do keep your blood pressure within a healthy range, and diet is a huge factor[*].

Asparagus has been studied for its potential role in heart health lowering blood pressure. When a group of 28 volunteers ingested an asparagus extract there was a significant reduction in blood pressure across the volunteers[*]. One of the bioactive compounds in asparagus, called rutin, is thought to be responsible for this effect.

Folate is a water-soluble B vitamin that performs a large number of important roles in your body.

For pregnant women, folate becomes twice as crucial due to its essential role in the growth and development of babies in utero. Folate not only assists in making DNA and dividing cells for the growth of the baby, but it prevents neural tube defects. Neural tube defects can affect the babies spine or brain. For this reason, pregnant women are always advised to supplement with extra folate. This is of course in addition to eating a diet that is rich in this B vitamin[*].

Asparagus is not only a great source of folate, but its bioavailability is 60-90%. That means that 60-90% of the folate you consume when you eat asparagus is absorbed and able to be used by the cells in your body[*].

Research has shown that if you eat a diet rich in folate, it may decrease your chances of developing breast or pancreatic cancer[*].

Folates role in brain function continues to be studied. While it is undoubtedly essential for the development of your brain and spinal cord, it looks like there could be some other significant benefits for keeping your body flush with folate.

Studies have found a correlation between folate deficiency and depression. Once people with folate deficiency start taking folate, they notice less depressive symptoms, and for those on medications, the medication works more effectively[*]. In addition, there is reason to believe that folic acid may play a role in Autism Spectrum Disorder, but more research needs to be done[*].

If you think your life is tough, try being a mouse. Scientists wanted to tests asparagus’ potential anti-inflammatory effects, so they initiated edema (swelling) in the ears of a group of mice. Luckily for the mice, the asparagus extract calmed the inflammation, reducing the skin thickness and inflammatory chemical production. And don’t worry — the skin on the mice’s ears also returned to normal[*].

One study found that shatavarins were able to reduce inflammation caused by gram negative bacteria. The compounds also inhibited the production of inflammatory chemicals. Researchers suggest that they work with your own immune system to enhance its activity and fight off unwanted inflammation[*].

You’ve probably noticed an increase in natural medicine being used to treat and prevent some of the most prevalent diseases of our times. Scientists are looking to the natural world to create new medicines and potent drugs that can contribute to the healing of modern disease.

Vegetables are no exception, and in the case of asparagus, some exciting compounds have been isolated.

For example, the shatavarins that have been studied for their anti-inflammatory effect also have an anti-cancer effect in vitro as well as in animal models[*].

When tumor-bearing mice were fed shatavari from asparagus the tumors shrunk, and the viable cell count of the tumors also diminished significantly. In addition, their blood tests improved significantly when compared with untreated mice.

The researchers then took the lab and tested the shatavarins on human cancer cells. In vitro tests were done on breast, kidney, and colon cancer cells showing improvement in all three strains[*].

If you’re not impressed yet, here’s one more for you — a phytonutrient called nyasol was isolated from asparagus to test its potential anticancer activity. When studied in vitro nyasol was shown to have an inhibitory effect on both ovarian and live cancer cells[*]. The scientist called the result remarkable. How about that?

Asparagus is high in the non-essential amino acid asparagine[*]. Notice the name similarity there? Asparagine acts as a natural diuretic, which makes eating asparagus a natural way to release some excess water from your body[*],[*].

Diuretic medicines are commonly used to treat edema and high blood pressure. Eating foods that are natural diuretics is a much gentler way to make sure that everything is moving through your body and out of your kidneys properly[*].

Antioxidants are an essential part of the maintenance of your body. You create oxidative stress in your body every day, without any conscious effort. Breathing, eating, exercising, even some of the healthiest things you do for yourself create some amount of oxidation.

Many plant foods contain antioxidants, but asparagus happens to be rich in one of the most potent antioxidants — glutathione.

Glutathione (GSH) is more than just an antioxidant, its activity in your body includes DNA synthesis and repair, protein synthesis, amino acid transport, it gets rid of toxins, helps your immune system function and actives enzymes. And that’s not an exhaustive list[*].

It may even protect you against neurological disease by protecting your cells from both reactive oxygen species and reactive nitrogen species[*].

Rutin, a flavonoid found in asparagus, is another compound with antioxidant activities. Rutin plays an essential role in something called the Maillard reaction. The Maillard reaction is the browning you see when you pan-fry a piece of chicken or veggies. This browning creates flavor and a nice caramelization. This browning comes from the reaction of amino acids and sugar molecules[*].

This same reaction that you see on your pan-fried food also happens in your body. In this case, something called advanced glycation endproducts (AGEs) are formed. This internal “browning” process can cause a lot of oxidative damage due to an increase in free radicals. Here is where rutin comes in — as an antioxidant rutin has been shown to enhance free radical scavenging, protecting your cells from oxidative damage seen in Maillard reactions[*].

In addition to these two powerhouse antioxidants, asparagus is an excellent source of both vitamin E and C, which have their own antioxidant activities in your body.

While eating a high fiber diet that’s rich in low carb vegetables is excellent for diabetes — asparagus has even more to bring to the table concerning this specific metabolic disorder.

Asparagus extract taken at the same time as sugar was found to not only inhibit carbohydrate digestion, but also enhance the secretion of insulin in diabetic rats. After consumption, the rats blood sugar levels were significantly suppressed and there was an increase in pancreatic insulin release as well as plasma insulin levels[*].

The exact mechanism is still unknown, but it appears that compounds in asparagus can enhance the production and release of insulin from the pancreas. This may be done by directly impacting the beta cells, which are responsible for the secretion insulin[*].

Asparagus was also shown to improve a common complication of diabetes, called diabetic neuropathy in rats[*].

Eating a healthy amount of low-carb vegetables when you’re following a keto diet is extremely important. It’s easy to fill up on delicious low-carb foods like grass-fed beef, macadamia nuts, keto crackers, and nut butter — but you have to leave room for your veggies.

With its anti-inflammatory, anti-oxidant, anti-cancer, and blood pressure lowering benefits, in addition to its rich nutrient content, asparagus should be a staple in your keto diet.

You can easily include asparagus in your meal by:

Some other low-carb veggies to include in your keto diet are: 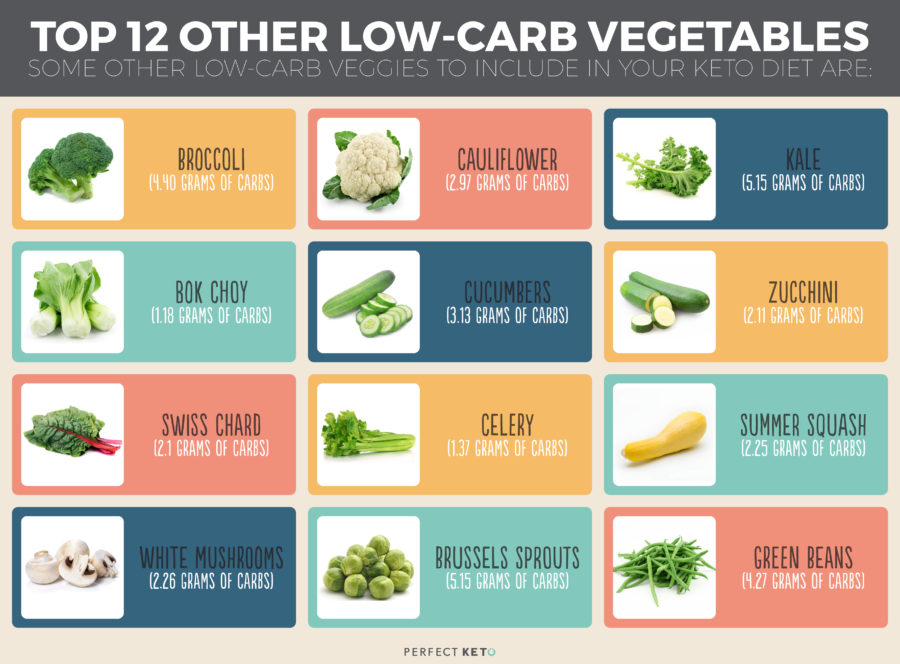 For a more extensive list of low-carb veggies check out The Best Low Carb Vegetables to Eat On a Keto Diet.

If it isn’t clear by now, asparagus is a powerhouse food and should absolutely be a part of your healthy ketogenic diet. With tons of fiber and nutrients, asparagus is one vegetable that you definitely don’t need to shy away from.