Is Stevia Keto? What The Science Says - Perfect Keto

You’re probably aware that going on a keto diet means cutting out sugar. But you might be wondering if natural sweeteners can be included in a ketogenic diet meal plan. And since stevia is such a popular sugar alternative, you’re probably asking, “Is stevia keto?”

Certain natural sweeteners like maple syrup, agave, coconut sugar, or honey can spike your blood sugar levels and kick you out of ketosis. Fortunately, there are natural, plant-based sweeteners available to sweeten your coffee, tea, or keto recipes and satisfy your sugar cravings. What’s more, stevia may be the healthiest.

In this article, you’ll learn how stevia works, if stevia is keto-friendly, and how stevia extract compares to other sugar substitutes on the market.

Hundreds of years ago, the natives of South America discovered a leafy shrub in the jungle, with leaves that had an incredibly sweet taste[*].

Decades later, in 1905, this shrub was classified as Stevia rebaudiana. The extract from this plant’s sweet leaf would, in time, become known as stevia.

Today, people all over the world use stevia as a zero-calorie sweetener — and the U.S. Food and Drug Administration (FDA) has classified high-purity stevia extracts as safe to consume[*].

Pure stevia extract contains high levels of steviol glycosides — compounds responsible for both the sweetness and health benefits of stevia. Because of these steviol glycosides, stevia is 200-300 times sweeter than the equivalent dose of table sugar[*].

How Does Stevia Work?

A small amount of stevioside or rebaudioside A goes a long way. Despite having no calories, pound for pound they’re much sweeter than natural sugar.

One common concern with non-caloric sweeteners — stevia included — is that they can trick your body into a glycemic response, causing a spike in blood sugar. However, this isn’t the case with stevia.

You may also be wondering if the intense sweetness of steviol glycosides might kick you out of ketosis. There’s no direct research to answer this question, but there’s science showing that[*]:

Since ketosis is governed by blood sugar and insulin, it follows that these metabolic improvements would likely enhance, not prevent, the production of ketones.

The benefits of stevia, however, go well beyond the maintenance of ketosis.

Stevia is more than just a zero-calorie sweetener. By all indications, stevia extract has some medicinal properties too.

These properties derive from the glycosides. One such glycoside called stevioside, is highly-researched for its antidiabetic, hypoglycemic (blood sugar lowering), and antioxidant properties[*]. Here are some of the top health benefits of stevia. 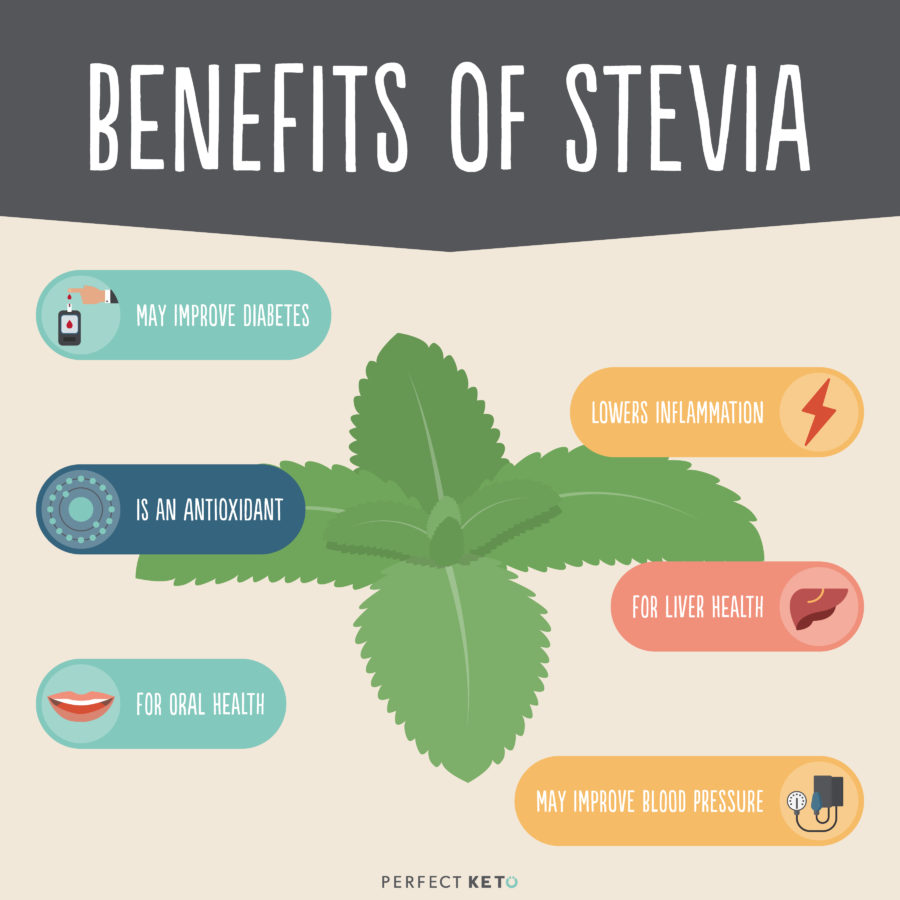 Type 2 diabetes is a metabolic disorder that involves high blood sugar, high insulin, high blood pressure, and obesity. This condition is rising at an alarming rate in America, and high-sugar diets are partially responsible for this problem[*].

Stevia has a long history of treating diabetes in the natives of Paraguay and Brazil, helping to lower blood sugar and insulin levels[*].

Stevia mediates insulin-secretion in an intelligent way. When blood sugar gets too high, stevioside commands beta cells in the pancreas to release insulin. Then insulin gets blood sugar out of your blood and into your cells.

But when blood sugar is low, stevioside does not have this insulin-stimulating effect. This safety mechanism prevents dangerously low blood sugar, known as hypoglycemia[*].

As you go through life, your body generates compounds called reactive oxygen species (ROS) as a normal byproduct of metabolism.

At low levels, ROS are necessary signaling molecules. Too many ROS, however, increase disease risk and accelerate aging[*].

Fortunately, your body makes internal antioxidants like glutathione to mitigate the damage of too many ROS. But often you need extra ROS support, and that’s where stevia may help.

Some researchers believe that these phenols are responsible for the antidiabetic effects of stevia mentioned earlier[*].

In one randomized controlled trial, Chinese adults suffering from high blood pressure were given 500 milligrams of stevioside powder three times a day for two years.

At the end of the trial, the stevioside group had significantly lower blood pressure compared to a placebo group[*].

Consuming stevia isn’t the only way to benefit from this medicinal plant. You can also use it for your oral hygiene.

In one six-month trial, a group of Indian schoolchildren used a daily mouthwash made with stevia. Results found this concoction significantly lowered plaque and gingivitis[*].

Diabetes often causes ROS-driven oxidative damage in the liver. This peroxidation of organ tissue can lead to liver dysfunction and represents a common, yet serious, diabetic complication[*].

In one 2013 study, stevia-fed rats showed a 30% decrease in liver peroxidation compared to control groups[*].

As mentioned earlier, stevia extract is generally recognized as safe by the FDA.

In fact, stevia has been thoroughly studied in both humans and animal models. Reviewing over 200 of these studies, the Joint FAO/WHO Expert Committee set an Acceptable Daily Intake (ADI) for high-purity stevia extract at 4 milligrams per kilogram body weight[*].

In other words, stevia is non-toxic and safe for human consumption, even at relatively high doses. Many health experts agree that this natural sweetener is safer than aspartame, saccharin, and sucralose[*].

Side Effects of Stevia

There are some potential side effects of stevia worth noting. Some people report mild GI distress when consuming stevia.

To minimize the chance of this side effect, and to maximize the benefits of stevia consumption, make sure you consume high-purity steviol glycoside extract.

The truth is, many products come with added sugar alcohols like maltodextrin or dextrose — compounds that negate stevia’s benefits and can carry undesirable side effects.

The ketogenic diet is a low-carb, high-fat diet that can shift your metabolism into a fat-burning state called ketosis. In ketosis, your cells use less glucose and burn more fat, which is ideal for weight loss.

The goal of the keto diet is to simultaneously promote both these states.

Along with low-carb living, stevia also helps to keep blood sugar and insulin low. This has been shown in multiple studies, and that’s why stevia can be a promising antidiabetic agent[*].

The Best Form of Stevia

When choosing a stevia product, look for high-purity stevia extract standardized to at least 95% glycosides. That’s the level of purity approved by the FDA[*].

Other forms of stevia — such as crude stevia extracts and stevia leaves — should be approached with caution, as they aren’t subject to regulatory scrutiny.

Stevia vs. Other Low-Carb Sweeteners

When it comes to artificial sweeteners like aspartame and sucralose, consider the following:

Stevia is a safer and healthier option than artificial sweeteners.

Sugar alcohols have become a popular low-carb sweetener. While most of them are OK in small amounts, there are some side effects to be aware of.

For example, sugar alcohols — also known as polyols — are not absorbed in the gut and can often cause gas, bloating, and other digestive issues[*][*].

This problem is most apparent with xylitol, sorbitol, and maltitol — though erythritol (the main compound in Swerve) may cause problems as well.

Sugar alcohols may also leave a bitter aftertaste, while stevia has a milder and sweeter flavor.

Therefore, while sugar alcohols may be a healthier choice than artificial sweeteners, they can carry more side effects (and fewer benefits) than stevia.

Monk fruit extract is similar to stevia. Used for hundreds of years in China, here are some nutrition facts about this keto sweetener:

The Bottom Line: Stevia Is Keto-Friendly

Is stevia keto? Yes, it is.

Just like natural sugar, stevia is extracted from a plant. Unlike sugar, however, stevia can help lower blood sugar levels, improve insulin function, and may clean up ROS. Also, Stevia can be found in Perfect Keto’s Bars and Perfect Keto’s Cookies.

For these reasons, stevia is a valuable tool in your keto toolbox, as it’s likely to promote a ketogenic, fat-burning state, and has zero calories and zero net carbs.

Stevia sweetener is inexpensive, safe, and widely available. Best of all, it satisfies your sweet tooth without you having to worry about carb count or being afraid of derailing your low-carb diet.

For more information about sugar alcohols and other keto-friendly sweeteners, consider checking out these articles:

One thought on “Is Stevia Keto? What The Science Says”