You may have heard of dreaded keto insomnia, which is a common phase people go through as they’re transitioning from a higher-carb diet to a low-carb keto diet. But what about your sleep quality once you’re keto-adapted?

Is your sleep deeper and more restful when you’re running off ketones, as opposed to glucose?

While you might suffer from insomnia and night waking during your keto transition, many people claim their sleep is better and deeper after they get into ketosis. And it turns out there’s some science to back these claims.

This guide will shed some light on all things keto-sleep related with topics like:

You spend about one-third of your life asleep, which is about 250,000 hours over the course of one lifetime[*]. Still, sleep is one of the most mysterious parts of being human.

One thing we know for sure? Sleep is vital — not only to daily performance and brain function — but it’s also the key to longevity and health. So, it makes sense that you want to know for sure how your ketogenic lifestyle is affecting your sleep.

First, some vital facts about sleep.

Sleep For Performance And Longevity

A full night’s rest for the average adult should be between seven and nine hours, which is why many people aim for eight hours each night.

However, everyone has different needs when it comes to sleep. And that depends on various factors from your diet and activity levels to your age and stress levels[*].

Sleep is when your body gets a chance to rest and clean house. It’s when your body repairs and grows new muscles and other tissue, builds bone, and strengthens your immune system. Brain cells, specifically, use the time that you’re asleep to flush molecules associated with brain degeneration[*].

Chronically sleeping less than six hours a night increases your risks for[*]: 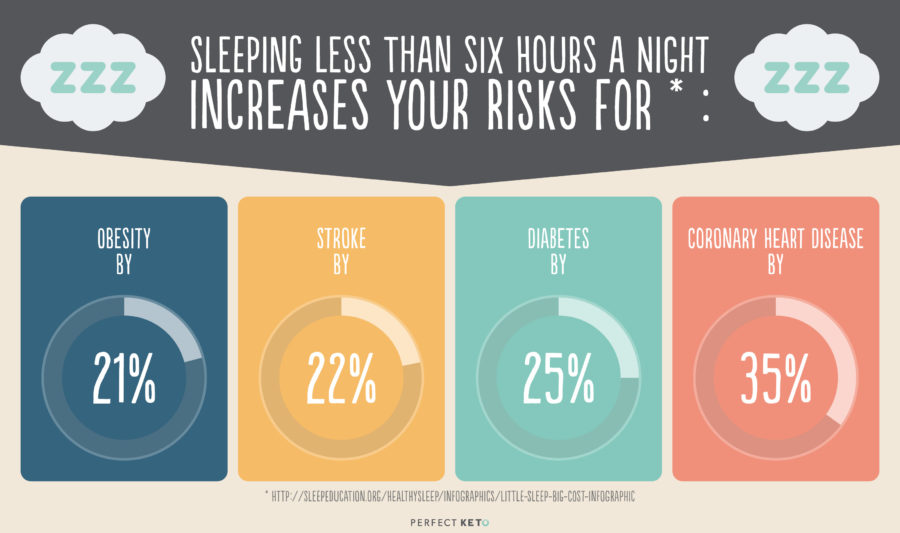 Neglecting sleep on a regular basis? You’re much more likely to pack on the pounds unintentionally[*].

Researchers noticed people who sleep less tend to snack more often, crave carbohydrate-rich or sugary comfort foods, and eat more calories during the day than those who get their recommended hours of beautyrest[*].

This was demonstrated in one study where participants were each given the same calories to eat, but half the group slept a solid 8.5 hours while the other half was only allowed 5.5 hours of shuteye.

The poor folks only sleeping 5.5 hours were[*]: 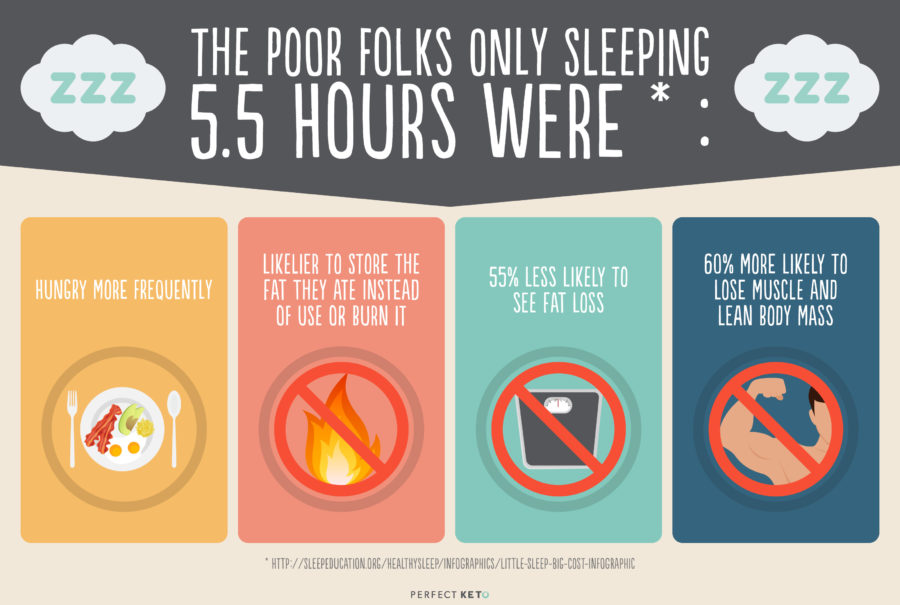 Those are all huge issues standing in the way of your weight loss and body goals, and they all stem from a lack of quality sleep.

In addition to jeopardizing your overall health, poor sleep also leads to: 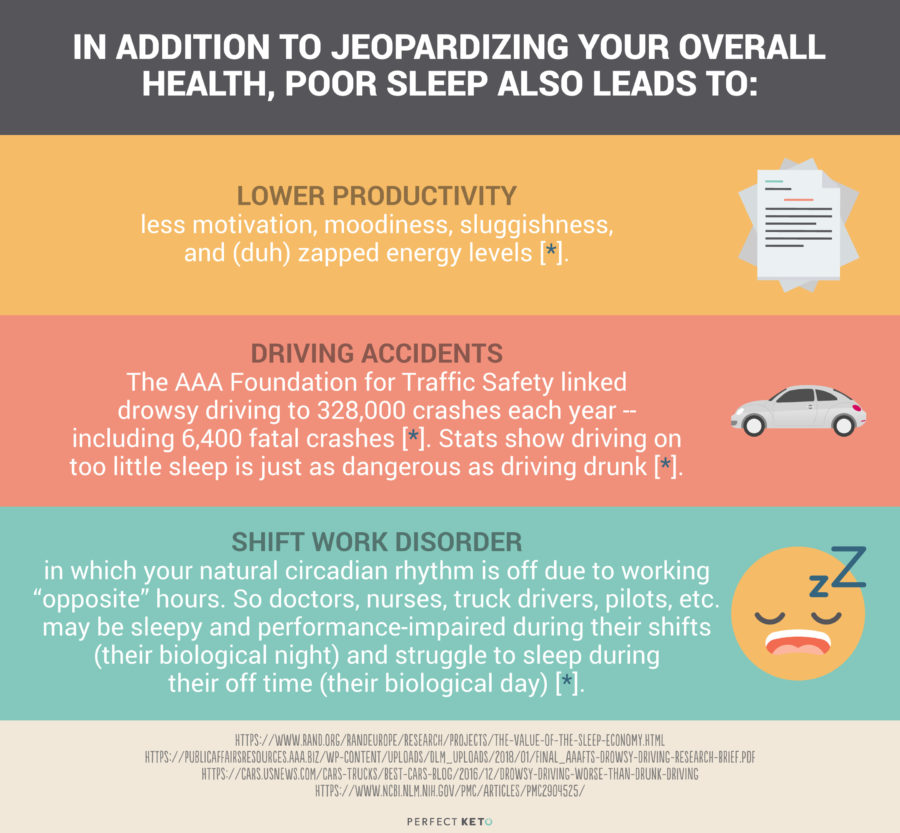 The U.S. Centers for Disease Control and Prevention (CDC) says only 1 in 3 Americans clock more than seven hours of sleep regularly[*].

So since most of us need around eight hours of sleep each night, 75% of us don’t even know we’re doing wrong.

There’s a whole science to the basic structural organization of sleep known as sleep architecture.

According to this basic architecture, your body experiences two different kinds of sleep on an alternating cycle[*]: 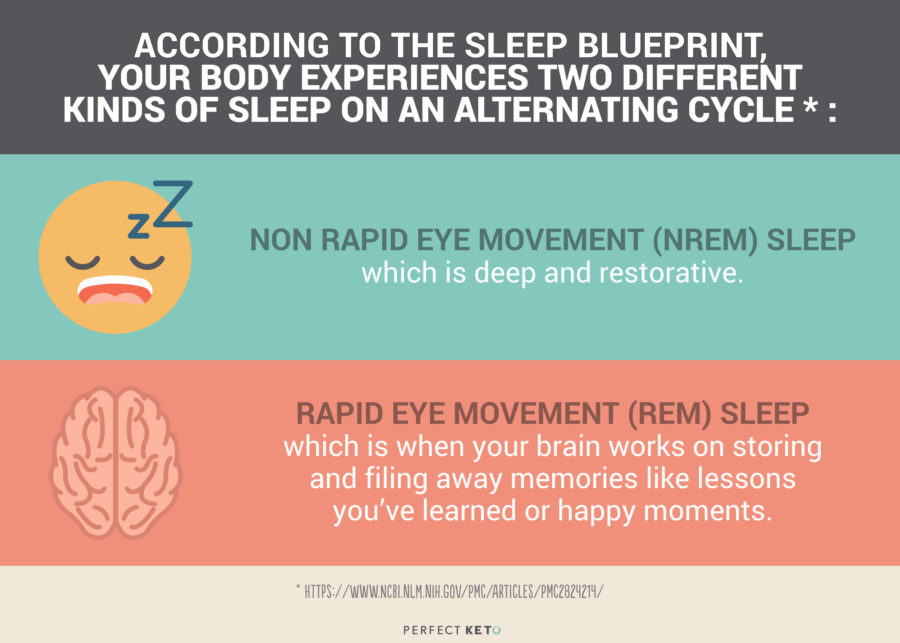 Your first sleep cycle lasts between 70 and 100 minutes; following cycles last longer for around 90–120 minutes each[*].

About 75–80% of your total time spent sleeping happens during NREM sleep[*].

There are three stages to NREM sleep[*]:

So why do you need to know about these sleep stages?

Because even though most sleep happens in Stage N2, Stage N3 sleep may be the first to disappear if you’re cutting your sleep schedule short[*].

Shorting yourself on deep sleep is terrible for your health.

Why You Need Deep Sleep

You need deep sleep to perform basic physical and intellectual activities. You might be able to function, but you will struggle. Like saying or doing something super awkward just because you’re exhausted[*].

Another reason you need deep sleep? You must pass through all three stages of NREM sleep before you get to REM sleep.

REM sleep makes up 20–25% of your total sleep time. Physically, it’s characterized by a period of rapid eye movement, where your eyeballs move rapidly from side to side as you snooze.

Every REM cycle lasts about 90 minutes and each period should ideally get longer as the night goes on[*].

As the longest and final sleep cycle, it’s when you’re most likely to have vivid or strange dreams[*].

It’s also when your brain processes everything from the day and stores it in your long-term memory bank.

So, you need all three stages, uninterrupted, to get a truly refreshing night’s sleep.

How The Keto Diet Affects Your Sleep

While there have been grumblings about how a low carb diet may decrease your total time spent sleeping, new research shows that the quality of your sleep gets better when you’re eating keto.

That’s because your body may be able to speed through early stages of sleep and enter those deep stages faster, which may lead to a better night’s rest and even better health outcomes.

Let’s see what the science says.

The Science of Keto Sleep in Studies

The National Sleep Foundation (NSF) describes a good night of quality sleep as[*]:

Now think back to your sleep pre-keto diet.

Were you experiencing nights of high sleep quality according to those four signs? Or did you struggle to fall asleep or stay asleep?

Poor sleep quality is shockingly common. Between 50 and 70 million Americans have a sleep disorder like[*]:

A ketogenic diet may be able to improve those four markers of sleep quality, alleviate certain sleep disorder symptoms and triggers, and give you more energy when the sun’s up.

Here’s what the evidence shows about how keto sleep may be different from your old sleep patterns:

During one study to evaluate the sleep of 18 children with therapy-resistant epilepsy, researchers put participants on a ketogenic diet (KD) for three months.

A keto diet helped reduce the frequency and severity of seizures — an obvious win in and of itself. But it also changed the participants’ sleep cycles.

Thanks to the additional SWS and REM sleep time, researchers noticed “a significant correlation” between more REM sleep and an improvement in the children’s quality of life[*].

Later, 11 children from the study continued a keto diet and were re-evaluated after 12 months. Researchers found a sustained keto diet:

This is great news if you find yourself yawning too much during the day, as is this next study.

Narcolepsy comes with a number of symptoms, from muscle weakening to sleep disturbances. But everyone with narcolepsy will experience Excessive Daytime Sleepiness (EDS), which is characterized by an irresistible urge to sleep during the day — every day[*].

Scientists measured their symptoms using the Narcolepsy Symptom Status Questionnaire (NSSQ), which has ratings for issues like sleep disturbances and ability to concentrate[*].

The participants on the LCKD not only improved their daytime sleepiness, they also lowered their NSSQ-Total score by 18%[*].

So while you may not be using a keto diet for better sleep, losing weight with one does lead to a healthier sleep cycle.

An estimated 22 million Americans have obstructive sleep apnea (OSA). And 86% of obese people with diabetes suffer from OSA[*].

With OSA, your body has a hard time getting all the oxygen it needs while you’re sleeping. This causes you to snore, choke, or gasp for air in the middle of the night and wake yourself up just to breathe.

As you can imagine, choking and gasping for air all night can really affect your quality of sleep.  People with OSA often also deal with[*]:

Thinking OSA is just an annoyance is the wrong attitude. OSA can have deadly consequences for your health as a diagnosis:

Since most people suffer from OSA because they’re overweight or obese, it makes sense that losing weight can help alleviate symptoms or get rid of OSA altogether.

And since keto blasts away fat, you may be able to lose a significant amount of weight and reverse the OSA that comes with it.

That’s why researchers in one study put six morbidly obese participants ranging from 12 to 15 years old on a modified version of a keto diet. For eight weeks, participants ate a high-protein, low-carbohydrate, and low-fat diet known as K1.

Then, participants followed a second diet with additional carbs for 12 weeks after that (K+2 diet).

Impressive scale victories aside, what does this trial show about sleep?

Every participant recorded excessive slow wave sleep times and minimal REM sleep when the study began. But the weight loss after a keto diet increased REM sleep and decreased SWS to “near normal” levels.

The conclusions scientists made?

A ketogenic diet can be used “effectively for rapid weight loss” which then helps restore a healthy sleep cycle.

While we still need more research to figure out the complicated ins and outs of keto and sleep, these studies are promising for anyone struggling to lose weight or increase the quality of their sleep, or both.

But what if you had regular, restful sleep cycles until you started the keto diet? Yes — you’re not alone. Many people experience something called keto insomnia, and it’s completely normal.

How To Make It Past Keto Insomnia

In an ironic twist of fate, many new keto dieters report suffering from insomnia after ditching carbs even if they never had trouble sleeping before.

There are several causes for sleep disturbances or insomnia which aren’t diet-related, including:

But if your insomnia just started as a result of your keto diet, the most likely causes are:

A Note On Energy-Boosting MCTs

If you’re suffering from keto-induced insomnia, it might be because you have too much energy. Medium chain triglycerides or MCTs are a type of fatty acid that bypass your normal digestive process and go straight to your liver for ketone conversion.

That means fast, clean energy for your brain and body. Which is great news. But not at night.

MCTs aren’t technically a stimulant, but many people report feeling huge bursts of energy, improved brain fog, and overall better performance when they take MCTs. Use it too close to bedtime and it might affect your ability to fall asleep or stay asleep.

That’s why the best time to use MCT oil or MCT oil powder is:

The good news is once you time your MCT oil intake right and get past the fat-adaptation phase, the short-term side effect of keto insomnia will pass and you’ll be scoring all the healthy sleep perks we dished today.

Your diet can affect your sleep patterns — and vice versa — sleep problems can impact your food choices the following day. So it’s critical to make sure both of these work on your behalf.

While side effects of a ketogenic diet plan may include temporary sleep issues, your overall sleep quality, well-being, and body composition will change for the better if you stick to it.