Whether you’re on the first weeks of your ketogenic diet or already fully immersed in the keto lifestyle, you might be craving your favorite high-carb dishes. If you’re a Mexican food fan, you may be dreaming about soft tacos or crispy tortilla chips dipped in chunky avocado guacamole. But are corn tortilla carbs allowed on keto? 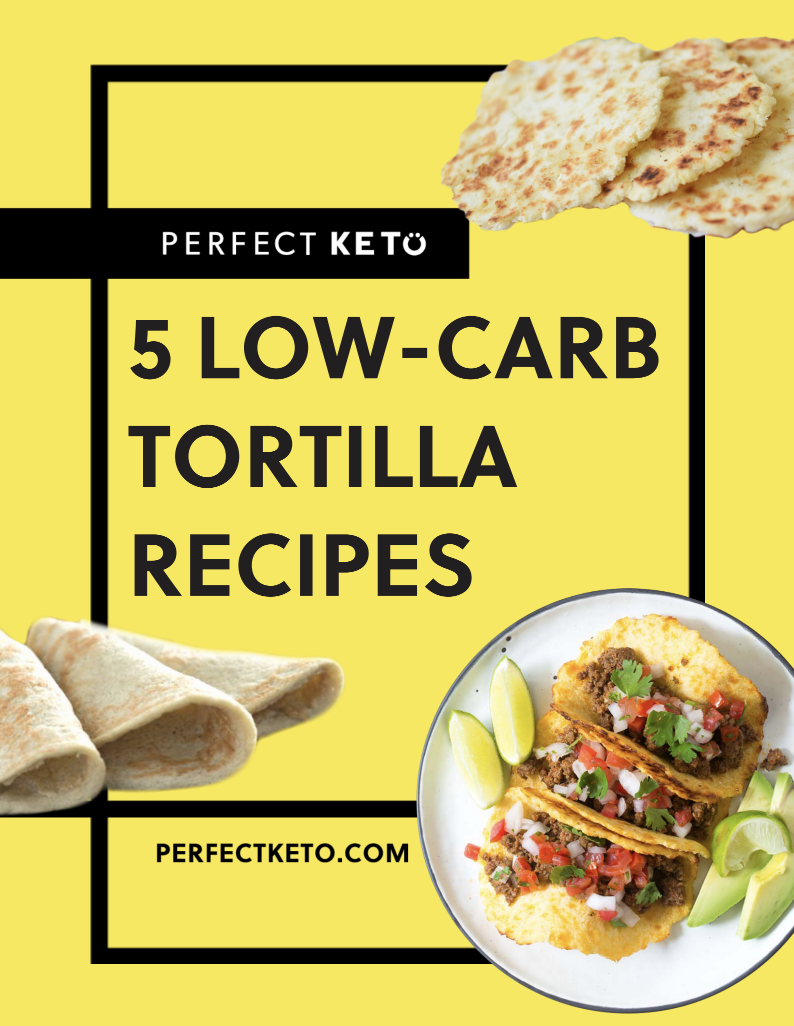 Mexican dishes like quesadillas, tacos, enchiladas, fajitas, and burritos are usually quite high in carbs, and that’s mainly due to one ingredient: tortillas.

Corn tortilla carbs can quickly pile up, surpass your daily carb values, and kick you out of ketosis. But there might be a way to include these Mexican staples in your keto meal plan.

There are two types of tortillas found in restaurants and grocery stores all over the country today — wheat tortillas (including whole-grain or whole-wheat) and corn tortillas.

While corn tortillas may have started as the most common tortilla, wheat tortillas became extremely popular once it was discovered that wheat flour could provide a solid tortilla base.

Versatility is one of the main reasons that tortillas are so popular. Tortillas are a type of flatbread that can be eaten hot or cold and used in several different dishes.

Flour tortillas are often softer and more pliable option of the two. Not to say corn tortillas don’t have similar features. However, they have a more chewy texture in comparison to flour tortillas. They can both be served soft or hard and make great chips.

When you inspect the nutrition facts of tortillas, their macronutrient value varies depending on whether you make them at home, buy them pre-packaged in the grocery store, or order them in restaurants.

Your typical corn tortilla is about 61 total calories for a one-ounce serving (or 28 grams), including 12 grams of net carbohydrates, 1 gram of total fat, 2 grams of dietary fiber, and 2 grams of protein[*].

Wheat flour tortillas are similar, providing a total of 87 calories per one-ounce serving size (or 28 grams,) including 14 grams of net carbs, 2 grams of total fat, 2 grams of protein, and less than 1 gram of fiber[*].

When it comes to vitamins and minerals, corn tortillas might have the upper hand. While wheat flour is overly processed and stripped of almost all of its nutrients, yellow corn, the main ingredient of this Mexican staple, comes packed with vitamin A, lutein, and folate[*].

Vitamin A and lutein can protect your eye health while folate is an essential vitamin that can help prevent cognitive decline, fatigue, and insomnia[*][*].

To fully profit from its health benefits, make sure you read the labels carefully and choose tortillas that are non-GMO and free of harmful trans fats and hydrogenated oils.

When Tortillas Fit Into a Low-Carb or Keto Diet

With both flour and corn tortillas sitting around 12-15 grams of net carbs per ounce, it would be hard to have more than one small tortilla and not go over your daily carb limit. When you think about it, one ounce is quite small and wouldn’t fill you up.

But if you want to have tortillas while following a low-carb, keto, or low-calorie diet, this (small) amount would be the way to go.

The keto diet recommends that your daily intake of net carbs be anywhere between 20-50 grams, which means that having over two ounces worth of tortillas can possibly kick you out of ketosis.

However, there are ways to consume your favorite Mexican dishes on a low-carb or keto diet. Besides substituting regular tortillas with a low-carb tortilla recipe, those who lead more physically active lives have the opportunity to follow a targeted keto diet (TKD) or cyclical keto diet (CKD).

TKD is a type of keto diet that caters to more active people, allowing for an extra 25-50 grams of carbs up to 60 minutes before and after their workout window.

The CKD, on the other hand, is meant for athletes who train at such high intensity that their body requires additional carbs in order to get that glycogen back to their muscles.

The CKD follows a standard ketogenic diet five days of the week, whereas on the other two days (or 24-48 hours), it calls for a high-carb, low-fat ratio where you can consume anywhere from 400-600 carbs (known as the carb-loading period).

When You Should Avoid Tortillas

Tortillas may not be the best option for those following a low-carb or keto diet. You may want to steer clear of them in general, unless you’re making them yourself.

While the glycemic index of corn tortillas is considerably low — especially if you make them yourself — pre-packaged flour tortillas might have ingredients that could be damaging to your health.

The body processes enriched bleached white flour just like sugar, creating a rapid increase in blood glucose, therefore activating a strong insulin response. This creates a sudden burst of sugar in your cells, which could be avoided by choosing a low-carb flour alternative.

You may also want to avoid flour tortillas if you’re intolerant or sensitive to gluten. Because they’re made directly from wheat grounds, flour tortillas are not gluten-free and may create some undesired side effects such as bloating, constipation, abdominal pain, headaches, skin issues, fatigue, anxiety, and more[*].

While a one-ounce serving of tortillas will not necessarily kick you out of ketosis, chances are most tortillas you can buy nowadays will come in a much larger serving.

If you want to eat authentic corn or flour tortillas, making them at home would be your best bet. Even in the scenario of homemade tortillas, one tortilla (or about 50 grams) could contain up to 30 grams of total carbohydrates per serving. This amount of carbs uses up more than half of your daily allowance while on the keto diet, putting you at risk of getting kicked out of ketosis.

When it comes to corn tortilla carbs, it’s best to avoid them and opt for a healthier alternative.

Be aware that there will most likely be some hidden carbs in your diet throughout the day as well, whether you recognize them or not.

The best way to include tortillas in your meal plan is either to make your own low-carb tortilla version at home or if you’re following a TKD or CKD. This will allow a window of high-carb intake while still following the ketogenic diet guidelines.

When it comes to this staple Mexican food, tortillas are too high in carbs for your daily values.

For keto versions of your favorite high-carb dishes, check out these delicious and decadent recipes: