Bacopa monnieri is a perennial herb with nootropic and other benefits — and very few side effects. Known as Brahmi in traditional Indian Ayurvedic medicine, Bacopa benefits are said to be many. It’s been used to improve mental clarity and treat ulcers, indigestion, tumors, and mental problems.

Today, Bacopa is drawing the attention of researchers as a potent nootropic herb that may improve cognitive function and support the health of brain cells.

Read on for more about the health benefits of Bacopa and how it might help with brain function and stress.

What Is Bacopa Monnieri?

Bacopa monnieri is a perennial, non-aromatic herb that is native to wetlands in Asia, Africa, Australia, Europe, and North and South America.

Bacopa’s leaves are succulent, oblong, and about 1/8 to 1/4 inch thick. Its flowers are small and white, with four to five petals. It is also grown commercially as a medicinal and nootropic herb. You might see it by other names like water hyssop, thyme-leaved gratiola, herb of grace, or Indian pennywort.

An aquatic plant, Bacopa monnieri mainly grows in swamps, and can even grow in brackish water. Bacopa can be grown hydroponically, as an aquarium plant, or in bog gardens or ponds. Growers often propagate Bacopa plants through cuttings[*].

History and Traditional Uses of Bacopa

Bacopa has been used in Ayurveda, the ancient Indian system of medicine, for at least 1,400 years. In Ayurvedic medicine, Bacopa is called “Brahmi” after Brahma, the Hindu creator god[*].

According to Ayurveda, Bacopa is heating, pungent, bitter, emetic, and has laxative effects.

Ayurvedic practitioners consider it useful for ulcers, tumors, enlarged spleen, indigestion, inflammation, leprosy, anemia, and biliousness. For problems of the spirit or psyche, Bacopa is incorporated into ghee (clarified butter), to improve absorption.

The herb has also been used in the Unani Perso-Arabic system of traditional medicine, which is based on the teachings of the Greek physician-philosophers Hippocrates and Galen.

In Unani, Bacopa monnieri is known as Jal Brahmi. Unani considers Bacopa bitter, with aphrodisiac properties. It was used to treat scabies, syphilis, diarrhea, fevers, and as a blood purifier[*].

In traditional systems of medicine, every part of the Bacopa plant has medicinal properties. In India, people also use Bacopa in cooking for flavor and added health benefits.

How Does Bacopa Work?

The herb contains an array of active compounds that can affect your body and brain. Each compound exerts unique effects, as well as synergistic effects when taken together in a Bacopa capsule or extract.

Bacopa monnieri works by changing the levels of neurotransmitters like dopamine, serotonin, and acetylcholine in your brain. It also balances stress hormone levels like noradrenaline and corticosterone in animal studies[*].

Not only can it modulate neurotransmitter levels, it may also increase cerebral blood flow and change the translation and expression of specific receptors in your nervous system. This is how Bacopa may improve learning, memory, sleep, relaxation, and mood[*].

According to studies, Bacopa also affects the levels and action of brain-derived neurotrophic factor (BDNF)[*].

BDNF is associated with increased neuroplasticity (the ability of your brain to change and learn new things) and lower levels of depression. BDNF is also neuroprotective, meaning it protects against injury or damage to your brain and nervous system[*].

Another way Bacopa exerts neuroprotective effects is through antioxidant, anti-inflammatory, and immune-boosting mechanisms. It can enhance the function of your body’s natural antioxidant defense system, reducing oxidative damage[*].

Studies show that Bacopa reduces hydrogen peroxide levels, lipid peroxidation, and other measures of oxidative stress that are associated with cell damage and inflammation[*]. 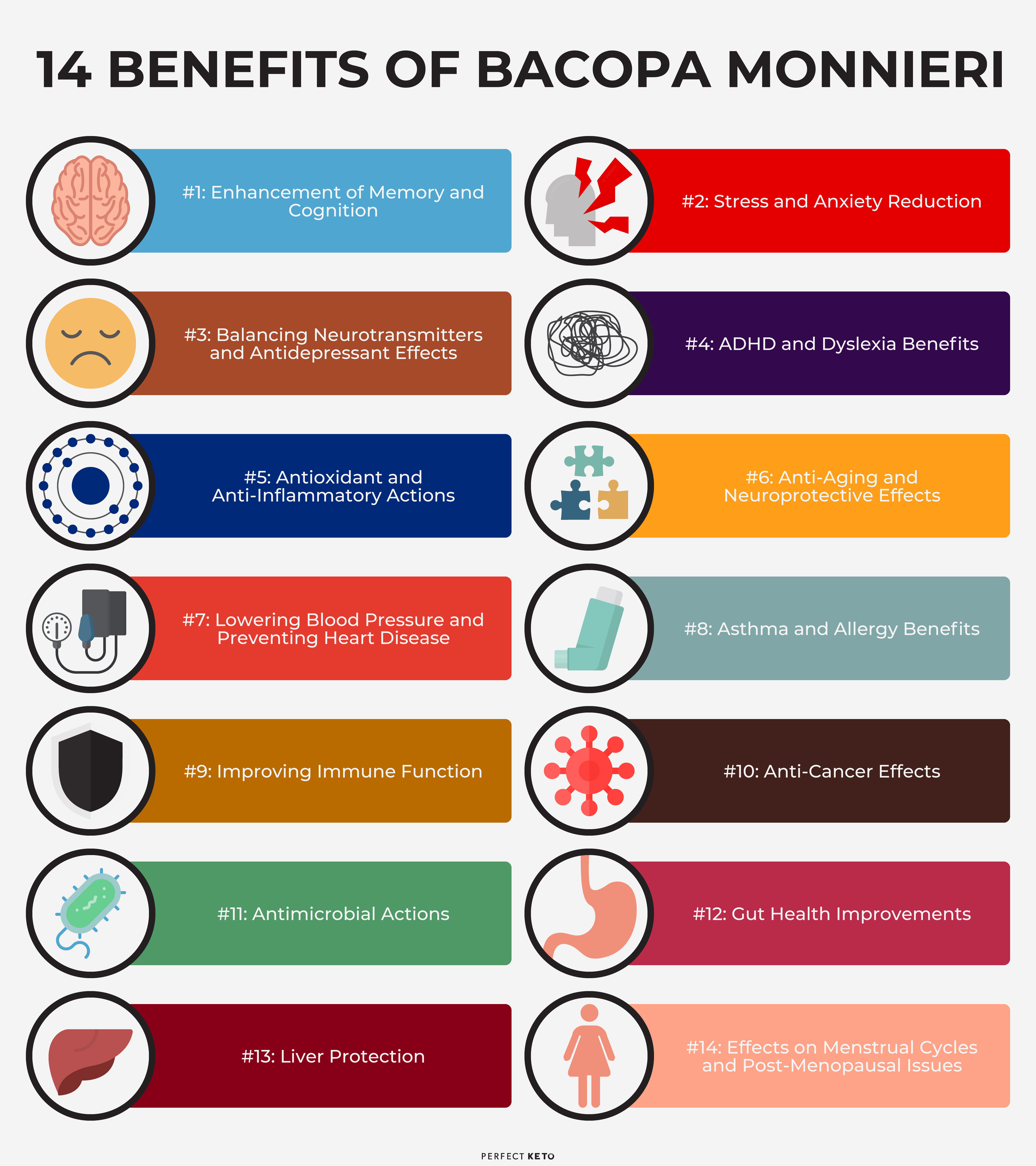 Numerous studies support that Bacopa monnieri has a nootropic effect in adults and children, enhancing brain health and memory.

The cognitive effects of bacopa monnieri are immense. At 320 or 640 mg doses of Bacopa monnieri can improve multitasking stress reactivity and reduce anxiety during demanding cognitive tasks, allowing people to do multiple tasks at once[*].

In a 90-day trial, 62 participants given 300 milligrams of Bacopa extract per day experienced improvements in spatial memory, working memory, and rapid visual processing[*].

A review of five studies found Bacopa monnieri improves language skills in children including vocabulary, spelling, processing sounds, and understanding words[*]. It also increases the number of items children can recall during a test[*].

In a study of 300 children, Bacopa improved spatial working memory and strategy[*].

Bacopa reduces the perception of stress and anxiety in healthy people as well as people suffering from anxiety. In a double-blind trial, the herb decreased cortisol levels and perceptions of stress during demanding tasks[*].

In people with anxiety and neuroses, long-term Bacopa supplementation enhanced memory and learning[*].

Bacopa can also reduce stress-induced damage to the hippocampus, the primary area of your brain involved in memory formation[*]. Studies in rats have also confirmed Bacopa’s anti-stress properties[*][*].

Bacopa increases brain levels of BDNF and serotonin, both of which have antidepressant effects, as well as other neurotransmitters like dopamine[*][*].

In one study, Bacopa was found to help prevent seizures in epileptic patients, caused by an imbalance of Gamma amino butyric acid (GABA) levels in the brain[*].

In another similar study, children aged 6–12 (who were diagnosed with ADHD before the age of 7), found that Bacopa reduced symptoms of ADHD and that the children tolerated it well[*].

While the benefits of Bacopa for dyslexia have not been studied in clinical trials, preliminary evidence suggests it may be helpful[*].

A neuropharmacological review of studies of Bacopa’s effects on children found that it improved their language domain performance[*].

Bacopa monnieri can have a wide range of anti-inflammatory actions in your body and brain, most of which are caused by its antioxidant effects.

An extract of Bacopa promotes scavenging of free radicals and protects brain cells against cytotoxicity (cell toxicity) and DNA damage that may lead to Alzheimer’s disease[*].

Bacopa also has a dose-dependent capacity for scavenging free radicals and preventing DNA damage in prostate glands of aging mice, which may translate to human prostate issues[*].

Inflammation and cell damage appear to be major causes of Alzheimer’s disease and other forms of dementia and degenerative aging-related brain disease.

Researchers speculate Bacopa could reduce the likelihood or delay the onset of neurodegenerative and other aging-related diseases by reducing chronic inflammation and other effects related to aging[*][*].

According to a review of six different studies, Bacopa improved memory recall in people with dementia or significant cognitive impairments[*].

In a study of 35 people over the age of 55, an extract of Bacopa monnieri improved their total memory scores, particularly logical memory and pair associations[*].

Studies of cell cultures and animal models predict that Bacopa monnieri may also be neuroprotective in Huntington’s disease and Parkinson’s disease[*][*][*][*].

No large randomized controlled trials have yet demonstrated that Bacopa monnieri is effective in reducing blood pressure and preventing heart disease. However, there is limited human data that supports the possibility.

In rats, an alcohol-based extract of Bacopa reduced high cholesterol levels[*]. Another study found that Bacopa, as part of an herbal formulation, protected against heart damage in rats[*].

Mast cells produce and release histamine, which is involved in your body’s allergic response. Bacopa acts as a mast cell stabilizer, reducing the production of histamine[*].

In Ayurveda, Bacopa benefits those with asthma[*]. Rat studies have found that the herb induced bronchodilation and reduced exhalation pressure, validating its traditional role in supporting asthma relief[*][*].

Traditional Ayurveda’s use of Bacopa to enhance the function of the immune system is validated by studies examining the effects of Bacopa monnieri on immune function[*][*][*].

Studies of healthy cells and cancerous cells predict that Bacopa monnieri and Bacopa extracts may help prevent cancer by preventing replication of cancer cell lines This can cause cell death of cancer cells and increase antioxidant levels[*][*][*][*].

In mice, oral Bacopa extract slowed the development of solid tumors[*]. Findings in rats predict that it may help prevent colon cancer[*].

In systems of traditional medicine, Bacopa leaf juice is given to children to help alleviate diarrhea[*]. Bacopa is also used traditionally for constipation and other stomach disorders[*].

A trial with 169 participants demonstrated a possible benefit of Bacopa monnieri in alleviating symptoms of irritable bowel syndrome (IBS)[*].

In normal rats and rats with type 2 diabetes, Bacopa had anti-ulcer and ulcer healing effects[*]. Bacopa enhances mucosal defensive factors in the gut, which may explain its anti-ulcer effects[*].

In India, fresh whole Bacopa monnieri plant is crushed and consumed with cow’s milk to help with irregular menstrual cycles[*].

Dosage and How to Take It

Bacopa monnieri is available in various forms. Dried Bacopa plant is sold as a powder, in capsules, in oils, and in mixed herbal formulations. Bacopa extracts are sold in powdered form in capsules and as a liquid extract.

Bacopa studies commonly use 300-450 milligrams of extract per day for healthy adults, but some studies have used 20-100 milligrams[*][*]. Children and other sensitive people should start with lower doses.

Take Bacopa supplements one to two times per day, before a meal, with a full glass of water. Because Bacopa is fat soluble, it absorbs better if you consume some healthy fats along with it.

If you have a green thumb, you can cultivate your own Bacopa plants in an aquarium or in wet, acidic soil. You can also try using it in recipes like Brahmi pesto.

Finally, you can get a good dose of Bacopa whole herb extract in Perfect Keto’s Nootropics.

As always, please consult your doctor before starting any new herb or supplement.

Safety, Side Effects, and Interactions

Bacopa monnieri has few side effects and low toxicity[*]. Even children tolerate Bacopa well in studies[*].

In one rat study, researchers found the upper limit was equivalent to a human dosage of 25 grams of whole Bacopa leaf per day[*].

There’s very little evidence that extracts of Bacopa have caused any serious clinical, neurological, or hematological complications, or damage to organs[*].

A study in mice found that Bacopa lowered sperm count but did not otherwise affect fertility or libido, and the effect was reversible[*]. If you are a man who has a low sperm count, or you’re a woman who wants to get pregnant, you may want to avoid Bacopa.

Herbs may seem harmless, but they are powerful medicine.

Because it can increase serotonin levels, you should ask your healthcare provider for medical advice if you take selective serotonin reuptake inhibitors (SSRIs) or other antidepressants before taking Bacopa[*].

High levels of serotonin can result in a dangerous condition called serotonin syndrome[*].

Bacopa inhibits liver enzymes called cytochrome enzymes that are involved in the metabolism of certain drugs, so ask your doctor for guidance before trying Bacopa monnieri if you are taking prescription drugs[*].

A study of Bacopa with amitriptyline, a tricyclic antidepressant, showed that Bacopa could increase levels of the drug[*].

Should You Try Bacopa Monnieri?

Bacopa has a long history of medicinal use and a long list of benefits, but if you are a man with a low sperm count, or a woman with pregnancy in mind, you should probably avoid Bacopa since it may temporarily (but reversibly) reduce fertility.

Because Bacopa is unlikely to cause serious side effects, it’s worth a try if you want to enhance your mental acuity, reduce stress levels, or if you suffer from anxiety or depression.

If you are at risk for Alzheimer’s or other forms of dementia, Bacopa may improve your brain function and health by reducing inflammation.

If you are interested in discovering cognitive Bacopa benefits, try it in Keto Nootropics. Mixed with ketones, herbs, and collagen, it can help sharpen your concentration, make you more alert, and get you through an afternoon slump.