Early humans prized offal, or organ meats, over other animal parts. They would reach straight for the heart, liver, and kidneys of an animal — often throwing the muscle meat (like steak) to the dogs.

Our ancestors were onto something. As it turns out, organs are some of the most nutrient-dense foods on the planet.

In this guide to offal, you’ll learn the specific health benefits of liver, kidneys, heart, and more, the difference between organ meats and multivitamins, and how to bring offal into your diet and make it taste good.

Offal refers to an animal’s organs and entrails. These nutrient-rich organs — also called variety meats — are featured in many international cuisines, but are rare in most Western diets.

The four typical kinds of offal are chicken offal, beef offal, lamb offal, and pork offal. Offal dishes often include the tongue, heart, liver, kidneys, or intestines of the animal.

You may cringe at the thought of eating heart or liver. Many home cooks consider offal meats to be throwaways — mere animal by-products that are more appropriate as pet food (offal is also great for pets, by the way).

Yet many countries have organ-based dishes that whet millions of appetites every day. And offer an array of nutrients you can’t get in such density in other foods.

You’ll learn about some of these dishes later. For now, let’s talk about the health benefits of offal.

Our ancestors couldn’t take a slab of liver into the lab and analyze its nutrient density. Nonetheless, they prized it over muscle meat and could feel that it was good for them.

They were right. Organ meats — particularly liver, kidneys, and heart — serve as nature’s multivitamin supplements. Other types of offal are less nutrient-rich, but still have health benefits worth mentioning.

Below is a list of common offal along with nutrients found in each.

When it comes to organ meats, liver is king. While liver doesn’t taste great (unless you prepare it properly), it’s top of the list for nutrition.

Liver is a fantastic source of micronutrients that are hard to find elsewhere.

Of all the livers, beef liver is the best source of vitamins and minerals. Pork and chicken liver are good options too — but in terms of micronutrient requirements: a few ounces of beef liver can literally carry you through the week.

Liver is full of:

Heart is rich in CoQ10, a powerful antioxidant shown to be cardioprotective in high-risk patients[*].

In terms of antioxidant status, CoQ10 is 10 times more potent than vitamin E[*], making CoQ10 one of the most potent antioxidants available.

Like other meats, heart is also high in selenium, iron, and zinc. And since the heart is a muscle, it tastes more like normal steak than other offal does. Chicken hearts are probably your mildest option.

Kidney contains many of the nutrients that liver does, as well as high amounts of selenium — an antioxidant mineral required for immune health and sex hormone production[*]. Selenium is also important for renal health, or kidney function[*].

In other words, eating kidney is good for your kidneys.

Tongue has a similar micronutrient profile to other meats — high in iron, zinc, etc. — but it’s especially high in fat. The high fat content not only makes tongue tender, but also a great option for high-fat ketogenic diets.

Stomach and intestines aren’t packed with nutrients like liver, but they still contain a decent dose of selenium. Plus, like most entrails, these digestive organs are very high in collagen protein.

Tripe — the inner lining of an animal’s stomach — is probably the most commonly served form of this variety meat.

Brain has a mild flavor and high fat content. And if it comes from a grass-fed animal, it’s an extraordinary source of bioavailable omega-3 fatty acids.

And since high-fat, low-carb diets can stimulate production of neuroprotective ketones — you might say that eating brain is good for your brain.

Oxtails, pig tails, and bison tails are not internal organs, but they’re still considered offal. They’re gelatinous cuts that are rich in beneficial collagen protein and are perfect for stews or broths.

Sweetbread — a term from the 16th century — is not bread. Rather, sweetbread refers to the thymus, or gullet (esophagus), of an animal. Typically sweetbread is calf, lamb, cow, or pig gullet.

Sweetbread contains B12 and selenium, but it’s not a supplemental powerhouse like liver. It’s more of a delicacy[*].

From a nutrient-density standpoint, the best three organ meats are liver, heart, and kidney.

And if you could only choose one organ meat, choose liver. It has the most micronutrients of all the options on this list.

Humans evolved to get nutrients from food. Whole foods offer a complex array of enzymes, compounds, vitamins, minerals, and cofactors that you’ve evolved to digest. It’s quite different from taking isolated nutrients in a pill.

Organ meats like liver, heart, and kidney are nutritional powerhouses — not just for their individual nutrients — but for the synergistic effect of these nutrients when consumed together.

The idea behind this concept — called “food synergy” — is that nutrients like vitamin A, vitamin D, and magnesium don’t operate alone, but rather in tandem with other food-based compounds.

Take these nutrients in isolation (in pill form, for example), and they won’t have the same effect on your body.

Whole foods help you absorb nutrients better. For example, vitamins A, D, and K are called fat soluble vitamins because they must be consumed with fat for optimal absorption[*]. A pill alone won’t do.

Here are more examples of food synergy from a 2009 paper in the American Journal of Clinical Nutrition[*]:

Another reason to eat whole foods is to prevent nutrient toxicity. Too much supplemental vitamin A, for instance, seems to be toxic[*]. But unless you eat, say, polar bear liver — overdoing dietary vitamin A is highly unlikely.*

*Although you should check with your doctor if you’re pregnant and eating a ton of liver.

The case against pill-form supplementing doesn’t end with vitamin A. Consider the following:

Does this mean you should never supplement? Not at all.

There’s good research, for instance, on supplemental vitamin D and omega 3s (fish and krill oils) — both of which are difficult to get through diet alone[*][*]. Other targeted nutrients may also be appropriate, depending on the individual.

To cover your micronutrient bases, another good option is a full-spectrum greens powder. Green powders are made from real food — delivering nutrients closer to how nature intended.

But for a genuine superfood, nothing beats organ meat.

How Often Should You Eat Offal?

As you just learned, micronutrients from food keep your body running smoothly. And offal — especially beef liver — is packed with micronutrients.

A small amount of beef liver contains your daily — and sometimes weekly — needs for many nutrients such as iron, copper, zinc, folate, B12, choline, and vitamin A.

The good news is: when you eat beef liver, your cells store many of these nutrients. In other words, you don’t need to consume cow liver every day.

With this in mind, strategy #1 is to eat a decent hunk of beef liver (4-6 ounces) once per week. Then you can forget about liver until seven days later.

If you don’t want to eat four ounces of beef liver in a sitting, you can try strategy #2: eat a very small amount (an ounce or less) every day. You could make pâté, for instance, and dip in consistently before dinner.

How To Get More Offal Into Your Diet

Liver is a powerful food that can deliver all your micronutrient needs in one sitting. Heart and kidney are good too.

The trouble is that organ meats taste pretty terrible to most people. They’re pungent, gamey, earthy, and generally unpalatable on their own.

That’s what herbs, spices, and recipes are for. Here’s one tried and tested way to make organ meat taste delicious.

That should taste pretty good — but if you really can’t stand the taste of liver, there’s a fix for that too: make a chili.

Here’s an awesome, keto-friendly chili recipe. The only change is — in addition to the grass-fed ground beef — add some beef liver, chicken liver, kidney, heart, stomach and, if you’re feeling adventurous, gizzard. With all the spices and the mellowness of the ground beef, you won’t even taste the offal.

Check out this keto grocery list for more ideas on buying and preparing offal.

Offal Around The World 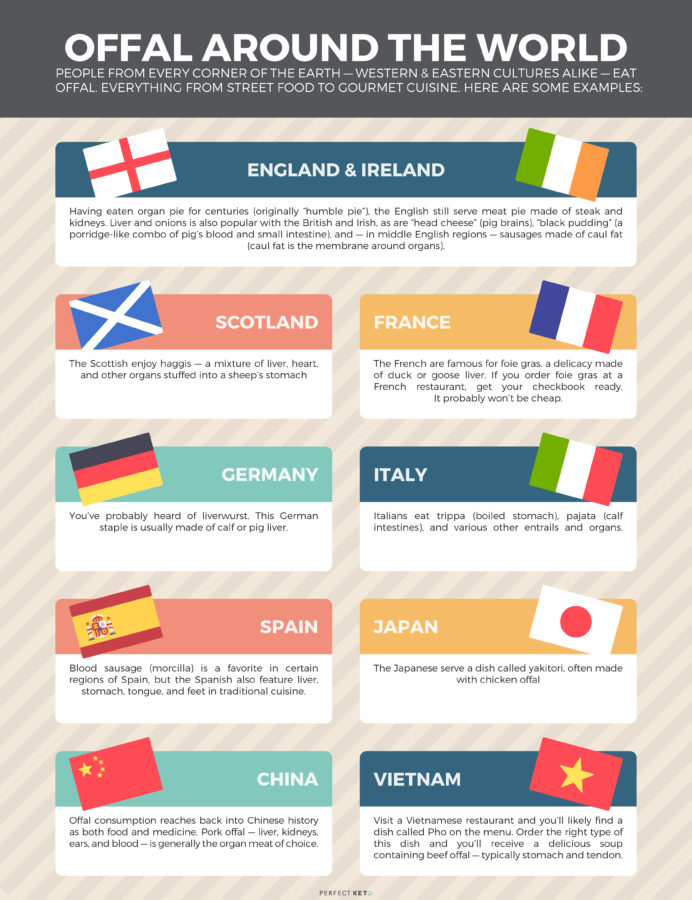 People from every corner of the earth — Western and Eastern cultures alike — eat offal. Everything from street food to gourmet cuisine. Here are some examples:

And this is just the tip of the iceberg. Nearly every countries and culture has signature offal dishes — suggesting that these animal parts are very good for you.

But, brain? Liver? Can all of these organ meats be good for you? And is there any danger to eating offal weekly?

Animal parts like liver and heart contain nutrients in the proper proportions to fuel your body.

So as a rule: eating offal is safe and healthy — and you should strive to include organ meats in your diet.

There are, however, some contraindications to be aware of:

Speaking of liver, is it really a good idea to eat this detoxification organ?

What About Toxins In Liver?

In animals and humans alike, the liver is a critical organ. It regulates cholesterol levels, aids in digestion, and helps clear harmful toxins from the body.

If you eat a detox organ, doesn’t that mean you’re eating toxins?

It seems logical, but no, that’s not the case. Toxins are detoxified — or methylated — in the liver, but they aren’t stored in the liver. Instead toxins are stored in adipocytes, or fat cells[*].

That’s why fatty cuts of grain-fed beef are often full of antibiotics, hormones, and whatever else the mistreated cow was eating.

It’s also a big reason why grass-fed beef is healthier than grain-fed beef: the fat doesn’t have such a high accumulation of toxins.

But what about grass-fed liver?

Do You Have To Buy Grass-Fed Liver?

Since most organ meats don’t store toxins, it’s not super important — from a health perspective — to buy grass-fed offal.

There are other reasons, however, to buy grass-fed animal products. Buying grass-fed:

Thousands of years ago, humans loved eating liver, heart, and kidneys. They knew, somehow, that offal was a superfood. The nutritional profile of beef liver, in particular, reads like a multivitamin label.

You don’t need much liver to meet your weekly quota of choline, zinc, folate, B12, vitamin A, copper, and iron.

These micronutrients help keep you strong and healthy — and since they’re coming from food, they’re vastly preferable to the pill form.

Diet can be complicated, but eating organ meats doesn’t have to be. Use these recipes to make organ meat taste great and include it in your diet every week. You’ll feel great.

2 thoughts on “Eating Offal 101: The Keto Guide To Organ Meats”