Of all the snack options available, popcorn seems to take first place as the most popular. The airy and salty crunchiness in popcorns seems to be make it one of the biggest crowd-pleasers.

So is popcorn keto-friendly or not?

Read on to learn about the total carb count and net carbs in popcorn, as well as practical tips to fit popcorn into your ketogenic diet.

Humans first cultivated corn or maize at least 10,000 years ago, in what is now Mexico. Corn is a staple food, and the most widely grown grain crop in the Americas, with production approaching 400 million metric tons per year[*].

A Modern History Of Popcorn

In the 19th century, people popped corn on stove tops by hand. Popcorn kernels were widely available on the East Coast of the United States, and the first written usage of the term “popped corn” was in John Russell Bartlett’s 1848 Dictionary of Americanisms.

Popcorn grew in popularity during the Great Depression as an inexpensive snack. The popcorn business thrived even as other companies failed, and popcorn production became a source of income for struggling farmers.

During World War II, sugar rationing took its toll on the production of candy, and American popcorn production tripled.

People began bringing their own popcorn to movie theaters, which dismayed theater owners, who felt that the snack distracted moviegoers. Soon, though, popcorn makers appeared in the lobbies of theaters throughout the United States.

Orville Redenbacher launched his famous popcorn brand in 1970, and in 1981, General Mills patented the first microwave popcorn bag. Popcorn consumption continued to increase in the ensuing years, and still today it remains the most popular movie night snack.

A single cup of air-popped popcorn, which weighs just 8 grams, has: 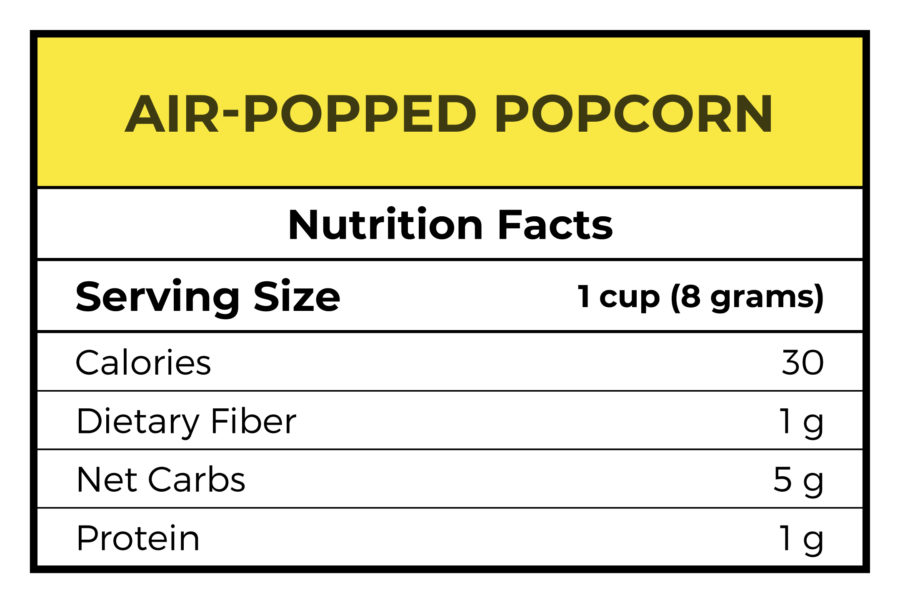 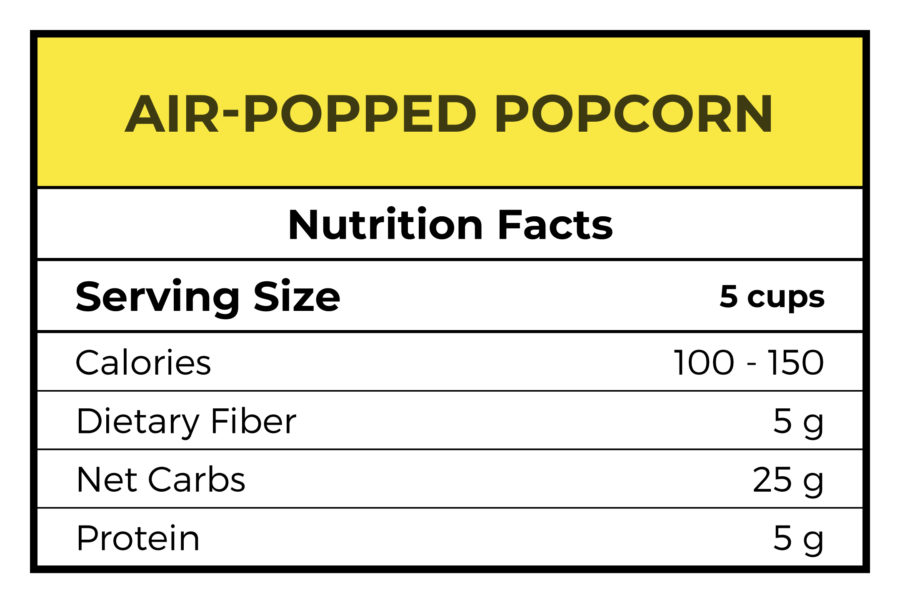 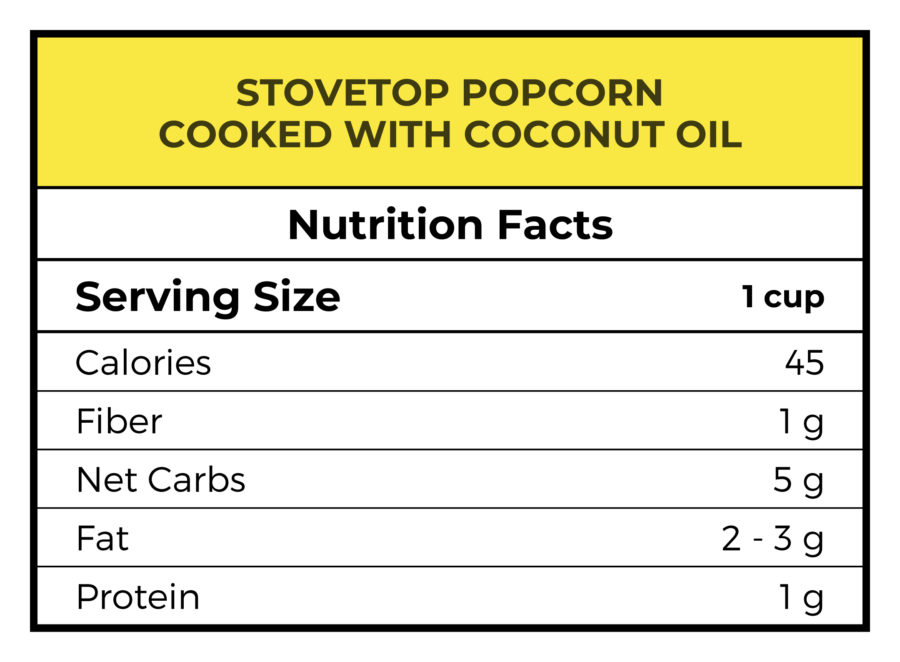 A five-cup serving of stovetop popcorn cooked in coconut oil has: 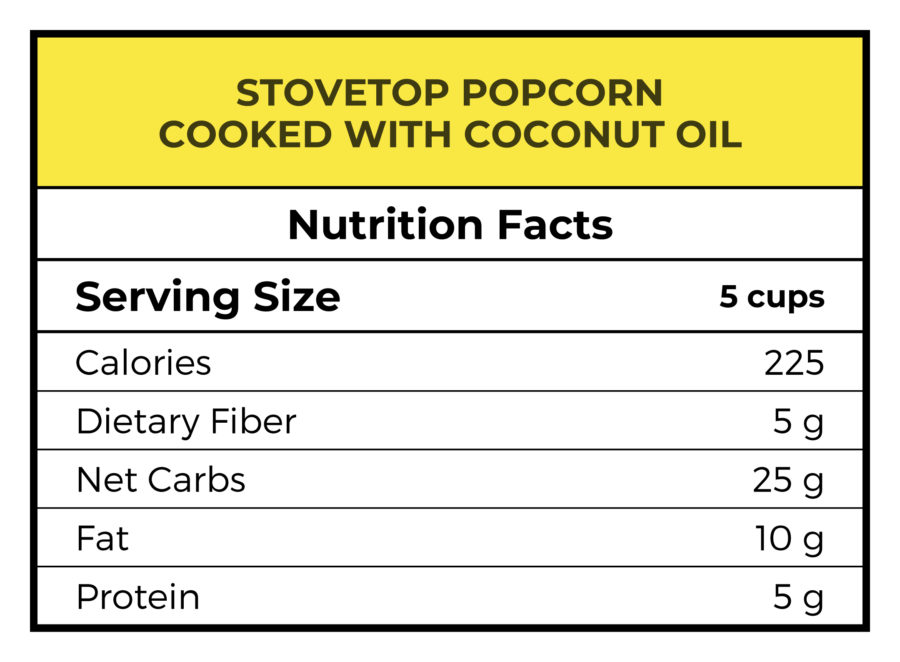 Air-popped popcorn has a relatively low glycemic index (GI) of 55. Thanks to its high volume and its fiber content, popcorn is also quite filling. This makes it easier to control your portions when compared to most other snack foods.

One caveat: Be sure to steer clear of microwave popcorn, which tends to have harmful preservatives and unhealthy refined oils high in omega-6 fatty acids.

Popcorn kernels contain an impressive amount of fiber, nutrients, and antioxidants, making it a tasty snack with a number of health benefits[*].

One study found that people who consumed one cup of popcorn felt more satiated and satisfied compared to when they ate the same amount of potato chips. Why? Popcorn is a whole grain, it’s high in fiber, and it’s nutrient-dense[*].

According to standard popcorn nutrition facts, you should be able to eat about a cup of popcorn and still stay in ketosis.

If you’re new to a low-carb lifestyle, or just starting the ketogenic diet, cutting out your favorite high-carb snacks can be a difficult process.

As your body adapts to ketosis, you may experience cravings for comfort foods, or temporarily feel a dip in your energy levels as you make the change.

Fortunately — as long as you’re careful — you can have popcorn on keto.

A single cup of oil-popped popcorn using coconut oil has just 4 grams of net carbs and 2-3 grams of healthy fat. It’s a great way to satisfy your cravings without kicking you out of ketosis.

However, there are other instances when popcorn won’t fit into your keto meal plan.

When You Should Avoid Popcorn on a Keto Diet

Which one seems more likely: having a single cup of tasty popcorn, or having five cups of popcorn in a sitting?

For most people, self-discipline around food is not the easiest thing. If you tend to eat lots of popcorn, then you probably shouldn’t make it a daily snack.

The number of carbs you can eat per day on keto will vary according to your body type, goals, and health history. Some people can eat a full five-cup serving of popcorn with 25 grams of net carbs and stay in ketosis, but that’s not the case for everyone.

If you find yourself overeating, gaining unwanted body fat, not losing weight, or otherwise not hitting your keto goals, you might want to avoid popcorn on keto.

If you do want to eat popcorn, use the stove top method or an air popper instead of microwave popcorn. That way you have control over what oils and any toppings you use, and you can avoid unnecessary artificial flavors and other unhealthy ingredients.

If you’re on the keto diet, you can use coconut oil, butter, or olive oil to cook popcorn on the stove, or you can add healthy fats after you air pop it.

When you go to the movie theater, keep in mind that theater popcorn is most likely highly processed and filled with harmful additives and added sugars. As such, taking your own keto snacks might be a wise decision.

Remember that even on a strict keto diet, popcorn won’t be your only source of net carbs. Don’t forget to factor in all carb content of other carbohydrate sources so you don’t exceed your limit and exit ketosis.

Whether you’re having a movie night at home or planning to see the latest flick at the theater, a little preparation goes a long way.

Prepare your own keto popcorn at home and portion it into a container, so that you don’t end up overeating and getting kicked out of ketosis. Here are some other low-carb snacks to consider:

Popcorn can be keto-friendly. While most people can’t get away with a full five-cup serving of popcorn every day when on the keto diet, it’s a viable option as a weekly treat.

Granted, popcorn is not the number one choice for a keto-friendly snack. But compared to most snack options, it’s low-calorie, filling, and free of trans fats and artificial flavors. (As long as you get it from a reputable source that doesn’t use any questionable ingredients.)

The key to enjoying popcorn on a ketogenic diet is to limit your daily net carb intake, control your portions, and track your progress towards your goals.

If you’re making progress towards your goals while eating popcorn, then it’s working for you. If you’re not making progress, it’s time to take a closer look at your calories, net carbs, and portion sizes, including popcorn consumption.

The bottom line is, if you’re a popcorn lover, this is a sugar-free, gluten-free snack option that can help make your keto lifestyle feel more balanced. Cover with some cheddar cheese or parmesan, grass-fed butter, and sea salt for a high-fat, savory snack.

15 thoughts on “Is Popcorn Keto-Friendly? Calories, Carbs, and Nutritional Facts”