Is Soy Good or Bad For You? Just the Facts - Perfect Keto

At some point along your health journey, you’ve probably wondered if soy was good or bad for you.

You’re not alone. There’s a lot of controversy surrounding soybeans, soy foods, and soy supplements. Some say soy is a health food, while others claim it’s more or less poison.

It’s important to be objective here. Since soy is such a common ingredient, you need to know the truth.

This article will review the science — just the facts — about the health effects of soy. Then you can decide for yourself.

Soy foods and supplements are derived from soybeans — a high-fat, high-protein legume grown across the world. Soybean oil, in fact, is the most consumed vegetable oil in America[*].

Soy is controversial. Some studies have shown health benefits from soy consumption, but others have raised concerns about how soy affects various hormones[*]. More on this later.

Soy has been an integral part of Asian cuisine for millenia — and most of the world’s soy consumption occurs in Asian countries. Popular dishes include natto, tempeh, and soy sauce.

Recently, however, soy has become more popular in Western societies like Europe and the United States. This is due, in large part, to the rise of vegetarian and vegan diets[*].

For vegetarians and vegans, soy represents a convenient source of affordable plant-based protein. In particular, soy protein isolate — the most common soy supplement — is a staple smoothie ingredient in many kitchens across the globe.

Soybeans are sometimes consumed whole as edamame, a popular Asian dish. Usually, though, soybeans are altered or fermented to make the following types of soy products.

With the help of various strains of bacteria, soy is fermented to create traditional foods like tempeh, miso, soy sauce, sufu, and natto. The fermentation process removes phytic acid–a compound that inhibits nutrient absorption–from the soybean.

Whole soybeans are also used to make soy milk and tofu, both non-fermented forms of soy. Soy milk is a popular dairy-free milk alternative, and tofu is simply solidified soy milk. Tofu is often used to replace chicken or fish in vegan recipes.

Over 60% of the vegetable oil consumed in America is soybean oil[*]. In terms of fatty acid content, soybean oil is mostly linoleic acid–an omega-6 polyunsaturated fat.

Excessive linoleic acid consumption explains, in part, the obesity epidemic sweeping across America[*]. That’s because too much omega 6 (and too little omega 3) creates inflammatory conditions that promote metabolic dysfunction and weight gain.

Soy protein, in case you were wondering, scored a 2.2. Not bad.

Whey protein and beef protein, however, scored 3.2 and 2.9, respectively. What about egg protein? An impressive 3.9.

The soybean is mostly fat and protein, with a moderate amount of carbohydrate. As you learned earlier, most of the fat in soy is linoleic acid — a polyunsaturated fat currently dominating the American diet.

One cup of soybeans contains[*]: 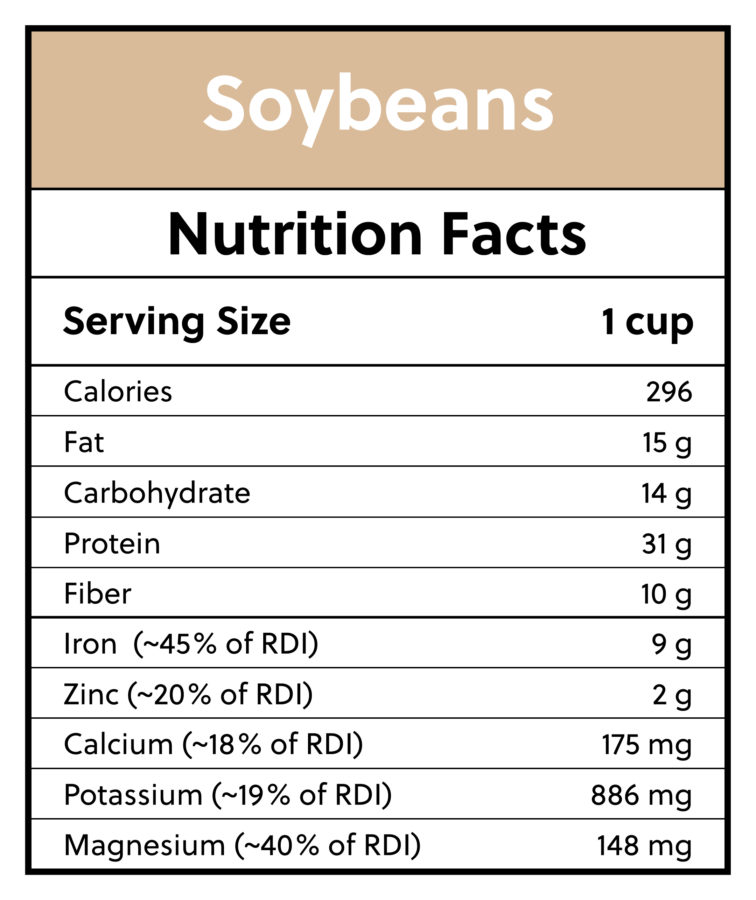 In addition to the above minerals, soybeans are also a good source of B vitamins like B2, B3 B6, and thiamin.

Soy is also high in plant-based compounds like isoflavones, phytosterols, and phytates. These compounds account for many of the potential benefits and risks of eating soy products.

There’s been a lot of research on soy. Some of it suggests health benefits, though it’s important to examine the facts here.

This evidence, however, doesn’t prove that soy prevents heart issues. Correlation doesn’t prove causation, and perhaps soy-eating populations have healthier hearts for another reason, like higher iodine or fish consumption.

Moving away from observational data, proponents of soy often point to the cholesterol-lowering effect of phytosterols, of which soybeans are a rich source. One 1995 meta analysis, for instance, found that soy protein consumption significantly lowered total cholesterol levels, LDL cholesterol levels, and triglycerides[*].

The isoflavones in soy may also exert antioxidant effects on blood vessels, slowing the progression of heart disease. Nonetheless, a 2017 meta analysis found no link between isoflavone consumption and CVD risk[*].

The story of soy and cancer is similar to that of soy and heart disease: The data is mostly observational, and nothing is proven.

One 2014 review found soy intake to be negatively correlated with breast cancer risk in Japanese women[*]. (More soy, lower risk of breast cancer). Another meta-analysis found that soy isoflavone consumption was linked to a lower risk of colon cancer, mostly in Asian populations[*].

Soy isoflavones, researchers believe, are the compounds to watch here. One particular isoflavone called genistein has been shown to inhibit cancer cells in a test tube[*].

In one controlled study, however, isoflavone supplementation did not affect PSA, the primary marker of prostate cancer risk[*].

Also, there’s some concern that the estrogen-mimicking properties of soy could have a pro-cancer effect–but there isn’t human evidence to support this[*].

In fact, one review found that soy isoflavones may prevent postmenopausal osteoporosis and improve bone strength in women[*].

The Risks of Too Much Soy

Eating soy has several potential side effects. Here are four of them.

Soy isoflavones, also known as phytoestrogens, can imitate the sex hormone estrogen in the human body. This isn’t always desirable.

In animals, high phytoestrogen consumption causes infertility and — in captive cheetahs — liver disease[*]. But in humans, the evidence is less robust.

In women, soy foods may increase the length of the menstrual cycle, though it doesn’t appear to interfere with ovulation[*]. In men, soy intake has been linked to decreased sperm count and sperm quality[*].

Also, at least two case studies exist in which men experienced low testosterone and erectile dysfunction in the context of high-soy diets[*][*].

Nonetheless, the bulk of the data shows that soy consumption doesn’t significantly affect sex hormones, fertility, and reproduction in humans[*].

Back in the early 50s and 60s, several cases of goiter (enlarged thyroid) were linked to the consumption of soy-based baby food. This problem stopped happening, though, when iodine was added to the formula[*].

Soy isoflavones can, in fact, deplete iodine stores — leaving less to be synthesized into thyroid hormone. Soy foods also interfere with the absorption of synthetic thyroid hormone, which is commonly used to treat hypothyroidism, or low levels of thyroid hormone[*].

With the exception of soy protein, most soy foods are high in fat. This fat mostly takes the form of omega 6 linoleic acid.

Yet linoleic acid isn’t just making mice fat. All that omega 6, researchers believe, is driving the obesity scourge sweeping across the United States[*].

Industrially-farmed soybeans have been genetically modified to withstand the herbicide glyphosate, the active ingredient in Roundup. This allows big soy interests like Monsanto to kill weeds without killing the GMO soybean plants.

Unfortunately, glyphosate then ends up in soy products, including baby food. Glyphosate consumption has been linked to a number of conditions including Alzheimer’s, Parkinson’s, cancer and autism[*].

If soybeans are organically farmed, however, they shouldn’t contain glyphosate. Look for organic soy products to avoid this toxin.

Is Soy Good or Bad For You?

Soy is everywhere, especially in Asian cuisine. So is soy bad for you?

Not necessarily. Soy is a decent source of protein, vitamins, and minerals. It also contains isoflavones that may improve blood vessel function and bone density

But it’s not all good. Soy has estrogen-mimicking effects, which in excess could disrupt reproductive health. Plus soybean oil is super high in inflammatory linoleic acid.

Finally, and most unfortunately, soy is a major GMO crop that’s often sprayed with Roundup. So if you’re going to shop for soy, shop organic.