Butter, Bacon, and Fat: The Truth About Keto and Cholesterol

How can eating a diet rich in butter, red meat, cheese, eggs, and bacon not raise your cholesterol levels? That’s like saying eating a whole pint of ice cream won’t raise your blood sugar levels, right? Far from it. As it turns out, the keto and cholesterol combo could be a good thing.

You see, a low-carb diet like keto will change your lipid profile — but maybe not in the way you expect.

If you’ve been wondering how entering ketosis helps you lose weight and feel more energetic without raising your cholesterol numbers, this guide will answer your questions with science-based evidence.

When you know exactly how cholesterol works in your body, you may see keto in a whole new light. You’ll also probably need to rethink everything you thought you knew about cholesterol.

Keto and Cholesterol: What You’ve Heard Is Probably Wrong

Cholesterol is a waxy substance only produced by animals and humans. Plant-based foods like fruits and veggies are cholesterol-free.

Eating foods high in cholesterol, they said, would then in turn give you high cholesterol.

You can see why their original theory made sense. When you see congealed bacon grease sitting in a pan, it’s not such a stretch to imagine the same happening in your body.

But this isn’t an accurate picture of how cholesterol truly works. In fact, many studies associating dietary cholesterol, high cholesterol levels, and an increased risk of heart disease have since been debunked[*].

When people talk about cholesterol, they’re usually referring to your lipid profile, or the fat and fatty acids in your blood (measured in a lipid panel). 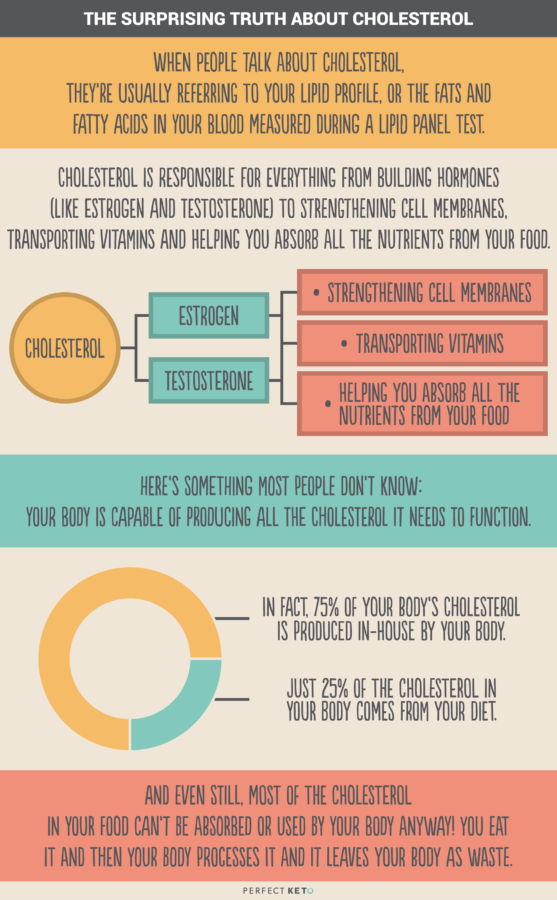 Cholesterol is responsible for everything from building hormones (like estrogen and testosterone) to strengthening cell membranes, transporting vitamins, and helping you absorb all the nutrients from food.

How Your Body Maintains Cholesterol Levels

A diet high in cholesterol has almost zero impact on your cholesterol levels because your body is smarter than you think.

Since it’s such a major producer of cholesterol, your body hustles hard to make sure your cholesterol levels are in constant balance all on their own (it’s called cholesterol homeostasis).

The 2015-2020 Dietary Guidelines for Americans is the first to get rid of the daily dietary cholesterol limit — something many countries eliminated years ago[*].

So if dietary cholesterol isn’t a high risk, and foods with high cholesterol don’t build up in your arteries like a clogged shower drain, what causes plaque formation?

The “Good” and “Bad” Cholesterol Myth

Unlike sugar and salt, which can mingle in your bloodstream, cholesterol is a fat that doesn’t mesh well with the watery nature of your blood. For cholesterol to work through your body, it needs to pass through vessels known as lipoproteins.

As their name implies, they’re part fat (lipo-) and part protein. Their sole job is transporting cholesterol to the cells and organs that need it most.

To be clear, HDL and LDL are not actual types of cholesterol — only what transports cholesterol.

What’s the difference between these two?

High Density Lipoproteins (HDL): The Ones You Want

HDL particles are produced in your liver and intestines and contain more protein than fat. This makes them denser (aka, high-density).

HDL has been crowned “good” cholesterol because it corrals all the cholesterol that’s not being used by your body and brings it all back to your liver. There it will either be recycled or leave the body as waste.

Why Is HDL Considered Good?

HDL is considered good because it boasts protective, anti-inflammatory properties that regulate your immune system and protect against certain types of cancer in those with type 2 diabetes and those without[*][*][*].

Plus, researchers believe your risk of developing type 2 diabetes increases by 4% for every 1 mg/dL drop in HDL cholesterol your body experiences[*][*]. So that means keeping your HDL high is a serious priority.

Though all this makes HDL sound like a plus, its greatest accomplishment is clearing out LDL particles, or the “bad” cholesterol, from your bloodstream.

Low Density Lipoproteins (LDL): The Ones to Watch Out For

LDL particles deliver nutrients and energy to your cells. The only problem is that unlike HDL, LDL particles move at a snail’s pace and have a tendency to get stuck in your bloodstream. When this happens, the vulnerable LDL gets attacked by free radicals and start to oxidize, or break down[*].

Oxidized LDL is much easier to sneak inside your artery walls.

This then triggers your immune system to go into a full-on inflammatory response, which sends white blood cells to capture all the dangerous oxidized LDL running amok.

Whatever doesn’t get wrangled by good HDL enters your arteries and starts the process of plaque buildup (aka, atherosclerosis)[*].

A standard lipid blood test will show you how much cholesterol lives inside the LDL particle, or the concentration, but that’s no longer the best marker for cholesterol health.

Scientists now know it’s not how much cholesterol you have, but your LDL particle number that makes the difference. This number measures how many LDL particles are floating in your bloodstream — and how big they are.

Small LDL particles carry a greater risk factor for heart disease as they can easily penetrate the artery walls and lead to buildup[*]. However, if you have mostly large LDL particles, your risks are pretty low because the chances of this happening are much slimmer.

Then there’s very-low-density lipoproteins (VLDL). These are even smaller, which means they’re much more likely to break into your artery wall, gunk up the operations, and lead to hardened arteries[*]. LDL carries cholesterol around your body whereas VLDL carries triglycerides.

Triglycerides are the most common form of fat in food. They create fuel for your body to use not in the short-term, but in the future.

Here’s how it works:

When your body breaks down carbs, some simple sugars are used quickly by your body for energy. Others cause an excess of sugar to build up in your bloodstream.

Your body then releases insulin to help that sugar get inside your cells and be used. But if your cells don’t need that energy, most of it will be converted to triglycerides, which will be stored as fat[*].

Because your body needs to produce extra triglycerides to deal with your sugar problem, you’re not only adding hard-to-get-rid of storage fat to your body, you’re also building up the levels of triglycerides in your blood. That’s why elevated triglycerides are often seen as a byproduct of insulin resistance.

In one study, researchers learned that eating sugar and high fructose corn syrup increased triglycerides, VLDL, and decreased LDL particle size while reducing HDL. Conveniently, when the scientists removed sugar from the control diets, a reversal of all of these was seen[*].

An increase in triglycerides can lead to higher cardiovascular risks and metabolic disorders like obesity and type 2 diabetes.

When you’re on a keto diet, you’ll be replacing triglyceride-raising carbs with healthy, omega-3 and omega-6 fats that boost HDL and increase LDL particle size, which will help your body balance cholesterol naturally again.

A Low-Carb Diet Like Keto Can Help You Balance Cholesterol

A high LDL reading isn’t necessarily bad if your particles are large and you have an awesome stockpile of HDL to sweep away all the LDL when it’s not being used. HDL prevents the accumulation of LDL so you don’t have clogged arteries, which means an increase in cholesterol as HDL particles may be a positive[*].

A low-carbohydrate diet like keto — yes, even with it’s high fat intake. Sylvan Lee Weinberg, former president of the American College of Cardiology, said that a low-fat, high-carb diet can no longer be defended by medical organizations because it:

“May well have played an unintended role in the current epidemics of obesity, lipid abnormalities, type 2 diabetes, and metabolic syndromes”[*].

Clearly, it’s time for something different. Limiting your fat intake and dietary cholesterol doesn’t work. When compared to low-fat diets, low-carb diets that boost ketone levels have been shown to be effective for boosting HDL while still allowing weight loss[*].

Research continues to show that a low-carb diet specifically[*]:

When participants in one study went high-fat, they experienced an average 20.6% increase in their HDL cholesterol levels — nearly four times what those in the low-fat group saw[*].

Another meta-analysis highlighted that low-carb ketogenic diets result in significant weight loss, increased HDL, and lower LDL levels over the course of a year[*].

And during a clinical trial of 40 adults with high triglyceride levels, a low-carb, high-fat diet resulted in a 51% decrease in triglycerides and a 13% increase in HDL[*].

While these results are worth getting excited about, what about starting a low-carb diet if you’re overweight, obese, or already have high cholesterol numbers?

Again, research shows that low-carb diets cause no harm to your health. In one study, obese participants lost 10 pounds following a low-carb diet and saw no ill changes to their overall total cholesterol[*].

Since men are more likely to have atherosclerosis and coronary heart disease than women, a group of scientists examined the effect a keto diet may have on overweight men. After just 12 weeks, the men noticed their LDL decreased by 8.9%, triglycerides reduced by 38.6%, and HDL jumped 12%[*].

The Truth About Keto and Cholesterol

Most of what is known about how cholesterol works has been based on the standard American diet,, which typically includes high levels of carbs.

As scientists continue to show that low-carbohydrate diets like keto can improve your health and lead to better total cholesterol numbers, there will be more research and results to discuss.

To lower your heart disease risk and boost your HDL and lower your LDL cholesterol, try adding healthy dietary fats like avocado and coconut oil and monounsaturated fat like olive oil to your diet ASAP.

These are keto-approved foods and excellent for your heart health no matter which diet you ultimately choose.

When you’re finally ready, check out the ultimate startup guide to the ketogenic diet and get ready for a healthier lifestyle.

19 thoughts on “Butter, Bacon, and Fat: The Truth About Keto and Cholesterol”