Can You Drink Coffee While Fasting? - Perfect Keto

Fasting means abstaining from foods and drinks that contain calories for religious, medical testing, and health reasons. Research suggests that it promotes ketosis, better insulin sensitivity, and a reduced risk of heart disease among other benefits (*). If you’re just learning how to fast, you could be wondering, can you drink coffee while fasting?

Having coffee while fasting is something that people are interested to know about. After all, most of us depend on coffee to get through the day, thanks to its ability to keep us alert and awake.

This article explains whether coffee is okay, how much coffee you can have, what you can add to coffee while fasting, and the possible risks of drinking coffee during a fast.

Can You Drink Coffee While Fasting?

The short answer is yes, anyone can have coffee during a fast but it needs to be calorie-free. A very typical example is black coffee with no milk or sugar.

Note: For those who aren’t coffee drinkers, other zero-calorie beverages that are okay during a fast include unsweetened tea, carbonated water, and zero-calorie electrolyte drinks.

How Much Coffee Can I Drink While Fasting?

Limit yourself to 400 milligrams a day, which is equivalent to 4 or 5 cups of coffee. According to the FDA, this amount isn’t generally associated with negative effects — although keep in mind that some people are more sensitive to caffeine than others, which necessitates adjusting your coffee intake based on personal tolerance (*).

What Can I Put in My Coffee That Won’t Break My Fast?

Fortunately, certain additions improve the taste of coffee if you find it too bitter. Fast-friendly coffee additives include:

Remember that adding ingredients with high calories can break a fast. This is why we advise keeping calories as low as possible if you decide to add a bit of flavor to your coffee. Less than a teaspoon of the spices mentioned above (cinnamon and nutmeg) isn’t enough to disrupt ketosis or raise your blood glucose.

Benefits of Drinking Coffee While Fasting 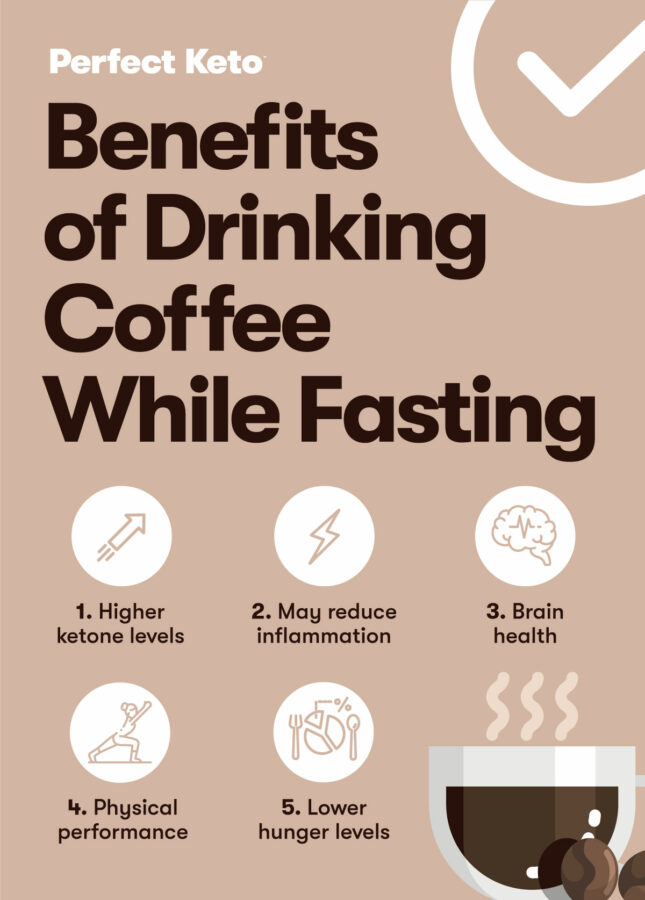 Drinking coffee and intermittent fasting offers many advantages, as you’ll learn in this section. From increasing ketone production to suppressing appetite for weight loss, both approaches complement each other.

Fasting is a quick and effective way to enter a metabolic state of ketosis, on top of reducing your carbohydrate intake.

A 2017 study shows that caffeine (in coffee) does the same. Ten healthy adults were given caffeine at doses of 2.5 and 5.0 milligrams per kilogram. The results showed that this increased ketone production in a dose-dependent manner (*).

You can skip coffee while fasting, but drinking calorie-free coffee during a fast may boost your ketone levels. This is helpful if you’re trying to get into ketosis after eating too many carbs or recovering from a holiday feast.

Inflammation is associated with many diseases, including heart disease, asthma, type 2 diabetes, and certain types of cancer (*). Periods of intermittent fasting reduce proinflammatory cytokines (*). When it comes to coffee, one study found that coffee consumption was linked to lower levels of inflammatory markers (*).

Many dietary approaches can improve brain health, and fasting is no exception (*).

It’s interesting to note that regular coffee intake has positive effects on the brain — improved mood, a decreased risk of depression, and sustained attention and concentration for long, demanding tasks (*).

However, keep in mind that too much caffeine — 1,000 milligrams or more — can trigger anxiety symptoms, such as a fast heart rate, nervousness, and jitteriness (*).

Coffee can be a trick for staying energized while fasting.

Caffeine, a stimulant that’s present in coffee, is one of the supplements used by athletes for sports performance. It acts in the central nervous system to decrease your perceived effort and pain (*).

For those who would like to exercise in a fasted state, this means you don’t have to quit your routine as long as you take coffee as a pre-workout beverage.

Pairing intermittent fasting and coffee will decrease your appetite. It’s no secret that hunger pangs can happen while fasting, but drinking coffee allows you to push through a fast.

One explanation is that coffee contains chlorogenic acids — a class of phenolic acids with high antioxidant activity. Aside from their beneficial effects on regulating blood glucose and preventing diabetes, they can help decrease hunger (*).

Types of Coffee to Avoid While Fasting

Anything that contains calories can technically break your fast. Except for plain black coffee, you need to avoid the following coffee drinks:

What Else Can I Drink Besides Coffee While Fasting?

Coffee and water aren’t the only beverages you can have during a fast. This is good news, especially for non-coffee drinkers. Like black coffee, the following options are calorie-free:

Are There Any Risks of Drinking Coffee During a Fast?

Despite the benefits of coffee, too much of it — whether or not you are fasting — can disrupt your sleep and cause other side effects, such as headaches, heart palpitations, and jitteriness. Not everyone experiences the side effects of coffee, but those who do tend to be more sensitive to caffeine or have consumed more than four cups of coffee.

Individuals with heightened caffeine sensitivity experience negative side effects even with small amounts of caffeine — for instance, a few sips of black coffee. If you are highly sensitive to coffee, the best solution is to reduce your intake of coffee while fasting (less than a cup) or completely avoid it.

Another possible risk is the occurrence of loose stools or diarrhea caused by too much coffee. A study noted that whether caffeinated or not, coffee increases the desire to defecate, especially in women (*).

Last but not least is headache. Fasting headaches can be a symptom of low blood sugar or hypoglycemia and they are common in those who are new to fasting and low-carbohydrate diets. They also happen during prolonged fasting (longer than 48 hours). In these situations, drinking lots of coffee can worsen headaches.

Should I Drink Coffee While Fasting?

Intermittent fasting and coffee work great together for increasing ketone levels, reducing inflammation, improving your attention and focus, and other benefits.

As long as you’re careful about what you’re adding to black coffee — if you don’t like it plain — coffee will not break your fast. Opt for zero-calorie sweeteners like stevia and monk fruit, or a pinch of the following: cinnamon, nutmeg, and salt (to neutralize the bitterness).

Stick with black coffee, which has virtually no calories. However, if you’re sensitive to coffee or choose to avoid it, you can have unsweetened tea, sparkling water, and zero-calorie electrolyte drinks.

U.S Food and Drug Administration. Spilling the Beans: How Much Caffeine is Too Much?.

Phillips M. Fasting as a Therapy in Neurological Disease. 2019 October 17

Nehlig A. Effects of coffee/caffeine on brain health and disease: What should I tell my patients?. 2015 December 16

Ayuso J et al. Effect of Caffeine Supplementation on Sports Performance Based on Differences Between Sexes: A Systematic Review. 2019 September 30

DeHond A et al. Effects of Coffee and Its Components on the Gastrointestinal Tract and the Brain–Gut Axis. 2020 December 29