Could something the ancient Incas used cure your modern day woes?

The answer may be a resounding YES! That is if the answer is wonder herb Cat’s Claw.

This herb of many names is both Peruvian and Amazonian in origin. Somehow it’s traced back to Peru and the Amazon Rainforest Basin. Cat magic? Today it continues to grow wild in the Amazon rainforest and tropical areas in both Central and South America.

It has been used to treat everything from allergies to inflammation to cancer. Its synergistic ability to boost your immune system, decrease inflammation and detox the body translate into improved cognitive function. All of which translates to looking, feeling and thinking better.

Recent studies are showing the Cat’s Claw’s historical medical claims are no joke.

By now you’re probably eager to know more about this wonder herb, how to use it and where you can get it. Let’s dig into see what ancient claims modern science backs up.

The Interesting History of Cat’s Claw

The history of Cat’s Claw goes way, way back – like all the way back to Incan Civilization.

Believed to be a panacea by many cultures throughout history, Cat’s Claw has been used as a treatment for generally boosting the immune system, pathogenic (viral, bacterial, fungal) infections, inflammation, birth control and all the way to cancer.

Scientific studies are backing up more and more of these historical claims. Research has shown that Cat’s Claw is pro-health because it’s an antioxidant, antiviral, antimutagenic and anti-inflammatory compound[*][*][*][*].

Thanks to research substantiating this herb’s medicinal properties, it is now being shown as an effect treatment or therapy for allergies, Alzheimer’s disease, arthritis, asthma, cancer, chronic fatigue syndrome, diabetes, diverticulitis, hemorrhoids, leaky bowel syndrome, peptic ulcers, colitis, gastritis, hemorrhoids, parasites,  ulcers, viral infections and many other conditions. All of which need to be discussed with your healthcare practitioner.

While the leaves, roots and bark can all be used, most commonly the vine’s bark is used in supplements because of its high concentration of phytonutrients. All parts of the plant are used to make pastes, water soluble extracts, tinctures, capsules/tablets and tea.

Breaking Down the Science Jargon

Antimutagenic – A compound that helps prevent mutations in the body such as cancer.

Antiviral – Akin to how antibiotics are compounds that kill bacteria, antiviral compounds are those that kill viruses. 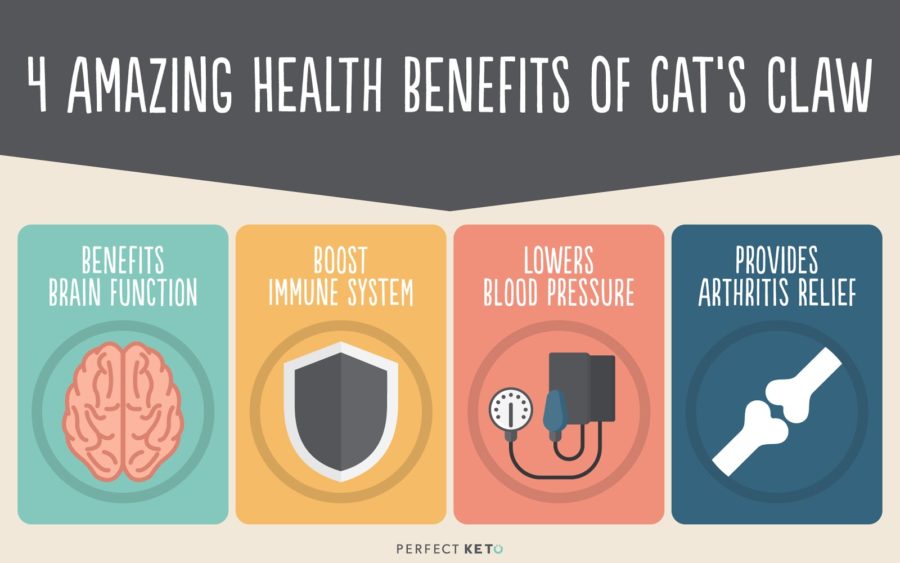 Now that you’ve made it through all that intense science talk, you may need to take a few calming breaths because the health benefits of Cat’s Claw are really exciting.

One of the first uses of Cat’s Claw was neurological benefits. The ancients noticed it helped with pain, coordination and cognitive function — translation, it helps you think good and focus.

The cognitive benefits of Cat’s Claw are the synergistic effect of several of its health benefits. Think of what are the culprits behind your brain not functioning at its optimal capacity — stress, fatigue, toxins, age-related deterioration, inflammation, injury, etc.

Cat’s Claw is a neuroprotectant (something that heals and protects neurons from damage) in that it repairs DNA[*]. Not to cause further stress, but extreme bouts of stress and/or chronic stress can cause DNA damage.

Phytochemicals in Cat’s Claw have antioxidant properties that help repair this damage, as well as the damage left behind by other conditions. While those compounds get to work on DNA repair, other compounds from the same plant get to work on reducing inflammation and detoxing the body, inclusive of the brain. This, in turn, helps with memory, learning and focus, which is cognitive function.

In animal studies, Cat’s Claw has been found to help with amnesia and protect against stroke-related memory impairment[*][*].

This is why we choose to put Cat’s Claw in our Perfect Keto Nootropic. Every ingredient in our nootropic is based on science back research to keep your brain functioning at max capacity and to keep you keto.

Alkaloids in Cat’s Claw boost your immune function by increasing the rate at which white blood cells (WBCs) are created and their activity[*]. WBCs are a major component of your immune system. They find and engulf pathogens — viruses, bacteria, fungi and foreign bodies that make you sick. This process is known as phagocytosis.

The more white blood cells around to complete phagocytosis and the higher the rate they do so, the sooner you feel better. Better yet, if they’re already in place, you’ll fend off an incoming pathogen. That’s the immune system functioning at its finest.

Inflammation is the primary culprit behind nearly every known disease state. One of the most ancient uses for Cat’s Claw is the reduction of inflammation and that’s how it helps with your overall immune system. There are several phytochemicals in Cat’s Claw that fight inflammation[*].

Cat’s Claw has been used in Traditional Chinese Medicine (TCM) for over 2000 years to treat many health problems — the same health problems that Western Medicine is just now beginning to use the herb for. In TCM the herb is called Gou Teng.

Research is now showing that Cat’s Claw supplementation may be an effective treatment for not only high blood pressure but also for the prevention of heart attacks at strokes. That’s because of alkaloids rhynchophylline, uncaria rhynchophylla and hirsutine[*].

Rhynchophylline is a cardiovascular powerhouse that lowers blood pressure and prevents blood clots by preventing plaque formation before it can even become a clot.

Hirustine keeps your blood pressure under control. It’s a calcium channel blocker that keeps calcium in your bones instead of depositing in your arteries.

When calcium deposits in your arteries instead of your bones, you get weak bones and stiff arteries that your heart has to pump harder to get blood through. Long term this translates to osteoporosis and heart disease.

The Journal Of Rheumatology found that pentacyclic oxindole alkaloids in Cat’s Claw provided relief for rheumatoid arthritis (RA) patients with little to no side effects[*]. Because of the promise Cat’s Claw has shown with RA clinical trials are now underway to see what the herb can do with other autoimmune diseases like lupus.

The alkaloid compounds in Cat’s Claw called Uncaria tomentosa and Uncaria guianensis have both antioxidant and anti-inflammatory effects that make the herb an effective modulator of both osteoarthritis and RA[*].

This is on top of Cat’s Claw’s other health benefits such as boosting immune system, pain reduction and detoxification that can greatly improve the signs and symptoms associated with arthritis, as well as slow the damage caused by the condition.

Cat’s Claw extract’s anti-inflammatory properties are so pronounced that it is being looked at to help with the inflammation associated with multiple sclerosis, however, no direct studies have been completed[*].

How to Buy and Store Cat’s Claw

Just because Cat’s Claw has been used for over 2000 years, that doesn’t mean what’s in your bottle is backed by that much research. There are a lot of dietary supplements out there and it’s hard to choose which ones are safe and effective. That’s why we’ve created an entire line so you can stick with a brand you know and trust based on quality and results.

Very few Cat’s Claws side effects have been reported when the herb is consumed in small doses[*][*]. That said it’s recommended that you discuss herbal supplementation with your healthcare provider, especially one who practices traditional medicine and never take an internet article in lieu of professional medical advice.

It is not advised women who are pregnant or could be pregnant take Cat’s Claw, as it may have detrimental effects on the pregnancy.

Do not take Cat’s Claw if you are on any blood thinning medications or have a blood clotting disorder. Cat’s claw is not recommended for individuals with hypotension, very low blood pressure, because of its blood pressure lowering properties. The blood thinning properties of Cat’s Claw may also prove problematic for individuals with stomach ulcers or any ulceration along the digestive tract.

Supplements made Cat’s Claw bark contain large amounts of tannins (a type of phytochemical) and can cause stomach issues if taken in large doses. This is related to the detoxification properties of tannins and the side effects can be reduced or eliminated by taking significantly smaller doses and incrementally increasing under the supervision of a healthcare practitioner.

Do not take Cat’s Claw if you have an upcoming surgery and report to your healthcare provider the last time you took the herb. Because Cat’s Claw is so effective at boosting the immune system it is not recommended for individuals on immunosuppressant medications.

Cat’s Claw Is a Must-Have for Your Health

Scientific research is backing up what Eastern Medicine practitioners have known for thousands of years – Cat’s Claw is the health-boosting bomb dot com. With health benefits ranging from improving your brain function to lowering your blood pressure all the way to reducing pain and fending off cancer, it’s safe to say that this herb is worth looking into.

We’ve blended it into our Perfect Keto Nootropic to boost your cognitive function, as well as your immune system.