You might not have known it, but there are multiple types of cinnamon out there. Cassia and Ceylon are the most common for cooking, and you might be surprised to learn that Ceylon cinnamon benefits are particularly impressive.

If you’re like most people, your jar of cinnamon keeps its place in your spice rack year after year. It might make its grand entrance around the holidays or for an occasional cinnamon roll recipe. Still, other than a few sprinkles on occasion, cinnamon likely isn’t a regular part of your health routine.

Spices offer some fantastic health benefits. You may not see it posted across the evening news, but they’re full of compounds and nutrients that help your body run smoothly.

So, is it time to pull that cinnamon off the rack? Read more to find out what this warming spice has to offer.

What Is Ceylon Cinnamon?

Cinnamon is a common spice used for thousands of years in different cultures around the world. Cinnamon has more going for it than its warm, invigorating taste — this spice also has a variety of wide-reaching health benefits.

As a traditional medicine, cinnamon has been used to treat ailments like bronchitis, digestive upset, and gynecological issues[*][*].

What you may not know is that there are several different types of cinnamon.

Ceylon cinnamon, also known as true cinnamon (or real cinnamon), comes from the bark of a tropical cinnamon tree grown primarily in Sri Lanka but also found in southern India and Madagascar.

Cinnamon sticks come from the dried inner bark of the tree. In the process of drying, the cinnamon curls up to create the quill-like structure of a cinnamon stick. Ground cinnamon comes from grinding up the sticks into a fine powder.

Another more common variety of cinnamon is cassia cinnamon (Cinnamomum cassia), which is most likely the cinnamon you have stocked in your spice cabinet. It’s much more widely distributed, especially in the United States.

Both types look the same and taste the same to most people. But there’s a difference between these two types of cinnamon, particularly when it comes to your health.

How Is Ceylon Cinnamon Different from Cassia Cinnamon?

Ceylon and cassia cinnamon have a few distinct differences.

While it shares a sweet and spicy taste with Ceylon cinnamon, the health benefits differ quite a bit between the two varieties of cinnamon.

The main health benefit of cassia cinnamon is that it helps with blood sugar control[*]. You can also use it as a mosquito repellant[*].

But other than that, there aren’t many reasons to consume cassia cinnamon. Cassia cinnamon also contains a compound called coumarin, which is potentially toxic in high levels[*][*].

Ceylon cinnamon, on the other hand, is great for your health in all kinds of ways. It regulates blood sugar, it’s an antioxidant, it boosts brain function, and it’s an anti-inflammatory agent[*][*].

What Are the Active Compounds in Ceylon Cinnamon?

The main medicinal compound in Ceylon cinnamon is cinnamaldehyde. Cinnamaldehyde makes up 60-80% of the volatile oils in cinnamon. It’s what gives cinnamon its sweet and spicy scent.

Ceylon cinnamon not only tastes great, but it’s also full of anti-inflammatory properties that can help with digestion. It helps with blood sugar regulation, blood pressure, brain health, and offers antimicrobial properties too. Ceylon cinnamon is also free from the potential side effects associated with large amounts of cassia cinnamon. 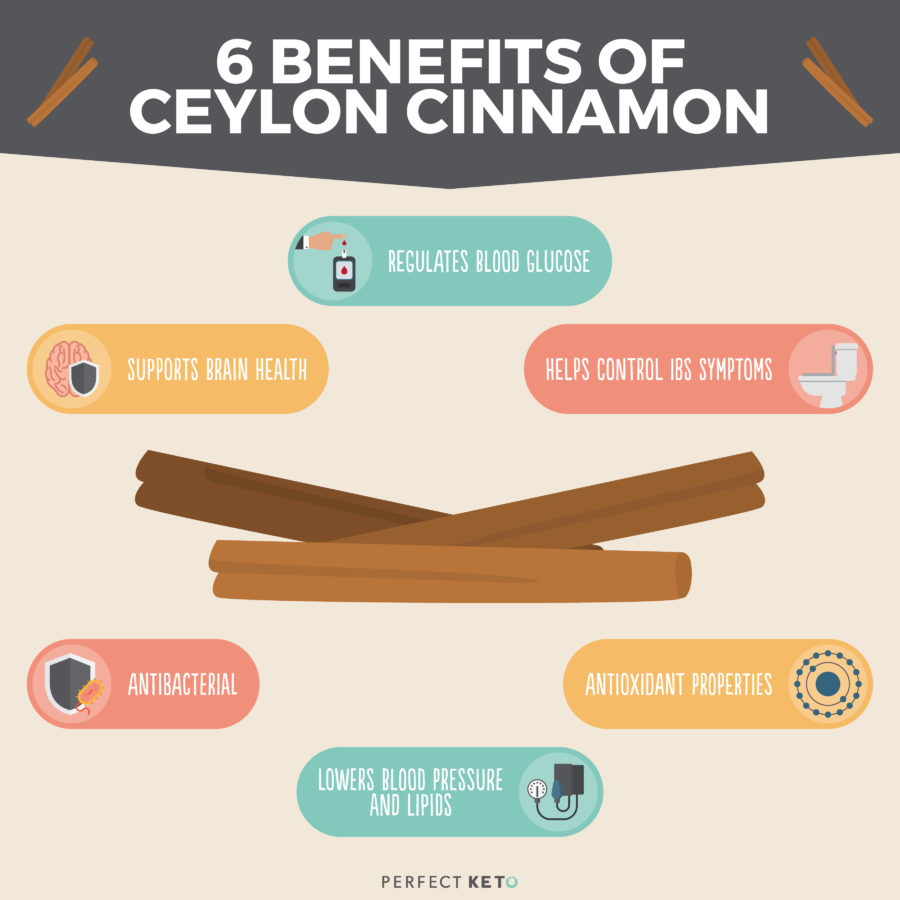 Ceylon cinnamon can help you balance your blood sugar levels.

Ideally, you want to keep your blood sugar low (but not too low) and stable. To do this, your cells need to be sensitive to the hormone insulin. When your blood sugar and insulin get out of balance, you’re at risk for metabolic disorders, particularly diabetes.

If you’re struggling with irritable bowel syndrome (IBS), it’s common to go back and forth between constipation and diarrhea.

Being very sensitive and not knowing which direction things are headed can cause a lot of anxiety. Ceylon cinnamon can help regulate both sides.

Ceylon cinnamon, as part of an herbal formula, relieved constipation and reduced pain and bloating in people with IBS. At the same time, the tannins in cinnamon reduced diarrhea[*].

Ceylon cinnamon offers antioxidants that protect you from free radical damage and inflammation[*].

First, it sweeps through your system, binding to existing free radicals and deactivating them.

And second, it terminates the chain reaction that creates free radicals in the first place[*]. The result is decreased cellular damage and less inflammation.

Heart disease is the leading cause of mortality in the U.S., accounting for a troubling 25% of deaths each year[*].

Blood pressure and blood lipids are two critical factors in heart disease. You want to maintain an even blood pressure and a balance of lipids (fat) in your blood to prevent putting too much stress on your heart.

Ceylon cinnamon has been shown to reduce high blood pressure in rats[*]. It also lowers blood lipids, which protects against artery-blocking plaques[*].

Ceylon cinnamon is also an antibacterial. Cinnamaldehyde, the essential oil component of cinnamon that gives it that tantalizing smell, also fights off a wide range of harmful bacteria[*]. Cinnamaldehyde disrupts the membrane of the bacteria cells, causing them to explode[*].

It seems like everyone is looking for a way to boost brain function these days. Whether you’re aiming to prevent neurological disease, or just trying to make your workday flow a little better, Ceylon cinnamon may be worth a try.

How to Use Ceylon Cinnamon

Most cinnamon you see on the shelves will be the cassia version, so if it doesn’t explicitly say “Ceylon,” assume it’s cassia. If your local shops don’t carry Ceylon, then you can find it online.

You can use Ceylon cinnamon just like you would any other cinnamon in culinary dishes. Sprinkle it on roasted veggies for a warming flavor, add it to a chia seed pudding, or make some keto cinnamon rolls or a cinnamon dolce latte breakfast smoothie.

The scientific names for Ceylon cinnamon are Cinnamomum zeylanicum and Cinnamomum verum.

Ceylon cinnamon dosage varies from around 500 mg to 1200 mg, but there aren’t any set standards.

Try different doses and see how you feel. There isn’t much risk of taking higher doses of Ceylon cinnamon. Just make sure you aren’t taking high doses of cassia. The coumarin in cassia cinnamon can cause liver damage.

Check with your doctor before starting any new supplement, no matter how harmless it sounds.

If you’re currently taking diabetes medication or blood pressure medication, talk with your doctor about supplementing with cinnamon. Its insulin-like effects and ability to lower blood sugar could send you into hypoglycemia or super-low blood pressure.

For most people, though, Ceylon cinnamon is perfectly safe. It can be an excellent supplement for IBS, high blood sugar, high blood pressure, inflammation, and more. Give it a try and see how you feel.

Ceylon cinnamon is a fantastic spice to add to your keto meal plan. Rich in antioxidants and good for your blood sugar, heart, and brain — this unassuming spice has it all.

The only trick is to make sure you’re buying the correct type of cinnamon. If you’re looking for the Ceylon cinnamon benefits described in this article, you want to make sure you stick to the Ceylon variety, as opposed to cassia, which can be found much more abundantly in U.S. grocery stores.

Due to its powerful role in regulating blood sugar, you should consult with your doctor before using this spice if you are diabetic or prediabetic — it may seem innocent enough, but nature has some powerful healing effects.

One thought on “6 Ways Ceylon Cinnamon Benefits Your Health”