One of the most controversial topics surrounding the ketogenic diet is its safety as it relates to hormones. Some say keto is amazing for regulating hormones and others say the opposite. So, what should you believe? Well, let’s start with the basics.

Hormones are chemical messengers produced by endocrine glands that work together to regulate different processes in the body. The reality is, our bodies are very complex, and every process that occurs is to some degree regulated and influenced by a wide array of individual circumstances that are continuously changing. That being said, hormonal imbalance is extremely prevalent in our society and can contribute to many different health issues. Some of these issues that will be addressed in this article include: 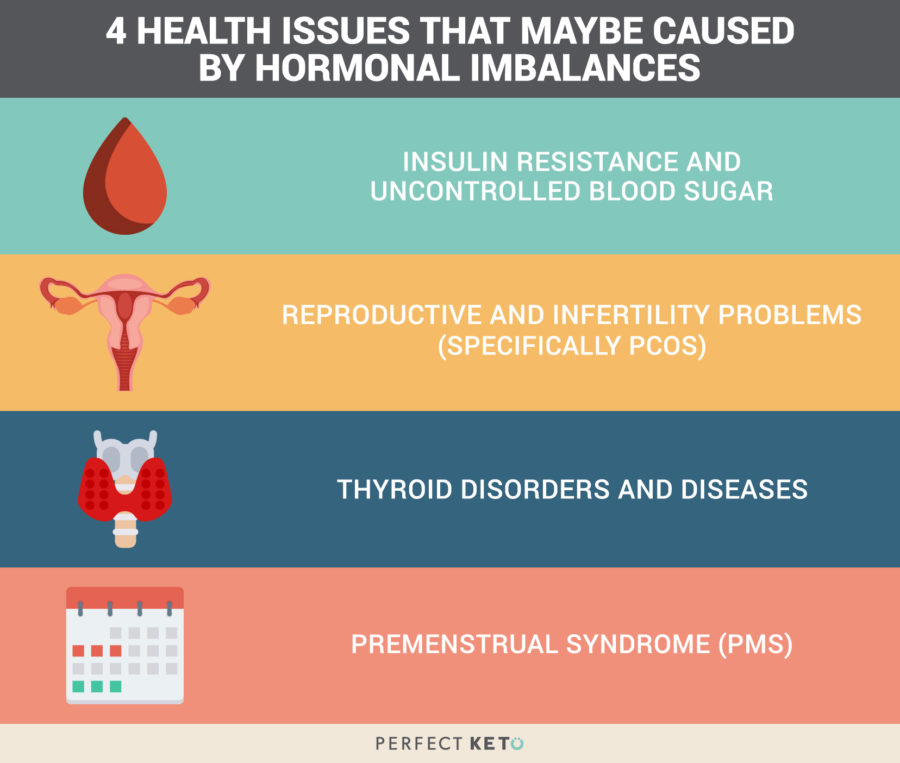 So, what does this have to do with keto?

Ever read anything about the ketogenic diet or listen to a related podcast? You probably noticed that many of the above health issues were discussed.

In this article, we’ll consider some of the research and mechanisms of why being in a state of ketosis can help alleviate many of the above-mentioned health problems that may be a result (or cause) of hormonal imbalances.

Many of the health-related issues we see today can be linked to elevations of the hormone insulin. In simple terms, insulin is produced by your pancreas in response to carbohydrate consumption. Basically, when you eat carbohydrates/sugar, it causes a glucose response which sends a signal to your body to release insulin and transport glucose into the cells.

This is typically a normal response for the body; however, in the standard American diet (excessive amount of carb/sugar intake), it happens way too much and can cause excessive blood sugar spikes and lead to insulin resistance. Insulin resistance is very common nowadays and unfortunately, many people are unaware that they have it until they develop serious chronic health issues, such as type 2 diabetes [*]. The best way to treat insulin resistance is to get your blood sugar/insulin levels under control through proper nutrition and lifestyle choices.

Additionally, cortisol is another popular hormone that is involved in this process. Cortisol is a hormone released by your adrenal glands whenever your body is stressed. One stress in our body that we don’t necessarily feel is the glucose response mentioned above that occurs when we eat carbohydrates. When your blood sugar rises too quickly and then drops rapidly, it causes a stress response to occur in your body and leads to the release of cortisol.

The ketogenic diet has been shown to regulate blood sugar response and reduce the stress that occurs from blood sugar spikes and dips. This is important because it allows an overall lower cortisol release and takes the stress off your adrenal glands, so they can function properly.

Ultimately, ketogenic foods are a lot less taxing on the body compared to carbohydrate foods and can in turn aid in improved regulation of cortisol metabolism and thus contribute to hormonal balance [*]

PCOS (Polycystic Ovary Syndrome) occurs from an imbalance of reproductive hormones and is the most common cause of infertility in women. More than half of the women diagnosed with PCOS are overweight or obese[*] and have symptoms associated with insulin resistance, elevated blood glucose, and metabolic syndrome[*].

Presently, there is no cure for PCOS; however, because it is strongly associated with impaired glucose metabolism, implementation of a ketogenic diet is becoming a very popular treatment method. In fact, research shows that women who were diagnosed with PCOS and put on a ketogenic diet had remarkable improvements in reproductive hormones and insulin levels, with some even becoming pregnant after having previous fertility issues[*].

Additionally, there is a ton of anecdotal research supporting the positive effects of the ketogenic diet in women suffering from PCOS.

Therefore, keto has a very high potential to contribute to improved pregnancy outcomes, alleviate symptoms of PCOS, and contribute to an overall increase in quality of life.

Another big player involved in hormone regulation is the thyroid gland. When the thyroid is out of whack it can lead to a whole host of different issues from disorders such as hypothyroidism to autoimmune diseases like Hashimoto’s or Grave’s disease. Many critics of the ketogenic diet tend to think that it can negatively affect thyroid function, when in fact it may actually be the opposite.

For example, when someone has an autoimmune disease, instead of trying to heal the gland or the organ involved (in this case the thyroid), you need to work on healing the immune system. It’s not the thyroid’s fault in this case – it’s your immune system becoming overactive and thinking that the thyroid is an invader. Guess what – ketones are amazing at regulating and healing your immune system which can in turn translate to healing other organs that may be involved in hormonal imbalances. [*][*]

Additionally, some critics of the ketogenic diet claim that it can cause hypothyroidism. This is because there is evidence that shows that T3 (the active thyroid hormone) decreases when switching to a ketogenic diet.

However, this is not necessarily a bad thing – it’s often because your body is working so much more efficiently in ketosis. In fact, lower T3 has been shown to spare muscle in conditions of weight and fat loss – one of the many great outcomes that occurs from following a ketogenic diet[*][*].

Check out this article for more information related to keto and the thyroid.

PMS is something that affects almost every human being on the planet. Yes, even men. Women have to personally deal with PMS while men have to deal with the women dealing with the PMS… wow that’s a mouthful – but it’s reality. PMS has a wide variety of symptoms including mood swings, depression, irritability, food cravings, fatigue, acne, headaches, brain fog – the list goes on and on.

But what if there was something proven to help mitigate these symptoms and spare this dreaded monthly pisser offer? Hmm what could that be…Yep, you guessed it…KETO. The ketogenic diet has been scientifically proven to have a positive effect on many of the PMS related symptoms mentioned above[*][*][*][*][*][*][*].

Don’t believe me? Take the plunge and try it yourself using this start up guide to the ketogenic diet.

One more thing…This is important to understand…

In order to produce healthy hormones to allow your body to function at it’s most optimal rate, you have to consume high quality fats and proteins. This is because the building blocks that make up hormones include amino acids (protein), lipids (fat), and cholesterol (a precursor of almost every single hormone in your body). 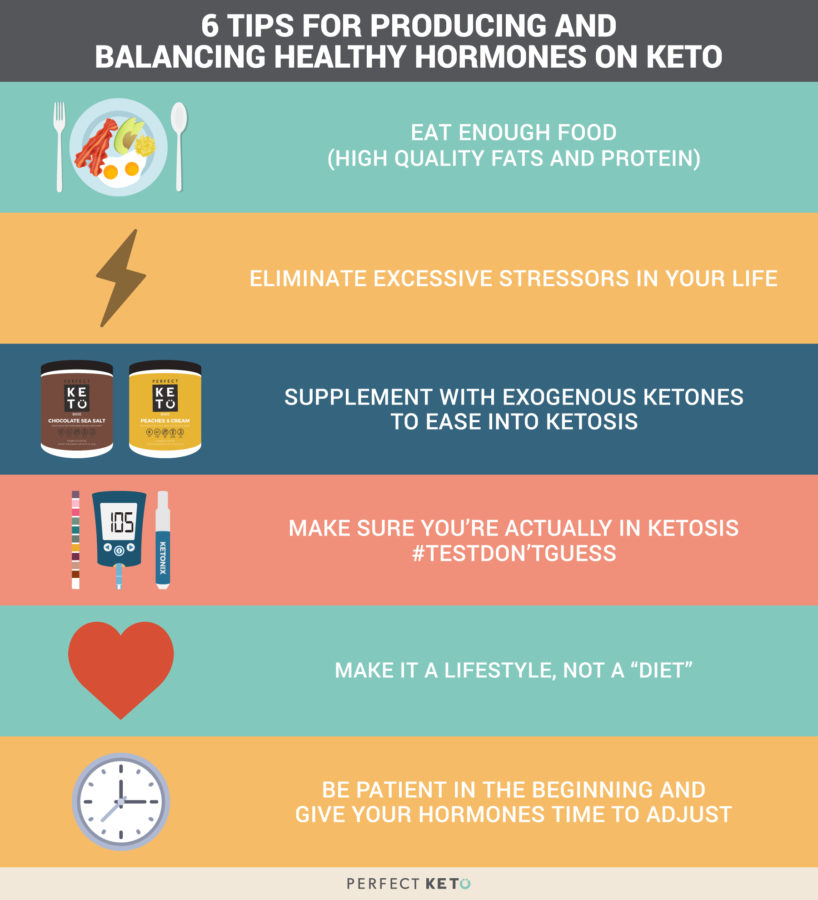 As mentioned earlier, our bodies are very individualized and unique to our specific needs. When first starting a ketogenic diet, you may notice different hormonal changes that occur as a result of your body switching and adjusting to a new (and more efficient) fuel source – fat. This is completely normal and necessary. It’s going to take time for your hormones to regulate and for some it could even take months. If you’re patient, positive, and implement the tips listed above, you’ll be on the right track to allowing keto to balance your body and lead to ultimate healing!

2 thoughts on “Hormones and the Ketogenic Diet”