Is Red Meat Good For You Now? - Perfect Keto

In 2018, the World Health Organization (WHO) classified red meat as a “probable carcinogen,” meaning red meat consumption is likely to increase your risk of cancer[*].

Similarly, the American Heart Association has spent the last several decades suggesting you decrease you cut out red meat to reduce your risk of heart disease.

Now, in late 2019, red meat is in the news again — but this time, the results are more positive.

What the Science Is Saying About Red Meat Now

Based on their findings, the NutriRECS panel suggested that “adults continue current unprocessed red meat consumption.”

Should meat eaters rejoice at this news? Or should they listen to the WHO’s report from last year and decrease their red meat intake? More importantly, why do nutrition recommendations flip-flop so often, and in such a small amount of time?

Let’s take a look at why nutrition research is so fickle, why meat quality matters when it comes to health, and how to tell what diet is best for you.

Nutrition Research Is Difficult To Do Well

First off, the back-and-forth on nutritional recommendations is nobody’s fault. Nutrition research is notoriously difficult to do well.

Let’s say you take 100 people who eat red meat, follow them for 10 years, and discover that 35 of them died from heart disease.

You also follow 100 vegans for that 10-year period. At the end, only 10 of them have died from heart disease.

That’s a huge difference between the groups, and it’s tempting to conclude that red meat causes heart disease. But how do you know it was the red meat?

Correlation is not causation — in other words, just because the meat eaters had more heart disease, it doesn’t mean red meat caused that heart disease. It could have been a million other things.

All those things are considered risk factors for heart disease. So how do you control for them to make sure you’re truly studying red meat’s impact on heart health?

Ideally, you’d get two groups of people, control their diets and lifestyles completely over the course of 10 years, then look at their health. But that’s both unreasonable and unethical.

This is one of the biggest issues with nutrition science in general. It’s so hard to control, and it’s conducted over such a long period of time, that researchers have to rely on low-quality evidence from correlational studies. It’s the best they can do, but it isn’t very useful — and it helps explain why nutrition guidelines flip-flop so often.

Diet is complicated, and while it’s tempting to reduce health down to single foods (“red meat causes cancer”), there’s a lot more nuance involved in nutrition. Is that red meat coming from a factory-farmed burger served alongside fries and a milkshake? Or is it an organic, grass-fed steak eaten with a big side of vegetables?

Large nutritional reviews look at big-picture results from dozens (sometimes hundreds) of studies, and they often miss details that end up being quite important. 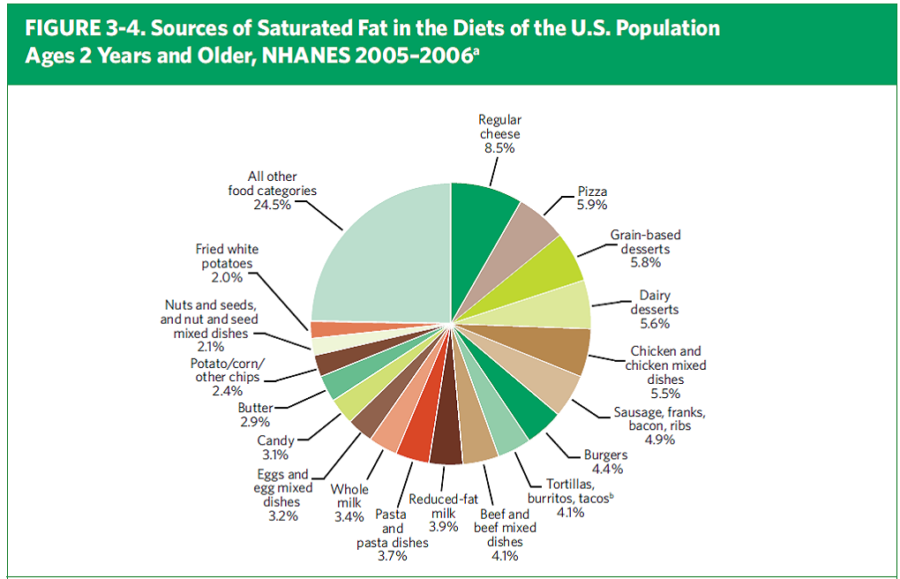 The takeaway here is that Americans eat a lot of saturated fat, but most of it comes from sugary desserts, refined carbs cooked in fat, candy, chips, and so on.

That context is very important.

A recent study found that overall, saturated fat linked to health decline — but within that data set, people who ate a diet that was high in saturated fat (much of it from unprocessed meat) and low in carbs actually saw improvements in their health[*].

Nutrition is complicated, and it’s hard to pull single foods out and say they’re unhealthy. You’re better off looking at diet as a whole.

For example, grass-fed beef has several times more omega-3 fatty acids than grain-fed beef does, as well as significantly more vitamins, minerals, and antioxidants[*]. There are more health benefits to grass-fed meat, which is why it’s what we recommend at Perfect Keto.

Cooking meat makes a difference as well. If you’re grilling meat over high temperatures and it gets a deep char on the outside, you’ll produce more cancer-causing compounds than you would if you seared it for a shorter amount of time, braised it, put it in a sous-vide, etc.

Is Red Meat Bad, or is it Part of a Healthy Diet?

We believe that red meat is great for you, provided you eat it as part of a healthy diet. We recommend high-quality, grass-fed meat, plenty of veggies, and minimal sugar and refined carbs.

And ultimately, regardless of what new studies say, your diet is unique to you. Experiment and find something that helps you hit your goals, whatever they are — weight loss, more energy, better heart health, and so on.

Track your health outcomes and let personal results be your guide. While it requires some trial and error (and it isn’t as satisfying as finding  definitive, one-size-fits-all answer), it’s more precise than following the latest change in dietary advice.

If you aren’t sure where to start, keto is a great first step that works well for a lot of people. Give it a try; you’ll know within a month whether or not it’s good for you.