Is Honey Keto? Your Guide to Honey on the Keto Diet

It offers lots of health benefits, but is honey keto or low-carb friendly? And what is honey, anyway?

Honey is made from those busy little bees you probably shriek away from anytime one gets near. These small insects may seem like a summertime annoyance, but they’re one of the most valuable creatures on the planet. Bees pollinate plants, helping to fertilize over 30% of the world’s crops and 90% of wild plants[*].

Of all the foods you have bees to thank for, honey is the most widely known. Raw honey contains a host of nutritional benefits. It’s packed with antioxidants and is a healthier alternative to sugar.

But is honey keto or suitable for a low-carb diet? And how many carbs are in honey? Find out with this guide to honey on the keto diet.

Honey has existed for 150 million years, with the first records of beekeeping dating back to 7,000 BC[*].

Raw honey is a thick, golden liquid. It’s a pure, unfiltered, natural sweetener produced by bees from the nectar of certain flowers.

Nectar is a sugary sweet juice that the bee takes from the flower and stores in its stomach. Bees have two stomachs — one for eating and one to carry nectar back to the hive[*].

How Is Honey Different From White Sugar?

When it comes to the comparison of raw honey to cane sugar, there are several factors to consider. Both contain two sugar molecules: glucose and fructose.

Honey and sugar are digested differently. The honey bee adds a special enzyme to raw honey. This breaks down the two sugar molecules so it can be immediately used for energy[*].

With table sugar, your body does the work — it must break apart the sugar molecules using enzymes before you can store them as energy.

How Many Calories Are in Honey?

Is Honey Keto or Low-Carb?

Unfortunately, honey is not a keto-friendly sweetener.

One tablespoon of raw honey contains 17 grams of net carbs — 16 of which come from sugar. It contains zero grams of fat, no dietary fiber, and only a tenth of a gram of protein. As you probably guessed from its nutrition facts, honey is a high-carb food and holds no place on the keto diet.

Will Honey Kick You Out of Ketosis?

Remember, ketosis is a metabolic state. The keto diet provides guidelines to help you enter ketosis. The average person can consume 25-50 grams of total carbs per day and remain in ketosis. Active people and endurance athletes report they can eat up to 100 grams of carbohydrates per day and stay in ketosis.

Technically, you could eat a high-carb food like honey and stay in ketosis. However, eating honey in large quantities will prevent you from entering ketosis and reverse your progress. That said, eating one tablespoon (one serving size) of honey probably won’t hinder your results.

Here are a few times when a small amount of honey is acceptable:

If you’re able to stay in a state of ketosis with a higher carb intake, you may find honey to be a perfectly acceptable part of your diet — as long as you consume it in moderation. For keto diet beginners, it may be best to hold off.

There are key health benefits you gain when you replace traditional table sugar with raw honey. These can include weight loss, improved energy, an increase in antioxidants found and distributed throughout the body, a restful night’s sleep, wound healing, antibacterial effects, and lower chances of developing diabetes[*][*][*][*][*].

Low-Carb Sweeteners to Use Instead of Honey

Is honey keto? No, it isn’t keto-friendly. If you want to stay in ketosis, it’s best to find other ways to sweeten your food or beverages.

Choose one of these keto-friendly sweeteners instead of honey: 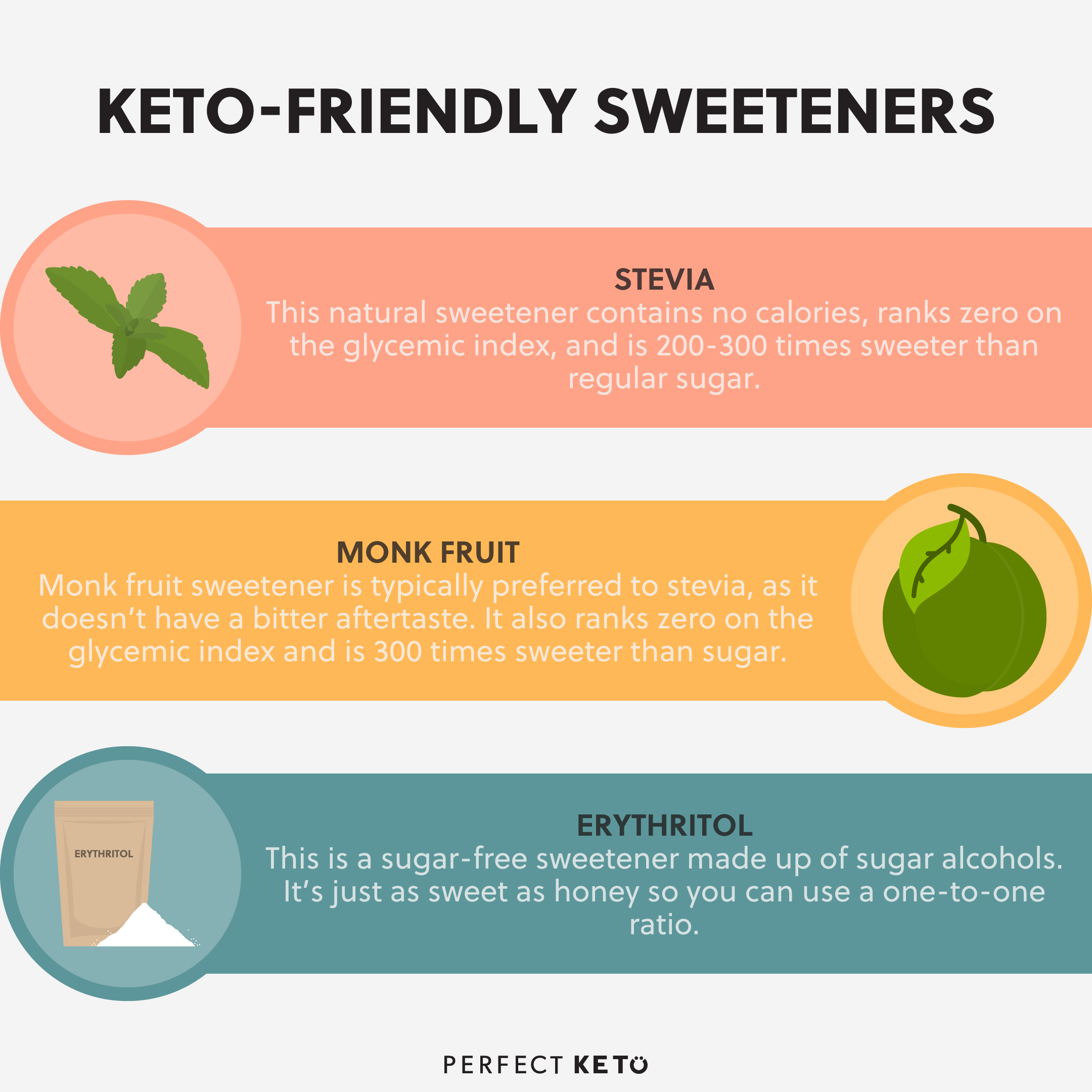 It might be tempting to replace honey with artificial sweeteners since they all claim to have zero calories and are sugar-free. But some sweeteners could cause negative health effects.

Avoid artificial sweeteners like aspartame or Splenda. Even though they are free from sugar, they’re not good for your overall health. Splenda has been found to raise blood sugar and insulin[*].

Studies show aspartame and saccharin could disrupt healthy gut bacteria[*]. There’s also a link between aspartame and cancer, so it’s best to stay away from it[*].

Xylitol is a sugar-free sweetener, but it’s not recommended to use all the time. One of the most signifcant drawbacks to it is that it could lead to difficulty losing weight[*].

Is Honey Keto? No, It’s Not

While raw honey beats most traditional sweeteners in terms of overall health benefits, it’s too high in carbohydrates and natural sugars to be a safe bet for the ketogenic diet. The only way to make raw honey a part of your diet on a low-carb or keto diet is if you are:

Since honey is not low-carb or keto-friendly, you’re better off choosing stevia or monk fruit as a keto-friendly sweetener.