The ketogenic diet has worked for a lot of people.

It’s true: the data on keto for weight loss, energy, inflammation reduction, and cognitive health is now overwhelming[*][*][*]. This data comes from both scientific literature and the personal accounts of countless keto dieters.

It makes you wonder: with all these health benefits, should everyone go keto?

As with all things nutrition, it’s not quite that simple.

Read on for the science behind the keto diet and learn just how to determine if it’s the right diet for you.

How to Decide if Keto is Right For You

The first step to making any diet or lifestyle change is to make a specific goal. Goals will help keep you accountable and help you understand the “why” behind the new habits you’re making.

For instance, you might set the goal of losing 20 pounds over the next six months. The reason behind the goal?

You can even go one layer deeper. Why reduce heart disease risk? So you can have more time with your family. This deep-dive approach to goal-setting can offer powerful motivation.

With your goal in place, the implementation phase begins. This is the hard part, but certain tools make it much easier.

The ketogenic diet is one way. Here are some specific reasons the keto diet might be the right choice for you.

The ketogenic diet is probably best known for its effects on fat loss.

In one randomized controlled trial, healthy women lost more weight on a very low-carb diet (keto) than on a calorie-restricted low-fat diet[*].

That means that the keto women ate more calories and lost more weight than their calorie-deprived counterparts. No sacrifice, more benefits.

But keto is more than just a weight-loss diet.

Whether you want to improve cognition or stave off age-related neurodegeneration, having plenty of ketones in your blood can help.

What about plenty of glucose from carbohydrates? Not so much.

In one recent study, researchers found that a sugary drink decreased human performance (compared to placebo) on a set of cognitive tasks[*].

Because of this, and because keto boosts mitochondrial function in brain cells, researchers are exploring ketosis as a potential Alzheimer’s therapy[*].

If you’re an athlete, especially an endurance athlete, training in a state of ketosis can give you an edge over the competition. Believe it or not, experts have known this since 1983.

Keto puts your body in endurance mode — so when you exercise in a state of ketosis, you burn fat instead of glucose.

This enhanced fat burning helps preserve your muscle glycogen (stored glucose) for when you really need it — say, at the end of a two-hour cycling session.

Simply put: on keto, you can go harder for longer.

Chronic, systemic inflammation — a low-level immune response in the absence of specific pathology — underlies every chronic disease[*]. Because of this, minimizing inflammation is the key to living a long, healthy life.

There are at least four ways that keto helps lowers inflammation: 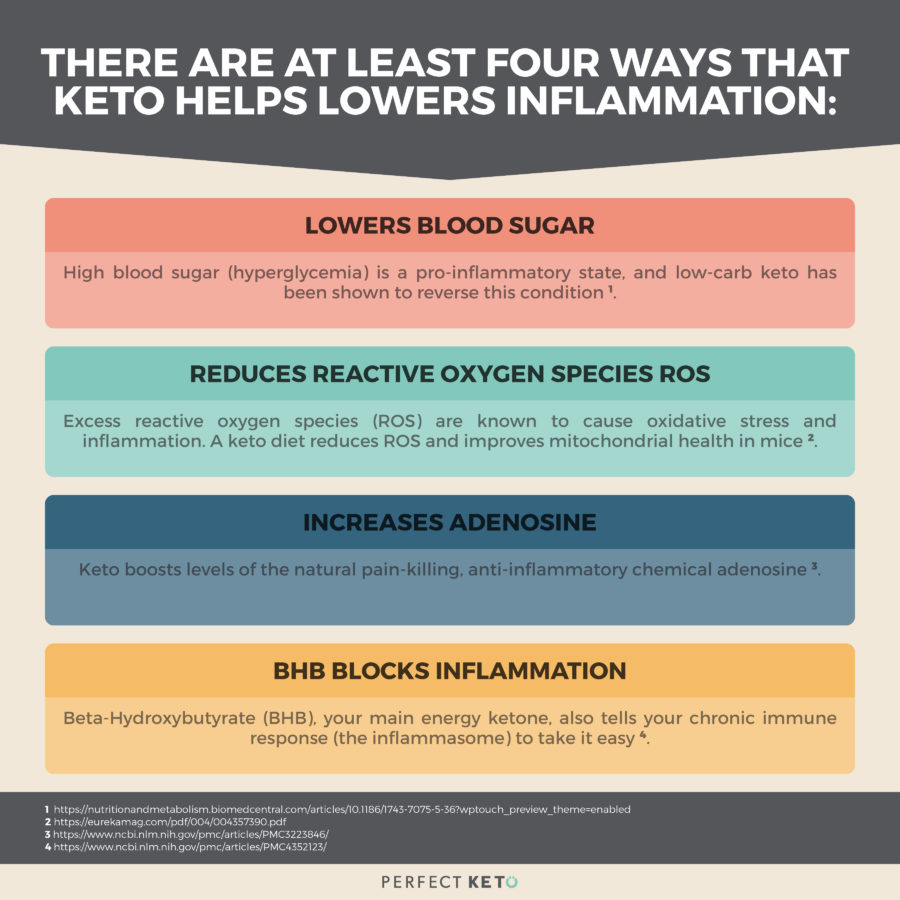 #5: Ketosis for Other Conditions

Besides the four conditions listed above, the ketogenic diet may also:

Researchers are also exploring ketosis as a therapy for certain cancers[*], although there’s not a lot of science behind that yet.

Back now to the central question: is there anyone who shouldn’t go keto?

Who Should Not Try the Keto Diet?

Keto is not a one-size-fits-all diet, nor is it without potential drawbacks and side effects.

Temporary cases of keto flu-related brain fog notwithstanding, here are some groups that may want to exercise caution with the ketogenic diet:

You learned earlier that keto improves athletic performance. This is only the case, however, after sufficient fat-adaptation time has passed.

So, if you’ve got a big race next week, you won’t want to start keto today.

Other athletes claim that they need some strategic carbs even after they’re fat adapted. If that sounds like you, you might want to experiment with a cyclical keto diet or a targeted keto diet.

In one well-designed study, a keto diet not only improved metabolic markers in diabetics — it also allowed many of them to drop their meds[*].

A more recent study showed a similar win for keto over diabetes, though the authors were careful to take precautions[*].

“To reduce the risk of hypoglycemia,” they write, “we excluded participants who were taking any diabetes medication other than metformin.”

The takeaway? Keto helps reverse diabetes, but consult your medical professional to avoid potential complications with your medications.

There isn’t much data on ketosis and human pregnancy. It is known, however, that ketones can pass freely through the human placenta, which may affect the development of the fetus[*]. This is usually the result of gestational diabetes linked to ketonemia — an abnormally high concentration of ketones in the blood.

In any case, a keto diet isn’t recommended during pregnancy. And if you’re on a keto diet for medical reasons and you get pregnant, definitely get your doctor involved in your diet decisions.

Similarly, there’s very little data on the keto diet and nursing mothers. Talk to your doctor if you’re nursing and are curious about the ketogenic diet.

Special cases aside, how can you determine if keto works for you? Simple. Try it out.

There are, of course, better and worse ways of going keto — and below are the basics to get you started. (Check out this free Keto Kickstart Guide for the full treatment).

If you do everything right and keto still doesn’t work for you, then it’s probably not your optimal long term diet.

Every person has different genes, preferences, lifestyles, and tastes — and the ketogenic diet might not sync with yours.

The Right Diet for Every Human

Maybe you’ve tried the keto diet. Maybe it worked for you. Maybe it didn’t.

Regardless, it’s important to stick to real, whole foods.

This means shopping the periphery of the supermarket — and avoiding aisles stocked with cookies, crackers, sodas, vegetable oils, and other junk.

It means cooking your own food instead of hitting a fast food joint. And it means getting your vitamins and minerals from food (not pills) whenever possible.

Keto isn’t the only healthy diet. Studies have shown, for instance, that a whole foods Paleo diet can mitigate diabetes, and that intermittent fasting regimens can improve body composition[*][*].

And despite the claims of many low-carb fanatics, carbs — unrefined carbs, at least — aren’t evil.

Take the examples of the Kitiva islanders and traditional Okinawans.

Both populations consume most of their total calories from whole food carbohydrates and enjoy remarkably good health[*][*]. So no — minimizing carb intake isn’t everything.

The lesson is clear: To improve your health, eliminating processed foods is the single most important thing you can do. Get that right, and you’ll be ahead of most.

The Takeaway: Do What Works For You

When it comes to eating healthy, low-carb keto isn’t the only game in town.

If keto doesn’t work for you — if it doesn’t help you accomplish your goals or improve your wellbeing — don’t push it. Try something else.

Whatever that something else happens to be, just make sure it aligns with the whole foods principle. In other words, don’t eat processed food.

Instead, pack your diet with plenty of colorful vegetables for vitamins, minerals, and fiber, high-quality protein to support growth and healing, and healthy fats to build hormones, neurotransmitters, and increase nutrient absorption[*][*].

2 thoughts on “Does Low-Carb Keto Work For Everyone?”