Could the ugliest vegetable be the secret to weight loss and better memory?

To see the benefits and delicious potential of this nubby, narly vegetable, you’ve got to get past it’s appearance and dig into its flavor.

Is celeriac the same thing as the celery we’re all familiar with?

Celeriac is the hypocotyl or tuber of a type of wild celery native to the Mediterranean Basin. Even if the same type of celery seeds are planted, the crop won’t be used for both celery and celeriac as the key to delicious celeriac is to harvest when the shoots, aka celery, are still immature.

The current trend in Peru is to harvest these tubers in their utmost immature stage for maximal flavor and thus no celery stalks are to be had.

Celeriac has been known and used for its health purposes in Ayurvedic, North African, Arab and Eastern medicines for centuries[*][*]. Studies as recent as a week prior to the publication of this piece continue to sing the praises of celeriac.

Read on to discover how celeriac can keep you keto while packing flavor and a ton of health benefits.

The Interesting History of Celeriac

Celeriac is slowly gaining in popularity in North America, but it’s been a staple in Europe for a long time. Like a really long time. Like Homer mentioned it in the Odyssey as selinon, long time.

Originating in the Mediterranean, celeriac has been cultivated in that area and Northern Europe for centuries. It’s now commonly grown in north Africa, southwest Asia, North America and even Siberia.

The Nutrition of Celeriac

Celeriac is a low-carb alternative to potatoes. 1 cup of celeriac packs only 14.4 g of carbohydrate with 2.8 g of that being dietary fiber. That leaves 11.6 net carbs in a cup of celeriac.

The nutrition benefits of celeriac go much further.

The nutritional benefits of celeriac paired with the rich flavor make this ugly root vegetable a Keto champion.

Looks aside, celeriac has a lot to offer up both in flavor and in nutrition. Long used in alternative medicine to treat a wide range of health issues, celeriac has recent research stacking up to show the scientific side of those benefits all the way down to the exact molecules involved.

Keto is not a fad diet, it’s a lifestyle. When fad diets work and then inevitably fail, it surprisingly comes down to food boredom. Being limited to a select few foods while on a fad diet makes eating a chore and thus caloric restriction ensues. Not a good sign that a diet ‘works’ because it makes eating boring.

The moment a person reaches their goal weight on their fad diet they go straight for all the foods that caused the weight gain from the start. And that is the difference between a fad diet and a healthy lifestyle.

You don’t have to dig too deep into recipes and articles about celeriac until you see mentions of the root’s strong flavor. It’s strong flavor results in recommendations to pair it with other strongly flavored foods to tone it down a bit.

This distinct flavor can liven up dishes, which in turn keeps you from getting bored and veering off course. Adding celeriac to your favor savory Keto recipes or trying out celeriac recipes is a great way to keep things exciting and on-track.

Heart disease is the number 1 cause of death in the United States. With our high-stress, toxic diet and sedentary way of life, it’s sadly easy to see why. The CDC reports that 630,000 people die annually from heart disease[*].

There’s an abundance of information out there discussing the importance of cutting back on salt for heart health, but that’s missing the other half of the equation — potassium.

Potassium is a mineral and electrolyte. Consistently eating potassium rich foods on a daily basis helps lower and then maintain a healthy blood pressure.

A cup of celeriac is only going to set you back 66 calories, but it’s going to offer up 468 mg of potassium. That’s 13% of the recommended daily value for this nutrient. That paired with the bold flavor of celeriac can liven up a dish making salt unnecessary.

The heart health benefits of celeriac continue with its high fiber content. A serving of celeriac offers up 2.8 g of fiber, which is 11% of the daily value.

Fiber is great for heart health for a variety of reason, a major one being its ability to help lower cholesterol. Fiber binds to bile acids, which are predominantly made up of cholesterol. Once bound to fiber, they pass through and exit the body in stool. The body then has to pull cholesterol from the bloodstream to make more bile acids and in this way fiber helps lower cholesterol levels.

A serving of celeriac boasts 64 mcg of vitamin K — an impressive 80% of the daily value. Vitamin K helps pack away calcium into the bones instead of allowing it to be enveloped into plaques in the bloodstream. In this way a diet rich in vitamin K keeps the heart and entire cardiovascular system running well[*].

The same fiber that helps lower cholesterol levels as it passes through helps keep the digestive tract toned and running smoothly.

The intestinal tract is lined with smooth muscles. These muscles churn to keep food moving from one end to the other. This movement is known as peristalsis. Just like any other muscle in the body, these muscles need worked to stay strong and healthy.

With one cup of celeriac providing only 66 calories, but 11% of the fiber you need in a day, it will help keep your weight in check while keeping your digestive tract running smoothly.

This is based on the recommendation of 14 grams of fiber per 1000 calories consumed[*].

As mentioned above, celeriac is loaded with vitamin K, which is a key nutrient for healthy bone metabolism.

Despite their strong, rigid, structure, bones are very much so live tissues that is constantly breaking down and being built up. You want both processes to go as well as possible, for as long as possible to prevent osteoporosis later in life.

The National Osteoporosis Foundation estimates that 54 million Americans have osteoporosis or have a significantly low bone mass that puts them at risk for developing osteoporosis[*].

Vitamin K supports osteoblasts, a type of cell responsible for building up bones, and works in conjunction with vitamin D to regulate osteoclasts, the cells that break down bone. This regulation helps keep the rate of build up as close to consistent with breakdown as possible. Although, over time a certain about of bone loss with age is normal[*].

#5 Antioxidants for Health and Glowing Skin

Typically we associate vitamin C with oranges, although strawberries and bell peppers back far more vitamin C. The last place you may expect to find loads of vitamin C is in the ugliest tuber in the vegetable family.

Great example of not judging a book by it’s cover. Nubby or not, celeriac has over 20% of the vitamin C you need in a day.

Vitamin C is a strong antioxidant that prevents and undoes the damage caused by free radicals[*]. Free radicals cause damage to healthy cells and overtime can turn them into cancer cells. VItamin C, fomerally known as ascorbic acid, not citric acid, plays a pivotal role in collagen synthesis, which in turn makes it a key nutrient for proper skin cell formation. The antioxidant properties of vitamin C give it another role in skin health in preventing and healing UV damage[*].

To get the most out of the vitamin C found in celeriac, eat it raw. Ascorbic acid is heat labile and thus cooking destroys the majority of it, especially at high heat.

How to Buy and Store Celeriac

As with most root vegetables, celeriac is in its prime during late summer and fall. Choose a small tuber that is heavy for its size with minimal dark spots.

If kept at cool temps between 32°F and 41°F and kept from drying out, celeriac will last 6 to 8 months. Make sure to remove the fine stems around the base of the celeriac or the center will rot during storage.

Do not peel celeriac until ready to use.

Because of it’s high vitamin K levels, individuals with blood clotting disorders and/or who are taking medication to prevent blood clots need to speak with their primary healthcare provider or nutrition professional regarding celeriac consumption.

Large amounts of celeriac are not recommended for women who are pregnant. People who are on diuretic medications or have renal issues need to discuss celeriac consumption with their doctor due to potassium and phosphorus content. Always follow your healthcare provider’s medical advice.

Because of celeriac’s nubby nature, dirt and debris can easily get caught in its peel. To avoid ingesting potential contaminants, use a soft brush to thoroughly clean it prior to cutting. Cutting a dirty piece of produce inoculates the germs found in the peel into the flesh.

Celeriac is always eaten peeled. Use a sharp, serrated knife and use caution as the peel can be difficult to cut through.

Celeriac makes a great low-carb replacement for both rice and potatoes. Simply use grated celeriac in place of rice, quickly boiling it for texture and temperature. Swap out potatoes at a 1 to 1 ratio to make mashed and roasted potato recipes. 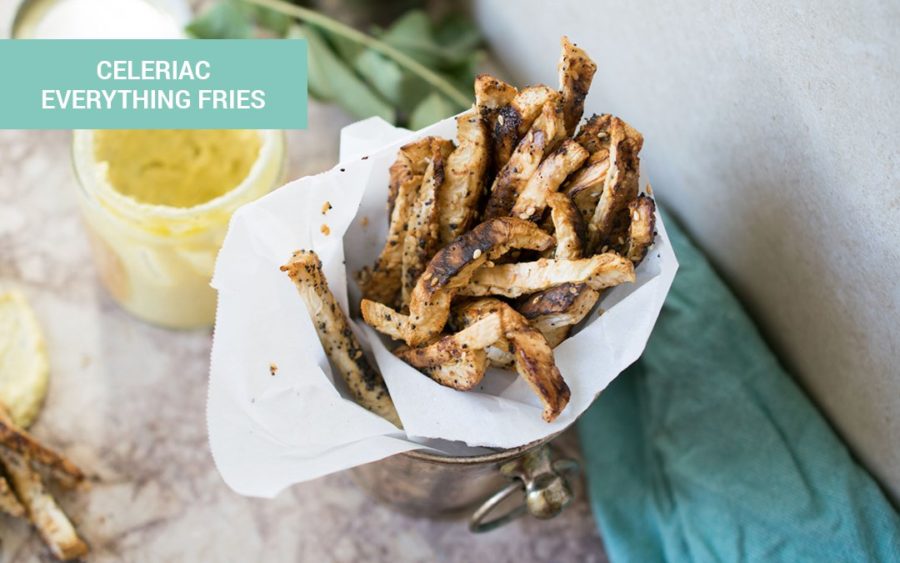 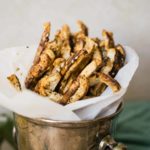 There are a few root vegetables you can enjoy on the ketogenic diet, and celeriac is one of them. Try these celeriac everything oven fries when you’re craving fries but don’t want to sacrifice your macros.

Here’s another Celeriac Recipe that you can try:

We’d be remiss to leave out the most famous celeriac recipe of all time – Celeriac Remoulade. Relatively new to the U.S., Celeriac Remoulade is a staple in France. This is the French version of coleslaw and it’s much healthier — more nutrition with way less calories and nearly no carbs. It was keto friendly before anyone knew what keto friendly was.

Celeriac Is Worth A Try

Beauty is in the eye of the beholder and always skin deep. See beyond celeriac’s appearance to enjoy one of the healthiest foods around. This tuber can be the secret ingredient in your next hit recipe and to your keto lifestyle success.