What are the best keto syrups for pancakes?

Can you even have pancakes and syrup on a ketogenic diet?

While you probably already know most boxed mixes and pancake syrups are anything but keto-friendly, there are a few ways to add this morning staple to your low-carb meal plans.

This resource covers everything you need to know about the best keto syrups for pancakes and waffles, including which to avoid and which are safe. There’s even a recipe for homemade low-carb maple syrup at the end.

Before getting to all of that goodness, there are a few details you need to consider about pancake syrup and maple syrup first.

Most popular pancake syrups at the grocery store are really just a mix of[*]:

Nostalgic favorites like Aunt Jemima, Mrs. Butterworth’s, and Log Cabin can clock in at anywhere from 37g of sugar to 53g of total carbs for one serving due to those ingredients[*][*][*].

But while pancake syrup may be a highly-processed food, real maple syrup comes from the natural sap of the maple tree. The sap gets boiled down to concentrate the natural sugars into maple syrup.

Pure maple syrup doesn’t contain fake ingredients or added sugars. Some maple syrups even have between 2% and 35% of certain vitamins and minerals your body needs[*].

So does that mean a small serving of real maple syrup is better for you?

The natural sugars — averaging 27g of total carbs per serving — will still affect your body the same way[*].

And on a keto diet, that may mean getting kicked out of ketosis.

You also have to consider the serving size, which is just two tablespoons. That’s a lot less than most people actually use on their stack of pancakes, waffles, french toast, or oatmeal.

So what about sugar-free versions of maple syrup?

Are those okay on keto?

Are Sugar-Free Maple Syrups Okay on a Ketogenic Diet?

Pure maple syrup and pancake syrups that mimic it but don’t actually contain syrup are off-limits on keto. Period.

But sugar-free versions are a little trickier to handle.

The short answer is not all of them are okay.

And the reason for this comes down to the ingredients, which is an issue with many sugar-free packaged foods.

Oftentimes no-sugar syrup options contain artificial sweeteners, chemical flavorings, preservatives, and other harmful ingredients that sabotage your health and your chances of reaching success on keto.

So even though the bottle may say low-carb and sugar-free and technically be safe on keto macro-wise, it may not actually be good for you.

Load up your diet with foods like these and you’re going to struggle to reach your health goals.

To avoid that uphill battle, you need to understand which ingredients to pass on.

Since most people are visual learners, here are a few labels from popular sugar-free pancake syrup options to compare.

See if you can spot what’s wrong with them before the answer is revealed: 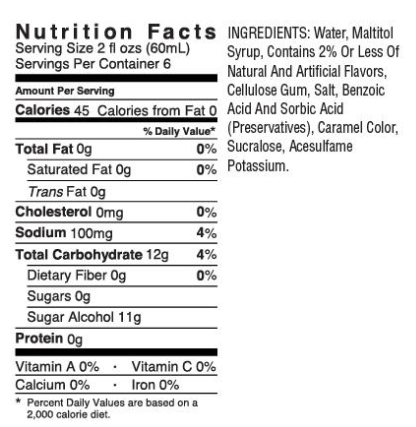 Looking at this nutrition label, the 12g of total carbs may have jumped out at you, but that’s not the only concern[*].

While 11g of that total carbohydrate amount comes from sugar alcohols, this is still not a keto-friendly option because of the ingredient list.

Artificial flavors, preservatives, caramel color, and fake sugars like sucralose should be avoided for your health’s sake, not just for keto.

You’ll see a similar picture when you look at this sugar-free pancake syrup label[*]: 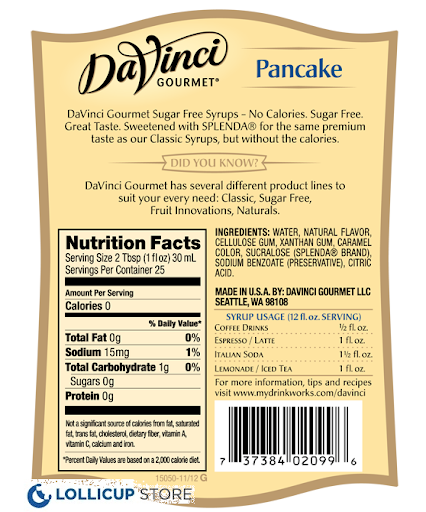 Despite the low 1g of net carbs per serving, the sucralose, sodium benzoate, and citric acid should stand out as warning signs to stay away.

As mentioned in this guide, the sugar substitute sucralose, while being calorie- and sugar-free, has been shown to raise blood sugar and insulin levels in some people and can lead to weight gain.

So if you’re consuming Splenda (the popular brand name for sucralose) or sugar-free foods containing it, you’re going to make it much harder to improve your health.

And the two preservatives, sodium benzoate and citric acid, won’t help either.

In people with asthma, sodium benzoate may trigger symptoms and asthma attacks. It can also cause stomach upsets, sleepiness, and dizziness in the general population when consumed regularly or in large quantities[*][*].

Citric acid is another ingredient to pay attention to.

Once consumed, it can lead to GI and stomach issues such as diarrhea, nausea, indigestion, and heartburn[*].

To use a real-world example, a sugar-free version of Mrs. Butterworth’s syrup has an enormous ingredient list[*]: 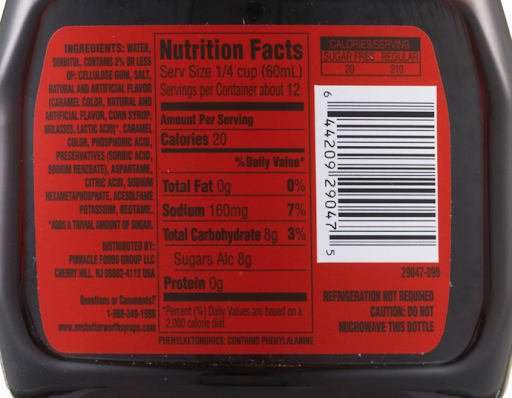 Despite what the macros say, this sugar-free pancake syrup is full of artificial flavors and colors, corn syrup, aspartame, several preservatives including sodium benzoate and citric acid, and lots of other unpronounceable chemical ingredients.

Syrups like this should be avoided whether you’re following keto or not.

But that doesn’t mean all sugar-free syrups are terrible.

To help you separate the options to avoid from the best low-carb choices to top your pancakes and waffles, you’ll need to master three simple steps.

Knowing what to look for in a low-carb syrup will help you weed out ones that don’t make the cut without wasting much time.

You may be able to find a sugar-free maple syrup that doesn’t contain artificial ingredients at your local grocery store, depending on where you live.

Start there or browse online using the search “sugar-free maple syrup” to see what your choices are elsewhere.

There’s no point in reading a bunch of ingredients if the macros don’t line up with your daily carb budget.

The total net carb amount — that is, the carbs minus any fiber or sugar alcohols — should be as close to zero as possible.

Most commercial keto syrups will come within 1-2g of net carbs per serving.

If the macros look good, you can proceed to the next step.

The right macros can’t make up for the wrong ingredients.

You should steer clear of syrups (and other packaged foods) that contain these unhealthy additions:

If you spot any of those ingredients or additives lurking on the low-carb syrup label, move on to the next choice.

Finally, check the type of sweetener used in the syrup and consider how it may affect your body.

Step 3: Look for the Sweetener Being Used

Certain sugar alcohols may cause GI discomfort, bloating, gas, and other adverse side effects in some while not affecting others.

So you’ll not only need to consider the type of sweetener in the syrup but also learn how it affects your body specifically.

Stevia and monk fruit sweeteners are two common zero-calorie sweeteners used in sugar-free pancake syrups that actually come from real foods instead of a chemical combination made in a lab.

Because of this, they don’t wreak havoc on your health like real sugar and artificial sugar substitutes. They also don’t have the same impact on your blood sugar levels.

Stevia, for example, is non-toxic and safe even at high doses.

Monk fruit comes with its own health benefits and is a potent antioxidant. It’s also considered low on the glycemic index, meaning it won’t raise your blood sugar.

If you see either of these two sweeteners on the maple syrup you’re considering, you may be in good shape.

But if you don’t have time to sift through options and find the best sugar-free syrups for your keto pancakes, you can use this short list of pre-approved choices instead.

The 3 Best Keto Syrups for Pancakes

Two of these three choices can be found online and in select stores. The final option can be made in your own kitchen.

Check them out now:

One of the most popular sugar-free keto syrups available, Lakanto Maple-Flavored Syrup is sweetened using monk fruit and erythritol (commonly sold as Swerve).

According to the nutrition facts, a two-tablespoon serving of this syrup has 9g of total carbs. But when you subtract the 3g of fiber and 5g of sugar alcohols, you get 1g of net carbs[*].

Because of the erythritol and monk fruit sweetener, there’s a net carb count of just 1g compared to the 26g you’d find in the real thing.

Plus, Lakanto’s syrup resembles real maple syrup in both taste and texture so it doesn’t feel like you’re missing out even though you’re following a ketogenic diet.

However, similar to Lakanto’s, a serving only clocks in at 1g of net carbs[*].

To get this syrup’s flavor as close to the real thing minus all the carbs and sugar, ChocZero uses an all-natural maple syrup extract.

This option is also free of GMOs and preservatives, making it an ideal choice on a keto diet if you have a sweet tooth and want to add syrup back in your meal plans.

An even better option is to make your own, which isn’t hard to do thanks to this easy syrup recipe.

In just 10 minutes, you can have your own fresh batch of maple syrup that’s sugar-free and keto-friendly.

All it takes is powdered erythritol, one cup water, maple extract, xanthan gum, and this syrup from Maya over at Wholesome Yum.

What’s great about this route is you can control all the ingredients and the carb count.

This recipe doesn’t contain any carbs, sugar, or artificial ingredients, which is exactly what you want on a keto meal plan.

The next time you’re craving syrup on your low-carb waffles, pancakes, french toast, or keto oatmeal, give this recipe a try before rushing out to the store for a commercial option that may not be any good for you.

Now that you know you can use the right sugar-free syrup in place of the real thing, you’re probably in need of some low-carb recipes made better with syrup.

While traditional pancakes and waffles call for flour and sugar, you can make low-carb recipes using almond flour, coconut flour, keto-safe sweeteners, and cream cheese for the same fluffy texture and flavor.

Fortunately, you don’t have to go far to find the best keto pancake (and waffle) recipes. Check these out:

As the high recipe ratings suggest, these options are delicious but they also make it very easy to go overboard.

So try to enjoy your low-carb pancakes and sugar-free maple syrup every so often rather than making them a daily habit. This way you’ll still be able to add flexibility to your ketogenic diet without ruining your chances of reaching success in ketosis.

For more simple-yet-mouthwatering keto recipes, check out our library of options next.

You’ll find recipes for keto chicken tenders to pair with your waffles and even a recipe for easy keto caramel sauce if you’re having waffles for dessert or syrup just isn’t your thing.