There are many more overlaps between intermittent fasting and a low-carb diet, which you’ll learn about in this guide.

Ketosis is the process of burning ketone bodies for energy.

On a regular diet, your body burns glucose as its primary fuel source. Excess glucose is stored as glycogen. When your body is deprived of glucose (due to exercise, intermittent fasting, or a ketogenic diet), it will turn to glycogen for energy. Only after glycogen is depleted will your body start burning fat.

A ketogenic diet, which is a low-carb, high-fat diet, creates a metabolic shift that allows your body to break down fat into ketone bodies in the liver for energy. There are three main ketone bodies found in your blood, urine, and breath:

Intermittent Fasting and Its Relation to Ketosis

Intermittent fasting consists of eating only within a specific period of time and not eating for the remaining hours of the day. Every person, whether they’re aware of it or not, fasts overnight from dinner to breakfast.

The benefits of fasting have been used for thousands of years in Ayurveda and Traditional Chinese Medicine as a way to help reset your metabolism and help your gastrointestinal system after overeating.

There are many approaches to intermittent fasting, with different time frames:

If you want to start fasting, one popular version is the 16/8 keto intermittent fasting method, where you eat within an 8-hour eating window (for example, 11 a.m. to 7 p.m.), followed by a 16-hour fasting window.

Other fasting schedules include the 20/4 or 14/10 methods, while some people prefer doing a full 24-hour fasting day once or twice per week.

Intermittent fasting can put you in a state of ketosis faster because your cells will quickly consume your glycogen stores, and then start using your stored fat for fuel. This leads to an acceleration of the fat-burning process and increased ketone levels.

Both the keto diet and intermittent fasting can be effective tools for:

The keto diet drastically decreases your carb intake, forcing your body to burn fat rather than glucose. This makes it an effective tool not only for weight loss, but also for the management of diabetes, insulin resistance, and even heart disease[*][*][*]. 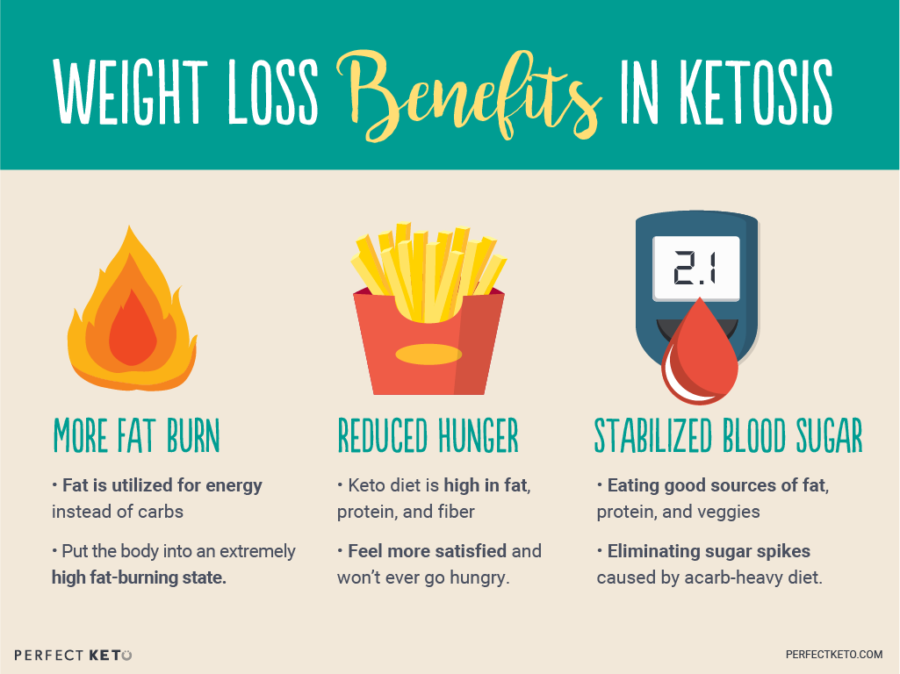 While individual results vary, keto has consistently led to a reduction in weight and body fat percentage in a wide range of situations.

Similarly, a 2004 study observing the long-term effects of a keto diet in obese people found that their weight and body mass decreased dramatically over the course of two years. Those who drastically reduced their carbohydrate intake saw a significant decrease in LDL (bad) cholesterol, triglycerides, and improved insulin sensitivity[*].

Research has shown that intermittent fasting can be an efficient weight loss tool, sometimes being even more useful than simply restricting your calorie intake.

In one study, intermittent fasting was shown to be as effective as continuous calorie restriction in fighting obesity. In studies done by the NIH, weight loss was reported for over 84% of the participants — no matter which fasting schedule they chose[*][*].

Like ketosis, intermittent fasting can promote fat loss while maintaining lean muscle mass. In one study, researchers concluded that people who fasted had better weight loss results (while preserving muscle) than those who followed a low-calorie diet, even though the total caloric intake was the same[*].

Beyond their physiological benefits, both intermittent fasting and ketosis provide various mental benefits. Both have been scientifically shown to[*][*]:

On a carb-based diet, the fluctuations in your blood sugar levels can cause fluctuations in energy levels — these are known as sugar highs and sugar crashes. In ketosis, your brain uses a more consistent source of fuel: ketones from your fat stores, resulting in better productivity and mental performance.

This is because your brain is the most energy-consuming organ in your body. When you have a clean and consistent energy supply from ketones, this can help your brain function in a more optimal way[*].

On top of that, ketones are better at protecting your brain. Studies show that ketone bodies may have antioxidant properties that protect your brain cells from free radicals, oxidative stress, and damage[*].

In one study performed on adults with impaired memory, the rise of BHB ketones in their blood helped improve cognition[*].

Glutamate helps you form new memories, learn complicated concepts, and helps your brain cells to communicate with each other.

GABA is what helps control glutamate. Glutamate can make your brain cells overly excited. If this happens too often, it can cause brain cells to stop working and eventually die. GABA is there to control and slow down glutamate. When GABA levels are low, glutamate reigns free and you experience mental fog[*].

In other words, ketones help keep your GABA and glutamate levels balanced so your brain stays sharp.

Scientists believe that intermittent fasting works by forcing your cells to perform better. Because your cells are under mild stress while fasting, the best cells adapt to this stress by enhancing their own ability to cope, while the weakest cells die. This process is called autophagy[*].

All of this means the keto intermittent fasting combination is powerful and can help improve your cognitive function, thanks to the protective and energizing effects of ketones as well as the mild cellular stress caused by fasting.

The ketogenic diet and intermittent fasting share many of the same health benefits because both methods can have the same result: a state of ketosis.

Ketosis has many physical and mental benefits, from weight and fat loss to improved stress levels, brain function, and longevity.

However, it’s important to keep in mind that if you take a milder approach to keto intermittent fasting — for example, eating within an 8-hour window — you probably won’t enter ketosis (especially if you eat a high amount of carbs during that window).

Not everyone who tries intermittent fasting aims to enter ketosis. In fact, if someone who fasts also eats high-carb foods, there’s a very good chance they’ll never enter ketosis.

On the other hand, if ketosis is the goal, you can use keto intermittent fasting as a tool to get there and improve your overall health.

If you’re new to the keto world and would like some helpful tips about how to start, here are a couple of beginner’s guides to help you with your first steps:

If you’re not sure about what kind of dishes you can have on keto, here are a few mouth-watering recipes to add to your diet plan:

29 thoughts on “Keto Intermittent Fasting: How It Relates to a Keto Diet”