Why is there so much confusion surrounding sodium when it comes to your health?

Is it because we’ve been taught that foods containing too much salt are unhealthy?

Or that you should avoid extra salt at all costs?

If salt isn’t so healthy, do you really need sodium in your diet at all?

Chances are, if you’re reading this guide, you’re hoping to sort through the sodium confusion as well.

So that’s exactly why we did the research for you.

Today’s guide will answer questions regarding:

Before you swear off the salty stuff, there’s more to sodium’s side of the story than you may know.

The Truth About Sodium: Is It Really Essential?

When you hear the word sodium as it relates to food, it may conjure up negative associations with salty, high-fat foods and high blood pressure.

While salty foods and high blood pressure certainly have a connection, this should not be the take home message.

Sodium is an essential mineral our bodies need to function properly.

Without it, your body wouldn’t be able to regulate your nerves, muscles and blood pressure. That’s because[*]:

Not only that, your body would have a much harder time finding the right balance of fluids for your system to run optimally if it didn’t have enough sodium.

Speaking of that, when you don’t consume enough salt, you’ll put your body into a state of hyponatremia, which can lead to[*]:

And in severe cases, low sodium levels can lead to seizures or even coma, which can be fatal.

That’s why it’s so crucial, no matter what diet you’re on, to consume the right amount of salt for your body each and every day.

Pause: That doesn’t mean you have a free pass to gorge on all things salty.

The fact is, eating a diet rich in salty, processed foods, *cough cough* The Standard American Diet (SAD), is just as bad for you as not having enough, as you’ll see next.

Here’s Why Salt Gets a Bad Rep

Most of us know eating foods with too much sodium isn’t a good move for our health but it’s important to understand why that is.

With the rise in processed foods and convenient Frankenfoods came higher than average intakes of salt.

Here’s the bad news: Studies have shown it only takes an extra 5g of salt per day (or the equivalent of about 1 teaspoon) to increase your cardiovascular disease risk by 17% and your risk of stroke by 23%[*].

And that’s just the beginning.

Too much sodium can also contribute to[*]:

When this happens, you’ll end up increasing your risk for urinary and kidney stones.

As your body tries to find calcium to meet its needs, it will do so by robbing your bones of this important mineral, leading to higher rates of osteoporosis.

Since these negative side effects happen when you eat too much salt, many people, especially newbie dieters, have a fear of sodium.

There’s no argument here: if you eat a high salt diet, you will increase your risks for these horrible conditions.

But that doesn’t mean you should eliminate salt from your diet altogether.

Doing so has just as many negative consequences (see the hyponatremia point in the first section if you need a refresher).

And if you’re following a keto diet, you may unknowingly put yourself into this state.

The Truth About Sodium and The Ketogenic Diet

As you saw in this guide on the keto flu, electrolyte imbalance is a common issue many new keto dieters face as they make the transition from a carb heavy, glucose-reliant diet to a fat heavy, ketone fueled one.

This happens for a few reasons.

First, you’re cutting out all the processed junk foods you used to eat.

Many of these contain far too much salt for the average person, which means when you cut them out, your body experiences a drastic drop in its sodium levels.

Your body also purges this important mineral thanks to decreasing levels of insulin, which naturally happens anytime you reduce your carb intake.

With less insulin circulating your body, your kidneys start to release excess water, instead of retaining it. When they perform this maneuver, sodium and other important minerals and electrolytes get flushed out with it.

This imbalance can throw off your entire system, leading to issues such as:

Because of this, keto dieters must pay attention to their sodium intake — and especially when making the initial keto transition.

Let’s talk about how to do this the right way.

Sodium Intake on a Keto Diet

If you start noticing any of the signs or symptoms of lacking sodium levels, you’re more than encouraged to bump up your salt intake.

Now, I’m not suggesting you load up on salty foods, rather, start noticing how much sodium you’re currently getting (by tracking your food intake) and supplement as needed.

Try weaving in an extra 1-2 tsp of salt throughout your day. We’ll talk about the best salt options on a keto diet next.

Many beginners try adding salt to their water at first. This can lead to devastating consequences if you consume too much and drink it on an empty stomach, however.

While you’ll give your a colon a cleansing salt water flush, everything will pass through you, decreasing your electrolytes even further and increasing your dehydration levels.

So this brings us to an important question: How much salt should you get each day, especially on keto?

If you’re sweating pretty intensely during your workouts, 3,000mg might be too low for you while a sedentary office worker may be just right at that mark.

Start experimenting and tracking your intake and physical feelings to discover the perfect amount to fuel your body’s needs.

You may also want to try supplementing for sodium with a tasty homemade bone broth.

It also matters which types of salt you’re letting in your body.

On the surface, all salt probably looks the same — it’s usually white and crystallized like sugar.

Yet when you go to the supermarket to pick up this underrated mineral, prepare to face a wall of options.

Which one should you choose?

Are there any salts specifically better for keto?

While plain ol’ table salt can get the job done, there are three healthier options which deliver more important minerals than simply sodium.

Here are our top three:

Sea salt is just that — evaporated sea water. As the ocean water leaves, the salt becomes the only thing that’s left.

As for its texture, you may find sea salt crystals to be slightly larger than iodized table salt and it usually packs a bigger flavor burst too.

While you can grind sea salt down and even find sea salt flakes, you still won’t have to use as much to get your desired taste because it has so much saltiness.

And, depending on where your sea salt is harvested, you may also score the following minerals too[*]:

The only downside to this briny option is the fact that our oceans are becoming more polluted each day, which unfortunately can be absorbed in the salt.

If this is a concern for you, consider using this next option instead.

This one is my personal fave and for good reason.

Not only is it bursting with a tastier, saltier flavor, it also comes loaded with minerals like[*]:

It’s these minerals that actually give Himalayan salt its characteristic light pink hue.

Plus, since this salt is mined in the Himalayas usually near Pakistan, you’re not dealing with the environmental pollutants found in our oceans like sea salt.

You’ll also notice this type of salt is usually sold in grinders or in bulk at the supermarket. This minimal processing keeps the salt close to its original crystallized form.

Grind down or use these big chunks and they’ll deliver salty flavor perfect for seasoning meats, roasted veggies, eggs and more.

In addition to sea salt and Himalayan pink salt, you’ll want to incorporate — but not solely rely on — our final salt when your goal is ketosis.

Lite salt is a mixture of 50% sodium (or table salt) and 50% potassium (from potassium chloride).

While lite salt is typically recommended for people who need to watch their sodium levels (i.e., those with high blood pressure) it’s a secret weapon for those on keto to add both sodium and potassium — two vital electrolytes and minerals you need — in one shot.

Aside from noshing on potassium-rich foods, it’s the next best option when you’re in a pinch.

Just watch out for no-salt substitutes and salt-free replacers; though they’re sold next to the lite salt, these contain zero sodium and are usually all potassium.

We’ve already established you can’t go without sodium so don’t make this mistake.

Supplement with an Exogenous Ketone Base

Before you start oversalting all your foods, there’s another, more efficient way to add 31% more sodium to your diet: by supplementing with an exogenous ketone base.

Exogenous ketones are a powdered form of beta hydroxybutyrate, or BHB, a key molecule that helps your body produce energy once your glucose stores are depleted, like when you reach ketosis.

Not only will a base like this one help your body raise its ketone levels, it also delivers:

And that’s just 1 scoop — which is far more than you’d be able to shake out of your Himalayan salt grinder and consume in one sitting.

For a guilt-free snack to help you hit your sodium needs for the day and uses the ketone base I just mentioned, try these decadent Chocolate Sea Salt Peanut Butter Bites and thank me later: 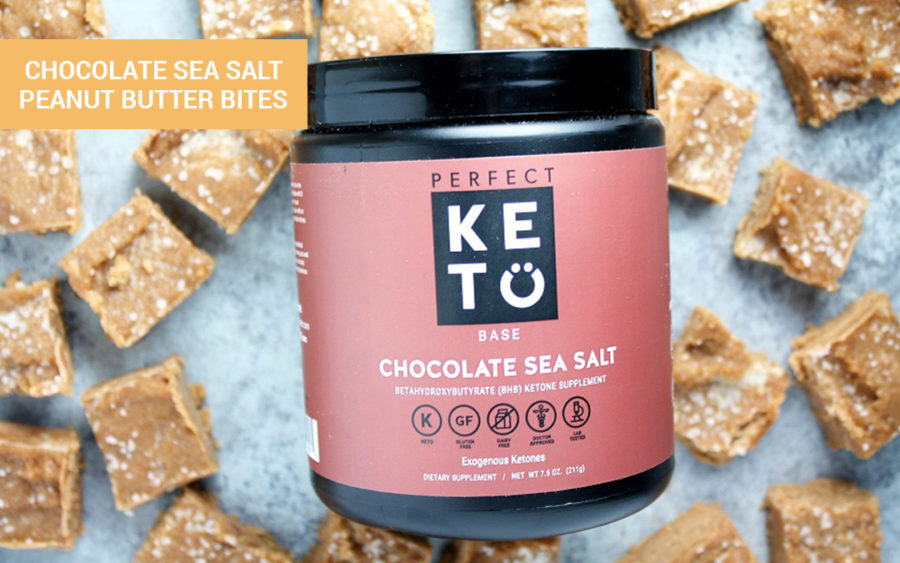 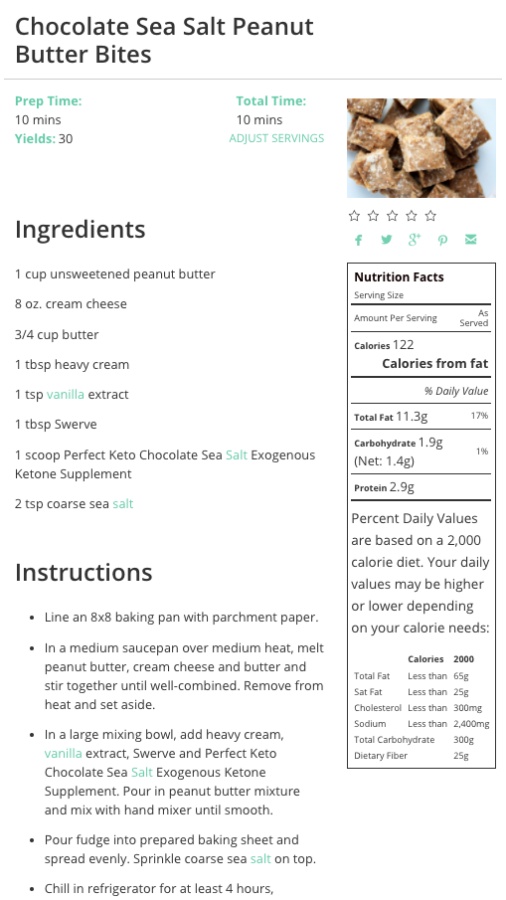 Ketone bases are a lifesaver for anyone transitioning to a keto diet.

While it may take a few days for your body to start producing enough of its own endogenous ketones, you can kickstart the process and increase your ketone levels simply by supplementing with an exogenous source (or those from outside the body).

And for anyone who may have jumped out of ketosis due to a holiday or carb-filled cheat day, you can supplement with an exogenous ketone base to help your body get back on track ASAP.

The Truth About Sodium: Don’t Fear It On a Keto Diet

With a better understanding of sodium, you should be able to pinpoint the right amount you need to keep your body happy.

Striking the perfect balance helps your body run optimally without increasing your risks for conditions like cardiovascular disease and hypertension.

To figure out how much sodium you’re currently getting, start logging your food for at least 4-6 weeks before making any adjustments.

An exogenous ketone base like this one can help you avoid the nightmare that is the keto flu and make it a piece of low-carb birthday cake to reach your sodium levels for the day.

Calcium is another important mineral you’ll need to get enough of on a keto diet. To learn more about why it’s so essential, check out this guide.

2 thoughts on “Is Salt Bad For You? The Truth About Sodium (Hint: We’ve Been Lied To)”