It can be found in a number of different dishes throughout the world, being one of the most widely distributed crops out there today. However, it first became prevalent in Mexico around 10,000 years ago. So what is this popular crop that has given itself quite the reputation?

While you’re able to buy corn pretty much all year round in the frozen food aisle, it’s hard to beat that crunchy, sweet taste you get when you bite into a fresh sweet corn straight off the grill.

What is Corn and Why Isn’t it Low Carb or Keto Friendly?

Corn (also known as maize) grain production has surprisingly passed that of wheat or rice production. But levels of high production are not strictly for human consumption. For example, much of the maize production today is used for the production of animal feed, production of corn ethanol and products such as corn syrup and cornstarch.

When it comes to corn reproduction every year, Darwin has no say.

The next generation is grown randomly, selection only half the genes from a plant to propagate. This is where breeding comes into play.

The first step in this maize breeding involves taking the seeds from the highly productive varieties of corn in their respective fields. Since the 1940’s, selection has become much more specific. For example, important traits that are highly sought after include yield amount, their nutrition profile and pest and disease intolerance.

Unfortunately, much of the corn population since then has been genetically modified (GM).

Genetically modified refers to organisms in which their genetic makeup has been altered and engineered for a certain purpose. This not only diminishes the natural nutritional value of the food, but could create a harmful reaction when consumed as well. Think about it, our bodies were never meant to consume food that had to be genetically engineered in the first place.

In 2016, it was reported than an estimated 92 percent of the US maize population had been genetically modified in some form or another. Six years prior to in 2000 it was noted that about 50 million dollars worth of food products were recalled due to the presence of Starlink genetically modified corn. This recall included 300 different products that had been approved for human consumption when it was meant for animal consumption only.

However, this GM issue isn’t the only reason to avoid this cereal grain. While the production of corn adds to negative food system practices, there’s something else to take into consideration. That would be grain intolerance. If you’re intolerant to grain, your body could react to it in a number of different ways. Some symptoms include abdominal or joint pain, anxiety, cramps, fatigue, mouth sores, skin irritation or bloating.

Whole grain corn has a similar profile to it’s fellow cereal grains, being rich in fiber, vitamins, minerals and antioxidants. About 100 grams of yellow, boiled corn comes to a total of 96 calories including 21 grams of carbs, three grams of protein, one and a half grams of fat and about two and a half grams of fiber.

Along with it’s harmful effects on both the environment and consumers, this starchy grain is not considered keto friendly, either. 100 grams, or about a half a cup, of corn provides about 18.5 grams of net carbs per serving. For one serving, this carb count is simply too high to fit comfortably within a low carb or keto diet.

Corn can be found in many dishes, but unfortunately is a bit too high in carbs to be a suitable option for a low carb or keto diet. But no need to worry. There are plenty of substitutes that not only fit your keto macronutrients, but provide you with a great deal of different health benefits as well. These low carb substitutes to corn include: 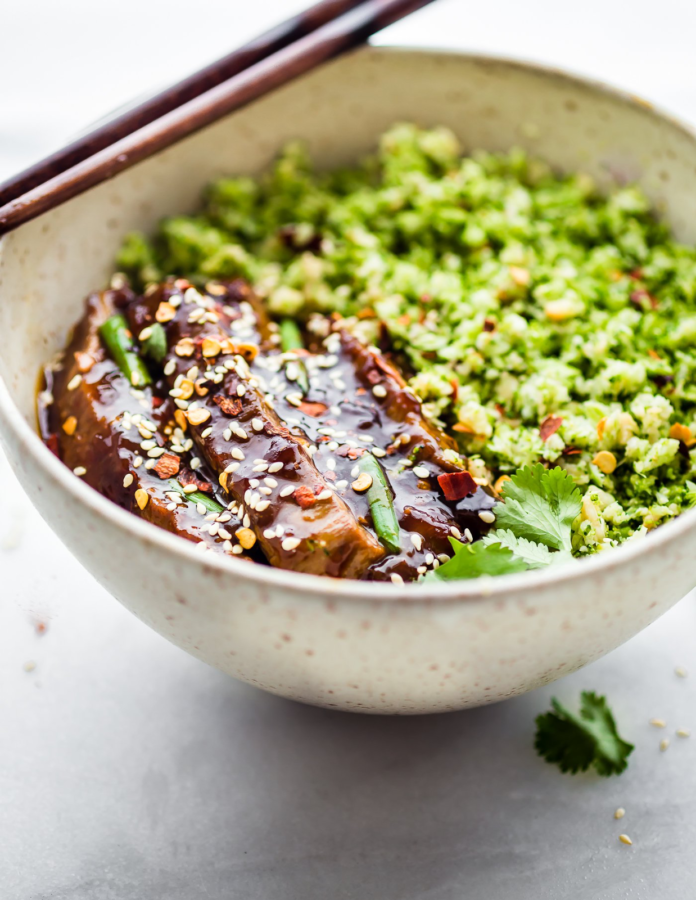 Like corn, riced broccoli is a great side to any dish, having the ability to be servinged in a hot or cold cuisine. It’s extremely versatile, with the flexibility of being used in different dishes such as burritos, bowls, salads, sushi rolls, stir fries and more. 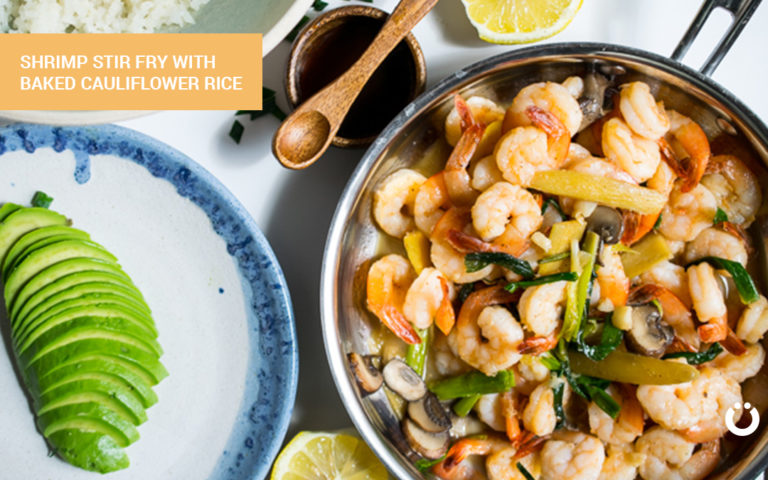 If you’re following a low carb or ketogenic diet, chance are you’ve heard of cauliflower rice (if you haven’t been eating it already). Cauliflower rice is a great low carb substitute to rice, mashed potatoes and even corn. While it may not have a sweet taste similar to corn, you can still dress it up with some grass fed butter and himalayan sea salt for the corn-flavored fix (minus the starchy carbs content).

Along with its macronutrient content, cauliflower rice is a nutritional powerhouse when it comes to micronutrients. Cauliflower provides you with abundant amounts of vitamin C, vitamin K, folate, potassium, magnesium and phosphorus.

Most stores have cauliflower rice pre-packaged and ready to go, however, you can make your own as well. All you need is a food processor (or reliable blender) and a head of cauliflower to blend up. Once you blend it up the consistency of your preference all you have to do is continue preparing it as you would any normal rice or corn and you are all set for the perfect low carb side. 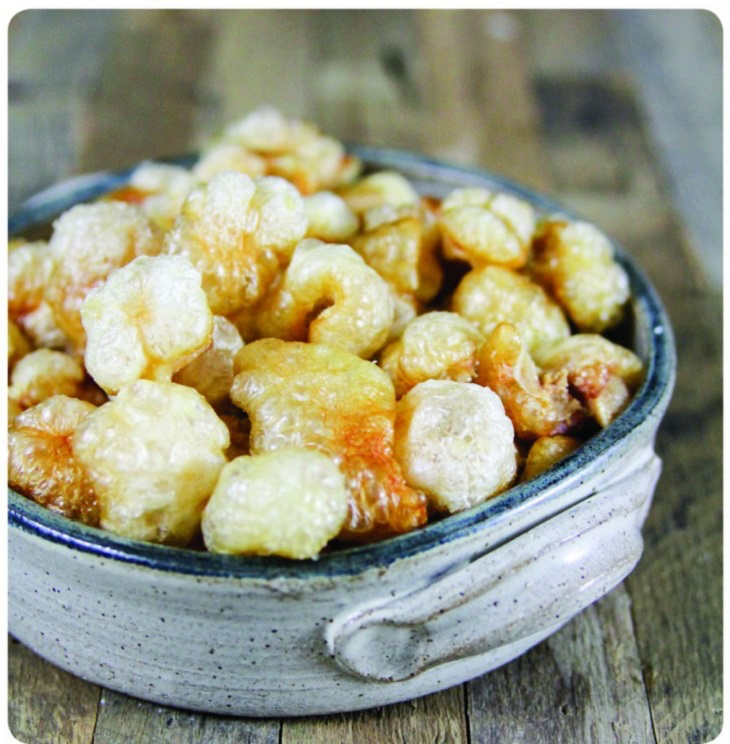 One low carb substitute for corn that may be a bit of a surprise to some people would be pork rinds. Originating from South America, it’s no surprise that corn is a staple in Mexican cuisines such as tacos and tortillas. But did you know you can make tortillas out of pork rinds as well? And that’s not the only thing you can use them for. Besides being used an an alternative to corn, they are a great substitute for breadcrumbs, nachos and other recipes that require the foods to be coated and fried.

When it comes to the nutritional profile of pork rinds, if one thing’s for certain, it’s that this snack is low carb and keto friendly (no carbs to be exact). What gives this snack it’s keto friendly properties?

One ounce of fried pork skin contains 154 calories including nine grams of fat, zero grams of carbs and 17 grams of protein. Yep, you read that right — no carbs whatsoever.

Pork rinds are made by chopping up cooked pieces of pork skin and then deep-frying them in lard. While lard may have gotten a bad reputation over the years, it’s coming back with full force. Lard is stable in high heat while being high in saturated fats, neutral in flavor, being economically advantageous, being sustainable and is conveniently found on local farms and in local stores around the country. When the pig skin is fried in lard, it causes them to puff up, giving them their fluffy appearance and crunchy texture.

No matter what your health goals may be, chances are that consuming large amounts of cereal grains such as corn will not help you come to an optimal solution. You may even have some serious allergens to this starch without even being aware of it. Not to mention the chances of an individual getting kicked out of ketosis after consuming too much corn.

Whether it’s riced broccoli, cauliflower rice or pork rinds, there’s a wide variety of foods to choose from when finding a low carb substitute to corn. These keto friendly alternatives are the perfect side dish to any meal without the worry of spiking your blood sugar or causing insulin resistance. The next time you’re at your local grocery store, pick up one of these ingredients to ensure you minimize your carb intake and maintain a ketogenic state.